New film on life and legacy of Fr. George Calciu 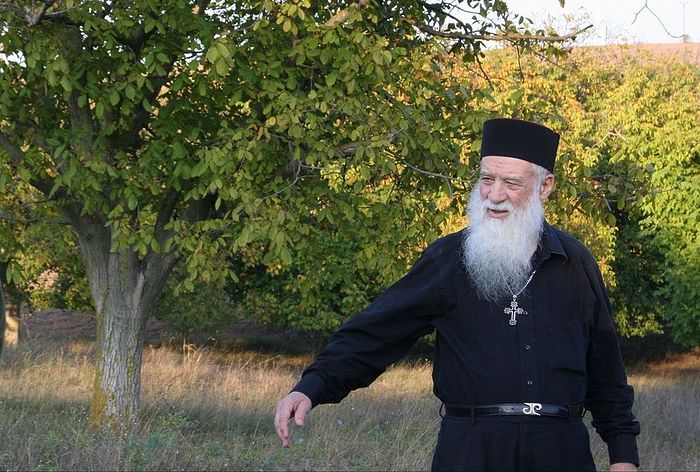 A new documentary film chronicling the life, service, and sufferings of Fr. George Calciu is now available on DVD.

The film, “7 Words: the Story of a Conqueror” is the story of a man characterized as a martyr, a teacher, a friend, a Romanian, and a life in “seven words.” Fr. George bravely endured twenty-one years of unspeakable horrors in the Romanian gulags, suffering for his bold confession of the truth of the Orthodox faith of our Lord Jesus Christ.

He was first imprisoned in 1948 at the age of 23, guilty of opposing the reigning Communist system. Despite the greatest efforts of the prison authorities to break him and rob him of the life-giving indwelling of the Holy Spirit, upon his release he demonstrated to the Romanian people that he had not been broken, not “re-educated,” but found only deeper faith. “We thought that we could have everything in this life, that we could fight against Communism. We considered ourselves saviors of our people, but God showed us who we were!” Fr. George humbly stated.

Having become a priest, he boldly addressed himself to the youth of Romanian in a series of seven homilies which have passed into sacred history as his “Seven Words.”

It is said of Fr. George in the film that “He was not only a priest but a shepherd of souls. He brought light everywhere he went.”

For his exhortations to the Romanian people to free themselves of the Communist yoke and cling to the gracious Lord he was again imprisoned in 1978 and sentenced to death. By the grace of God and thanks to pressure from the United States and other supporters he was freed and exiled to the United States, where he brought his words of fiery grace to the thirsting in Virginia.

“Fr. George’s destiny led him through a series of descents into an inferno of evil; yet by means of his brave self-sacrifice he ascended the Mount of Transfiguration.” He reposed in America in 2006 and is interred at Petru Vodă Monastery in Poiana Teiului Commune, Neamţ County, Romania.

The film draws upon video footage of Fr. George himself as well as the testimony of dozens who had been blessed to know him in his earthy life.

The film, directed by Andrei Negoita for Abis Studio, can be ordered from the official site. Book Review: Fr. George Calciu: First Century Christian
I had no idea. To be more precise, before I converted to Eastern Orthodoxy, I knew that the Orthodox Church had been harshly suppressed by the communists, but I had no idea that the cruelty of persecution often equaled that inflicted on the early church.
Comments