Patriarchate of Georgia: We are Steadfast in Our Decision which is Based on Dogmatic - not Political - Reasons 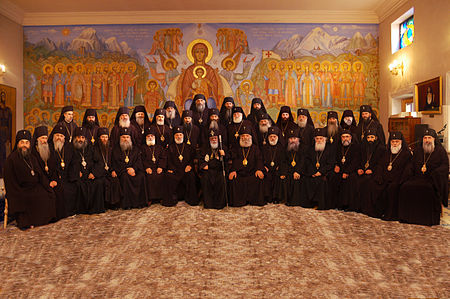 The Romfea.gr News Agency has published the June 23rd response of the Patriarchate of Georgia*to the June 17th Letter of the Patriarch of Constantinople seeking a reversal of the Georgian Church's Synodical decision to not attend the Council.

The letter of the Patriarch of Georgia, Ilia, explains once again that the reasons for not participating are entirely on dogmatic grounds and in no way influenced by political considerations.

The main points of the letter are as follows:

1. The Holy Synod did not receive the Constantinopalian Patriarchate's letter of June 13th but learned of it through the news media. This is the reason for late response.

2. It is incorrect for anyone to attribute political or related interests as the reason for our decision to not attend the Council.

3. We are praying that the Council's decision will be acceptable to the entire Church.

5. The Holy Synod has rejected this document both in its October 8th, 1998 session and again on the 25th of May, 2016. Moreover, the Church of Georgia did not accept it at the meeting of Primates in January. For those who cite our agreement to the decisions of the January Synaxis of Primates, which ordered the carrying out of the Great Council, we respond that these decisions we made before the vote of the Primates on the controversial text. We signed the above decisions for the Council in the hope that we would eventually come to agreement on all of the texts, which, however, did not come to pass.

6. Unfortunately, our Church likewise saw no fruit from our visit to the Phanar in April, when we asked that the text be removed from the agenda of the Council.

7. Even now we once again ask that this text not be included in the agenda of the Council, given that it has not been accepted on a Pan Orthodox level, nor agreed to by the Church of Antioch.

A. The text, "Relations of the Orthodox Church with the Rest of the Christian World," contains serious ecclesiological and terminological errors and, as such, must be extensively re-worked. Short of this re-writing the Church of Georgia will be unable to agree to it.

B. The text, "The Mission of the Orthodxo Church in the Modern World," likewise absolutely requires certain changes, which we have indicated.

C. The text, "The Mystery of Marriage and Its Impediments," is, in its present form, unacceptable for the above mentioned dogmatic reasons.

"We hope in your wisdom. Yet again, we express our hope that you avert the creation of problems in the body of the Church, as well as any decision-making, which will cast a shadow upon the unity of the Church."

Summary and translation of excerpts of the Patriarchal letter by Fr. Peter Alban Heers Georgian Patriarch explains why they will not participate in the Pan-Orthodox Council
Earlier the Georgian Orthodox Church made public the eleven point agenda of the meeting of the Holy Synod, clarifying the reasons why it is not participating in the Council, including “the failure to restore eucharistic communion between the Antiochian and Jerusalem Churches."

Innocent Damiano6/29/2016 8:20 pm
In light of the Georgian Church remaining Steadfast in their Decision, which is Based on Dogma, a "breaking of unity of the church"? As is stated in point 22.

"The Orthodox Church considers all efforts to break the unity of the Church, undertaken by individuals or groups under the pretext of maintaining or allegedly defending true Orthodoxy, as being worthy of condemnation. As evidenced throughout the life of the Orthodox Church, the preservation of the true Orthodox faith is ensured only through the conciliar system, which has always represented the highest authority in the Church on matters of faith and canonical decrees. (Canon 6 2nd Ecumenical Council)"

Paok6/25/2016 7:32 pm
Thank you faithful servant of Christ, dear Patriarch Ilia. I ask all our faithful brothers and sisters in Christ to stand behind the patriarch's of Georgia, Russia, Bulgaria and Antioch with prayer and support. Jerusalem is gone and so is Serbia, St. Pavle the former Patriarch of Serbia is no longer with us (may his memory be eternal) he was a true Saint and lover of truth. The real and faithful patriarch of Jerusalem was falsely accused by the enemies of Christ's church and is now dieing in exile! Yes, the EP that hates tradition so much still sends bishops that do not obey him into exile. Look up Patriarch Irineos I, and you will see that the Palestinian and Israeli governments both cleared him of any wrong doing and yet the current pseudo patriarch won't let him leave his exile based upon false and trumped up charges.

Thomas Carney6/25/2016 6:12 am
The Greeks have gone off the deep end. The Ecumenical Patriarch wants a full union with Rome which would be disastrous for Orthodoxy.
×