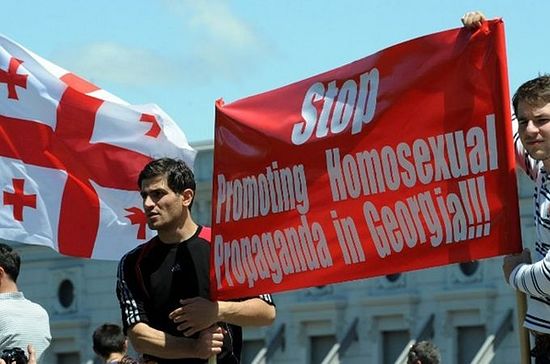 The Central Election Commission of Georgia has nullified registration of the issue presented by the Initiative Group for a same-sex marriage referendum, as reported by Interfax.

Such a decision was made as the Initiative Group failed to collect the 200,000 signatures within 3 months required under the law for the Commission to consider the issue and then to submit it to the President of Georgia.

Georgia’s President Georgiy Margvelashvilli gave his opinion on the matter, having declared that the same-sex marriage topic is contrived. By the Presidents evaluation, 99.9% of the population in Georgia believe same-sex couples are inappropriate and it is enshrined in their regulations, while the Parliament is unanimous in this respect.

In the current wording of the Constitution there is a provision stating that “marriage is founded on legal parity and the good will of spouses”. The Civil Code, in its turn, specifies that “marriage is a voluntary union of a man and a woman” which forbids making a marriage between same-sex individuals.

According to the Explanatory Memorandum to the draft law, despite the fact the article mentioned of the Civil Code conforms to the constitutional norm, “with a view to preventing wrong interpretation” it is expedient to introduce into the Constitution a “more clear and distinct” definition in order to allay “questions and fears with society at large which relate to the precise definition of marriage and family in the Constitution and Civil Code”.

Note that the initiation of constitutional amendments regarding the definition of marriage caused an ambiguous response in Georgia. In particular, there was set up an ad hoc Commission in the Parliament, which held meetings with the population in all regions form 25 March to 15 April, discussing the amendments proposed by deputies of the “Georgian Dream” coalition to the Constitution on the marriage issue. Bill against gay 'marriage' to be debated by public in Georgia

Bill against gay 'marriage' to be debated by public in Georgia
According to the explanatory note on the bill, although the mentioned article of the Georgian Constitution does not contradict the constitutional norm, “for prevention of misinterpretation” it is appropriate to add “a clearer and more explicit definition” to the Constitution that dispels “the questions and concerns of the majority of society regarding a clear definition of marriage and family in the Constitution and the civil code”.

Georgian Patriarchate asks to provide security to human rights activist from LGBT community
The statement says that, despite the fact that the Georgian Orthodox Church "condemns and considers this step (let alone the adoption of a law) to be unacceptable, violence and, naturally, manifestations of violence in its gravest form are also unacceptable."
Comments