When Jesus Only Said One Word 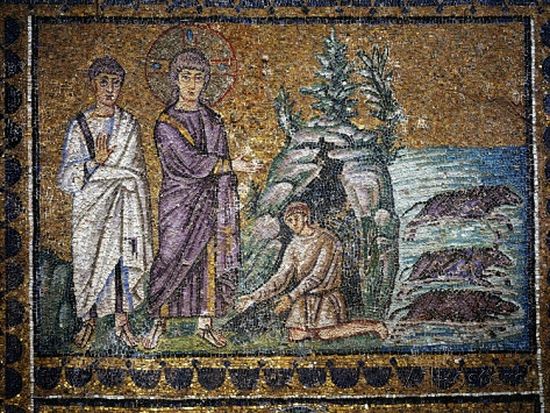 The Reading from the Holy Gospel according to St. Matthew 8:28-9:1

In the psalms we are told that the Lord spoke and the world came to be. How powerful is the word of God? He brought the whole of creation into existence from non-existence by His very word. I do not believe that there is another gospel reading quite like this one anywhere else in our Sunday readings. In this passage, the Lord Jesus Christ says only one word. Such is the power and the authority that the Lord’s words carry.

The Lord was traveling and came to the country of the Gergesenes. As the Lord walked along near some tombs, two men rushed out from among the tombs to meet the Lord. This would have frightened any of the nearby locals. They knew these men to be so fierce and so terrifying that no one would ever pass that way. They would always go around the long way so as not to be frightened or even attacked.

St. Matthew the evangelist tells us that these were not two ordinary men. There was something about them that is very important to the story. They were called demoniacs. This means that both of these men were possessed by demons. As Orthodox Christians we believe that everyone can be tempted by demons. This happens when we receive many bad thoughts or evil visions. But we can take things a step further. Just as it is possible to grow in the grace of God and to increase in our relationship with Him, we see that the opposite can happen as we slide away from God in the other direction.

We can go from merely being tempted by demons to accepting their temptations and we may even find ourselves engaging in a relationship that becomes a sort of marriage. The demons no longer tempt us from time to time but they see us and they say “here is a nice, warm, inviting place where we are welcome!” They decide that it is no longer enough to tempt from the outside, but they take over the individual. They invade his heart and mind. They infect his soul. At this point a man is spiritually dead. Only an act of God can release him, heal him and save him.

As Christians we believe in the existence of God. We believe also in the existence of spirits, both good and bad. These spirits are always around us. Some support us, and others attempt to draw us into sin and rebellion against God. Each of us has a guardian angel, and each of us is also tempted by the demons. Ultimately there are many stories of people becoming possessed just as these two men did. It is perhaps true that some of the worst cases of “mental illnesses” are in fact illnesses related to the demonic. This should not surprise us since the spiritual realm touches every human being and yet every human being is not actively engaged in the battle. Many people in the world do not know God. Many do not pray. Many do not read the word of God. Many do not receive Holy communion. Many do not fast or keep vigils. Many do not keep the commandments.

How do we know the difference between mental illnesses and demonic possession? Here are the words of a modern saint: St. Paisios says “Even a simple doctor, a devout one, can recognize this. People that are afflicted by a demon jump up or jolt when they approach anything sacred. And so, it is obvious that they have a demon. If you offer them a little bit of holy water or if you cross them with a sacred Relic, they react, because the demons inside are annoyed and pressed, whereas if they suffer from a mental disorder, they do not react at all. Even if you are wearing a cross and approach them they get worried and shaken. Once, during a vigil on Mount Athos, the fathers told me they thought that a lay person there was possessed by a demon.”

He continues… “When they bring children to my hut and tell me that they have a demon, to determine whether they are possessed, I sometimes take a piece of the holy relic of Saint Arsenios and hide it in my hand. And you should see them. Despite the fact I have both my hands closed, if the child has a demon, he stares in fear at the hand with which I am holding the holy relic. However, if he doesn’t have a demon, but, for example, a mental illness, he doesn’t react at all.”

What is the point of all of this? The point is that you should not be deceived. Christians are called to accept reality. Not the reality of the television or the Internet or the local news. Not even reality as we understand it only through our 5 physical senses. We learn reality according to Jesus Christ. His one word affirms this reality of which we are speaking. Demons do exist and they are powerful. But we can be of good cheer. One word from the Lord Jesus Christ demonstrates the existence of the demons and yet this same word also demonstrates that the Lord our God is infinitely more powerful. One word changes the lives of these men. They had lived in the tombs, like corpses, but now they were freed and granted new life by Life Himself.

St. Matthew shares this with us in order to show us a new reality but the focus of that reality is not the existence of evil. The focus of this new reality is that the Son of God is the conqueror of all manner of darkness and even death. He is the one who conquers in the same way that He creates….through the power of His word. If He has power to do all of these amazing things by His words, can we even begin to imagine what the Lord can do with those who gratefully and eagerly receive these words? Glory be to God forever, AMEN. The Demons and the Swine
Fr. Thomas Hopko
One of the powerful stories, narratives, in the gospels of Matthew, Mark, and Luke, the so-called synoptic gospels, is this event when Jesus encounters this man who is in the region of the Gadarenes or there are different names—Girgesenes or Gerasene region—this man who is totally and completely possessed by demons, filled with all powers of demons. Sky5/27/2019 6:07 pm
Hello Lori Kellerman, I hope that you will one day see this article again, as I have no idea how to reply to you.
I suggest to your friend to read the Scriptures, pray to Jesus and repent, wholeheartedly accept the Lord Jesus Christ as His personal Saviour and Lord, and to recite the 'Jesus Prayer' whenever possible (pray without ceasing). Or just simply call upon the Name of Jesus, for the Name alone have power over the demons.
I personally have some encounter with demons, familiar spirits, evil spirits, etc, and am still battling the spiritual battle, but this time NOT alone, for I have the Lord Jesus Christ to help me.
May God bless you and your friend.
I hope this helps as it did for me

Lori Kellerman5/21/2019 12:55 pm
Can anyone help? My friend has been threatening to kill he is possesed with several demons my house burnt down i had tospend night at his house his mom is scared shes going to puthim in a mental instituti o n hes 40 a nd talks to the demons all day