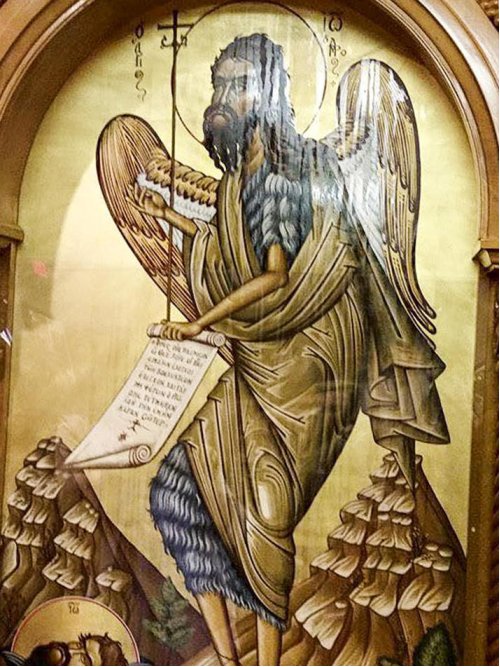 In July 2015, several drops of moisture appeared on the icon of St. John the Baptist at a Homer Glen church.

The drops turned into drips – and then streams – of a fragrant yellow oil. More than a year later, the icon continues streaming at Assumption Greek Orthodox Church, attracting crowds of people wishing to venerate the icon and be anointed with the oil.

A number of people claim they have experienced physical healing as a result of visiting the icon and being anointed; many have shared their stories with members of the church.

One of those people is Assumption parishioner and iconographer Pete Mihalopoulos, who created the “sacramental art.”

On Nov. 9, 2015, several months after the icon began to emit the oil, Mihalopoulos had hip replacement surgery. Before Mihalopoulos had the surgery, he anointed himself with the oil from the icon.

The next day, Mihalopoulos was able to walk without any help. He went home two days after surgery and resumed painting. He attended church that Sunday, again walking without a cane or walker.

“Personally, I see it as God wants to show his blessing through John the Baptist,” Mihalopoulos said. “As Jesus said, there is no man that’s greater than John the Baptist.”

Ronald Koziol, 72, of Des Plaines is Catholic, but he heard about the miraculous icon via word of mouth, perhaps through his wife, who works in Joliet, Koziol said. He believes the icon facilitated his healing.

In November 2015, Koziol saw his doctor about indigestion, learned he had stage 4 esophageal cancer and received a grim prognosis: four to 11 months to live. After receiving a second opinion, Koziol opted for aggressive treatments of radiation and chemotherapy.

Koziol said he is a “firm believer in prayer” and relied on prayerful support from family and friends as well as St. Peregrine, the Catholic patron saint of cancer patients. In May, Koziol visited the church. Many people were present that day, he said. 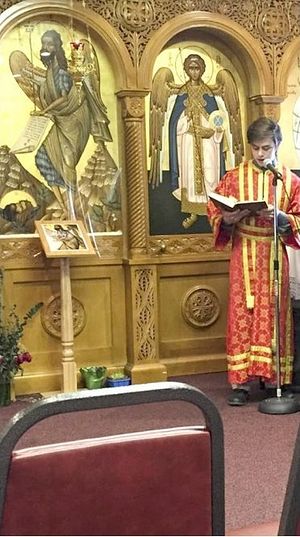 John Price of New Lenox stands near the icon of his patron saint, St. John the Baptist, at Assumption Greek Orthodox Church in Homer Glen. The icon has emitted a fragrant liquid for over a year.
Finally, Koziol was able to venerate the icon and receive anointing with the oil. He said the Rev. Sotirios “Fr. Sam” Dimitriou, the pastor at Assumption Orthodox church, even anointed his stomach, at Koziol’s request.

“Before I left, I lit a couple of candles, made a donation and they gave me a couple drops of the oil on a cotton ball,” Koziol said.

At the end of his treatments, Koziol had another PET/CT scan and learned the cancer was in remission. Koziol said his doctor was stunned and double-checked the results with a biopsy. Koziol said he even had the IV port removed from his chest two weeks ago, a sign his doctor expects the cancer to stay gone.

Koziol said he brought the test results to show Dimitriou to prove what God did for him. Koziol said he is so grateful for his healing, he plans to volunteer at a nearby children’s hospital.

“I’m very thankful where I am today,” Koziol said. “I am convinced that St. John definitely helped me, if not 100 percent cured me. There is no doubt in my mind.”

Miki Price of New Lenox said she has documented the icon and its progression of dripping oil for about a year. She takes photos each Sunday and then adds them to a Facebook page dedicated to the icon.

“People wanted to know about it and I wanted to keep them up-to-date,” Price said.

Price said the phenomenon first occurred four days after The Herald-News ran a story about her family’s conversion to Orthodoxy. She said her son, John Price, who wants to be a priest, saw the oil first.

Although she believes the icon’s miracle is meant for many people, she also feels it has special meaning for her son, as his patron saint is John the Baptist.

She also feels it relates to a dream she had before the family converted. Price said in the dream, she and her sons, John and Matthew, had gone to a house on Parker Road in Homer Glen to buy some honey. The house was beautiful on the outside and in great disrepair on the inside.

Later, when Price told her dream to Dimitriou, he told her when the church moved to Homer Glen, it had considered making its home on Parker Road. The Bible says John the Baptist survived on locusts and wild honey when he lived in the wilderness.

To Price, these events are connected.

Assumption Greek Orthodox Church is located at 15625 S. Bell Road in Homer Glen. For more information on service times and visitation times for the St. John the Baptist icon, call 708-645-0652 or visit www.assumptiongreekorthodox.org.

For updates on the icon’s activity, visit www.facebook.com/Stjohnhomerglen/home. Thousands flock to 'miracle' icon at south suburban church
Since July, tiny droplets of fragrant oil have trickled down an icon of St. John the Baptist in front of the altar at Assumption Greek Orthodox Church in Homer Glen. Parishioners believe the oil has healing properties and that its origins are a blessing from God. Oil from Icon Is a Sign of Saint’s Presence
Presvytera Vassi Haros
An icon of St. John the Baptist on the iconostasis of the Assumption Greek Orthodox Church in Homer Glen, Illinois has been streaming myrrh since mid-July. On the Miraculous Icon of the Theotokos of the Akathist Found in the Holy Monastery of Zografou on Mount Athos
The holy icon through which the elder had heard the voice of the Mother of God warn him of the arrival of the enemies of Christianity had been placed inside the tower together with the martyrs-to-be. Afterwards, however, it was found wholly unscathed by the fire which burnt the monastery to the ground.
Comments
×