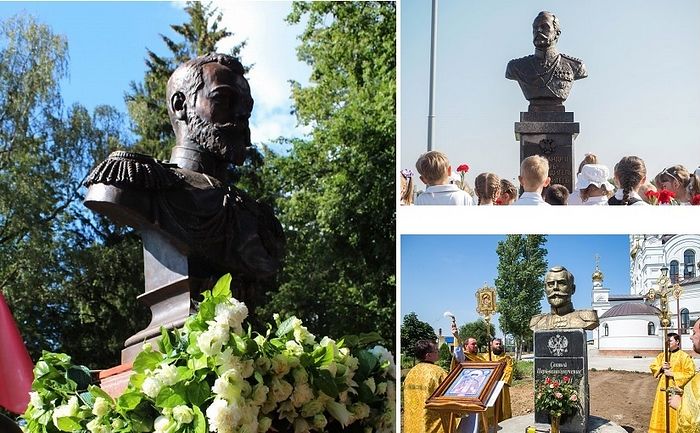 In recent weeks, new monuments to the Russian emperors Alexander II and Nicholas II were unveiled in Russia.

While more and more monuments to Lenin and other prominent Bolsheviks and Soviets disappear from the Russian landscape, cities and towns across Russia are planning to restore busts and statues lost or damaged during the Revolution, while others plan to erect new monuments to Russia's emperors and empresses.

A memorial bust to Emperor Nicholas II (left) unveiled in the city of Kaluga, on 31 July, 2016.

The monument marks the historic visit of Nicholas II to Kaluga in 1904, after his arrival from Ferzikovo, where he blessed the troops heading to the front of the Russo-Japanese war..

A memorial bust to Emperor Alexander II (upper right) was unveiled in Mikhailovsk, located in the Stavropol region of the Caucasus, on 26 July, 2016.

After the murder of Tsar Liberator in 1881, local Cossacks erected a memorial bust in Mikhailovsk. After the Revolution, the bust was destroyed by the Bolsheviks. The new bronze bust was created by Stavropol sculptor Nikolai Sanzharov.

A memorial bust to Saint Tsar Nicholas II (lower left) was unveiled and consecrated at the Cathedral of the Holy Trinity of Volgodonsk on 17 July, 2016.

The monument was created and established through the efforts of sculptor Victor Grishchenko and Nikolai Ivanovich Krivoshlykov. Restored Kokoshnik of Grand Duchess Olga Nikolaevna
Paul Gilbert
The kokoshnik was originally commissioned to mark the 300th anniversary of the Romanov dynasty in 1913. It was made in the Nicholas Starotorzhsky Monastery in Kostroma. The Real Romanovs: Russias Absolute Dynasty - New BBC Documentary
Lucy Worsley travels to Russia to tell the extraordinary story of the dynasty that ruled the country for more than three centuries.
Comments
×