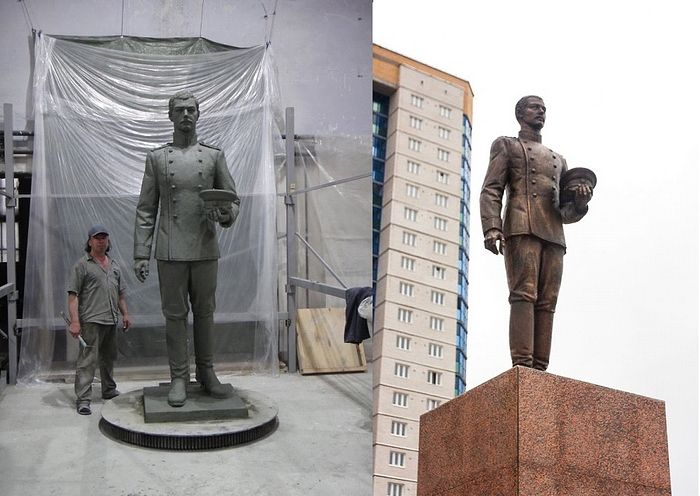 In his studio, sculptor Konstantin Zinich puts the finishing touches on his sculpture of Tsesarevich Nicholas Alexandrovich (left); the finished monument now stands on Cossack Square in the Russian City of Chita (right)

A monument of Tsesarevich Nicholas Alexandrovich (the future Emperor Nicholas II), was unveiled 11th August on Cossack Square in the Russian city of Chita. It is the only monument in Russia which depicts Nicholas II as Tsesarevich

Chita is the administrative center of Zabaykalsky Krai, Russia, located at the confluence of the Chita and Ingoda Rivers and on the Trans-Siberian Railway, 900 kilometers (560 mi) east of Irkutsk.

The monument was created to mark the Tsesarevich’s visit to the Trans-Baikal region, where he spent 11 days in June 1891. During his visit to the region, the heir to the throne assisted with developments in education, and supported the establishment of new institutions, and the Chita trade school.

Standing proud, his young face, strong chin, the future emperor directs a confident gaze to the future of Russia. The bronze figure of the young Tsesarevich stands more than 2-meters in height, and is set on a 4-meter granite pedestal.

The cost of the monument was 2.5 million rubles. Funds for the monument were collected around the world, including the descendants of Trans-Baikal Cossacks living in Australia, plus major financial support provided by the Trans-Baikal Railway. Emperor Nicholas II is especially revered by the Cossacks, because he served as the Most August Ataman of All Cossack troops of the Russian Empire.

The creator of the monument is the famed Krasnoyarsk sculptor Konstantin Zinich, who is an honorary member of the Russian Academy of Arts. The unveiling of the monument took place with great pomp and ceremony. The event opened with the playing of the anthem of the Russian Empire, "God Save the Tsar," followed by local folk dancing, singing and an honourary 5-gun salute.

"In unveiling this monument to Tsesarevich Nicholas Alexandrovich, we restore historical justice and acknowledge that much of the planning and commitment by this man played a significant and positive role in the development of the Trans-Baikal", organizers said.

One of the initiators of the monument, the deputy of the regional Legislative Assembly Alexander Filonich said that the arrival of Tsesarevich Nicholas Alexandrovich in the region will always be associated with the beginning of construction of the Trans-Siberian Railway. During that journey, he stopped in 14 towns in the region, meeting with local residents, officials, clergy and merchants at each. Two New Busts of Emperor Nicholas II Unveiled in Russia
Paul Gilbert
A bronze bust of the Tsar-Martyr was unveiled at the Transfiguration Cathedarl Tambov which the saint visited in 1914, and another in Yalta to commemorate the 100th anniversary of the emperor's final visit to Crimea.