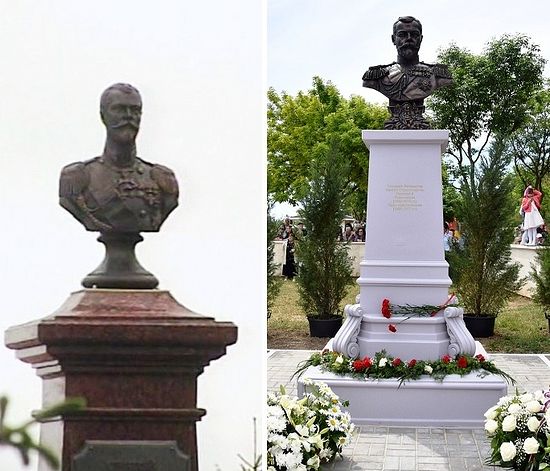 On 16 May, a bronze bust of St. Tsar-Martyr Nicholas II was unveiled on the grounds of the Transfiguration Cathedral in the Russian city of Tambov. Metropolitan Theodosius of Tambov and Rasskazovsky performed the consecration in the presence of members of the clergy, Orthodox Christians and monarchists.

In 1914, Emperor Nicholas II visited the church during a short visit to Tambov, where he venerated the relics of St. Pitirim of Tambov (glorified in 1914). In honour of this historic event a walkway was recreated from the church to the source of a nearby well, which allows the faithful to retrace the steps of Russia’s last emperor some 102 years ago.

"He proceeded along the walkway by which we today march to the source of Saint Pitirim, and drank water from it. We have historical evidence of this event," said Metropolitan Theodosius of Tambov and Rasskazovsky.

The bust of Emperor Nicholas II was presented to the church by the Orthodox Mission Branch of the Tambov Archdiocese.

A second bust of Emperor Nicholas II was also unveiled on 16 May in Yalta. The bronze bust was unveiled by Imperial Orthodox Palestine Society (IOPS) Chairman Sergei Stepashin, marking the 100th anniversary of the last visit to the Crimea by Russia’s last emperor.

Metropolitan Lazar of Simferopol and Crimea performed a liturgy in St. Nicholas Cathedral, followed by a procession along the waterfront where he performed the consecration of the bust. The solemn ceremony was followed by festivities attended by the heads of the municipality, municipal education departments of Family, Youth and Sports in Yevpatoriya.

The opening ceremony was attended by Metropolitan Lazar of Simferopol and Crimea Lazar, Metropolitan Platon of Feodosia and Kerch, the Head of the Russian Imperial House HIH Grand Duchess Maria Vladimirovna, her son Grand Duke Georgii Mikhailovich, and the head of the administration of Yevpatoriya Andrew Filonov, among other guests of honour.

The bust was established on the initiative of the Imperial Orthodox Palestine Society and its Chairman Sergei Stepashin with the blessing of His Eminence Lazarus, Metropolitan of Simferopol and Crimea. This is the second bust of Emperor Nicholas II in the Yalta area. The first was unveiled at Livadia Palace on 19 May, 2015.

Living Pictures: Nicholas II
Paul Gilbert
Krupin notes in his letter to Russia's prime minister that "after the murder of Nicholas II, the Soviet government had blackened the name of the Emperor and wiped away his achievements. We want to remind Russians that during the reign of Nicholas II, Russia was a country of strength, power and prosperity. The exhibition project will contribute to the revival of the historical truth, because the history of Nicholas II, is still shrouded in many myths which we want to dispel."