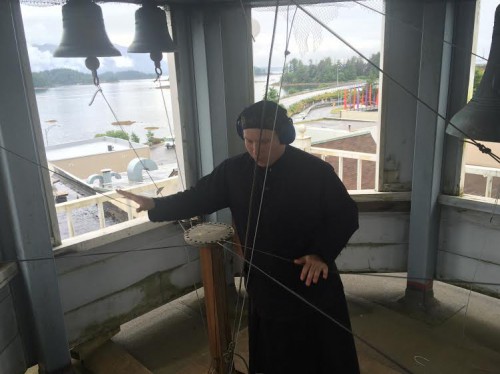 The bells at St. Michael’s Cathedral in Sitka are ringing again after a temporary hiatus, thanks to a new deacon with musical abilities and no fear of heights.

The bells of the Russian Orthodox church haven’t been played for a while.

That is, until Deacon Herman Madsen showed up.

“I always use the example of the medical field,” Madsen said. “The priest is like a doctor and the deacon is like the nurse to the doctor.”

He and his wife, Mary, moved here at the beginning of the summer to help with tours at the church and assist Father Michael.

It wasn’t always Herman’s plan to work for the Russian Orthodox Church.

“I was a wild child, I grew up with my grandmother,” Madsen said. “My mom and my dad sort of abandoned me. So my grandmother, at 70 took care of me. I nearly ended up in jail, but then my grandfather stuck out his neck for me.”

After spending 11 years at the academy, he debated joining the seminary for quite a while, but didn’t fully commit to the idea until he had an experience at the tomb of St. Herman in Kodiak.

“All of a sudden right next to this tree where St. Herman’s hut used to be,” Madsen explained. “Incense just started pouring out of the ground, and the smell of St. Herman’s relics, surrounded me.”

It was unmistakably a religious calling.

“I just hit the deck and said i really need to go to the seminary, I don’t have any choice at this point,” Madsen said.

He’s been in the seminary for three years. Though he has a background in music and performance, playing the bells was a new adventure.

“When I got here there was no one really playing the bells at the time. So I just started taking it up and doing it every day at noon,” Madsen said. “I didn’t take any official classes on bell ringing. Because of my background in singing and playing instruments I had an ear for that kind of thing. I also played the spoons.”

So playing the bells wasn’t too much of a stretch. There are eight bells, a full octave, which makes it easier.

The bells themselves have an interesting history.

They were made in Holland, and ordered by the Russian American company in St. Innocent. They lasted up to 1966, when an accidental fire broke out and destroyed the cathedral.

“In the fire these bells melted into clumps of metal,” Madsen said. “The men in the community gathered up all the metal, had them resent back to the original foundry, and these bells were recreated from the originals metal.”

The church was rebuilt based on 1961 drawings of the old cathedral, and featured its signature green domes and golden crosses.

Each bell is connected to a thin string, a bit thicker than a strand of yarn. Those strings connect to a podium with holes in it. The two largest bells are attached to two huge wooden pedals.

“Instead of pulling the strings, I tap all of the strings, and that’s why I can play it so fast, and in so many different ways. That’s why they sound so awesome,” Madsen said, laughing. “You get some pretty awesome exciting bell ringing that happens that gets you kind of pumped up. It’s really kind of fun.”

Herman and his wife will leave Sitka at the end of the summer with plans to come back next year, and hopefully make Sitka their home.