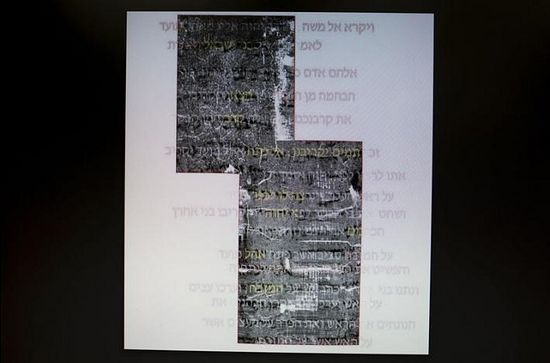 Writings, believed to be ancient Hebrew script from the bible, is displayed on a computer screen at the Israel Museum in Jerusalem July 20, 2015. PHOTO: REUTERS/AMIR COHEN.

An ancient, nearly 1,700-year-old Hebrew scroll has finally been deciphered by using complex digital analysis, revealing that it contains verses from the book of Leviticus in the Bible, scientists announced in a major archaeological breakthrough.

LiveScience reported on Wednesday that the En-Gedi scroll, which for centuries had been unreadable due to a fire that left it charred 1,400 years ago, has now been "virtually unwrapped" by researchers at the University of Kentucky.

"We're reading a real scroll. It hasn't been read for millennia. Many thought it was probably impossible to read," said Brent Seales, a professor in the computer science department at the University of Kentucky.

"The real joy came when [Pnina Shor, an expert with the Israel Antiquities Authority] sent me back the result of having read our first results, because then I knew not only were we seeing writing, but it was readable, because she and her team were able to identify it as a known text, and at that point, we were absolutely jubilant, I have to say," Seales added, according to Fox News.

The scroll, which was discovered in the ancient Jewish community of En-Gedi in 1970, is believed to have been burned somewhere around A.D. 600.

Archaeologists found the scroll in a chest following excavations of the synagogue's Holy Ark, but at the time reported that the parchment was "completely burned and crushed, had turned into chunks of charcoal that continued to disintegrate every time they were touched."

The exact age of the scroll itself is "tricky" to decipher, according to Sealers, but he said that radiocarbon dating methods suggest it was made somewhere around 300 A.D.

The journal Science Advances explains that researchers were able to read the burned scroll thanks to work using a micro-CT scanner, allowing the team to digitally unpack the rolled object, and analyze the lines of Hebrew text with the help of experts.

The Hebrew writing reportedly contains consonants, but does not have vowels, the study found.

Scholars, such as Michael Segal, a professor at the Hebrew University of Jerusalem and a coauthor on the study, said that they were "amazed" at the quality of the newly restored images.

"I think we can safely say that since the completion of the publication of the corpus of Dead Sea Scrolls about a decade ago, under the editorship of Emanuel Tov, the En-Gedi Leviticus scroll is the most extensive and significant Biblical text from antiquity that has come to light," Segal said.

The researchers added that the verses on the scroll include the beginning of the book of Leviticus, making it the earliest copy of a Pentateuchal book (the first five books of the Bible) ever found in a Holy Ark.

The team concluded that the En-Gedi scroll "provides an important extension to the evidence of the Dead Sea Scrolls and offers a glimpse into the earliest stages of almost 800 years of near silence in the history of the biblical text." Ancient city unearthed where David battled Goliath
Archaeologists believe they have found evidence of King David’s footprints in a mysterious two-gated city from 3,000 years ago, mentioned in the Bible’s story of David and Goliath. 2,500-Y-O Judah Soldiers' Handwriting Discovery Proves God's Word Is True, Answers in Genesis Says
If history has taught anything, it's that eventually research and science will confirm Scripture. We have an imperfect and incomplete understanding of history and science, but God's Word was ultimately written by the God who was there and who never lies.
Comments
×