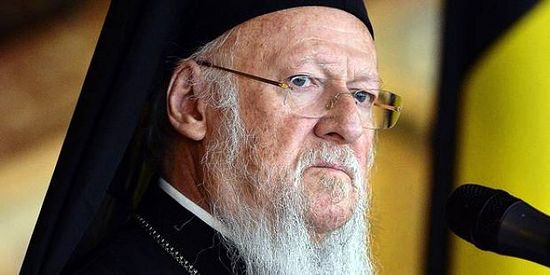 It was possible to overcome the Church schism in Ukraine twenty years ago, but pressure on Patriarch Bartholomew of Constantinople from the American ambassador impeded it.

Head of the Ukrainian Orthodox Church press service Vasily Anisimov in his interview with Radonezh Radio spoke about the meeting of Patriarch Alexei II, Patriarch Bartholomew and Patriarch Ilia II of Georgia in Odessa in 1997.

"Before the meeting Patriarch Bartholomew spoke briefly with journalists saying that in Ukraine there exists an apostate schism, which is a tragedy for those who have fallen into it, and for the whole nation. Thus, the Ecumenical Orthodox Church urges all schismatics to return to the saving enclosure of the Church of Christ, which in Ukraine is the Ukrainian Orthodox Church. The patriarchs were to sign the address, distribute it to journalists and give a press conference. We went to the patriarchal residence in the monastery to sign it,” he recalls.

Later, the patriarchs came out in silence, got in their cars and drove away.

"It turns out that the American ambassador in Ukraine called the patriarchal residence, demanding Patriarch Bartholomew to the phone, saying that the USA, which supports the Constantinople Patriarchate, support Filaret's schismatic "Kiev Patriarchate" in Ukraine and demanded that no such address be signed. One phone call, and moreover in a cynical and humilitaing form for Patriarch Bartholomew, thwarted the overcoming of schisms," Anisimov said.

Editor10/4/2016 12:07 pm
Linus, the western media along with the sold-out Ukrainian media would have you believe that no Ukrainians identify with their ancient Rus' heritage. This, I am not afraid to say, is a lie. We personally know many Ukrainians who, while loving and cherishing their own Ukrainian identity, still identify with ancient Rus' and have nothing personally against Russians. Please, for the sake of truth, for Christ's one Church, for Christian love, and for the sake of the Ukrainians themselves, take a closer and more impartial look.

Linus10/3/2016 8:23 pm
So how can one stop further schism if the Ukrainians as a people decide they no longer identify as Rus but as a new ethnicity that want their own church that's independent? As it is now, one can only choose what patriarch to belong to, like a mini-papacy.
One of the reasons for schism with the papacy was the independence of the local churches. I can't see why the schisms won't go on indefinitely as humans form new nationalities throughout the centuries.

Michael Scott Pennington9/30/2016 8:31 pm
Assuming that the story is correct, the United States would no longer have any reason to object to the reunification of the Ukrainian Orthodox Church under the Moscow Patriarchate. The Orthodox are not in any way intent on overcoming the West. If that was the fear then, it is understandable. However, today, the only objective of the enterprise known as Rus' - the Russian people, their religion, their culture - is to manage its own front and backyard, Nothing further. Rus' is concerned about global financial solvency and thus is establishing a Eurasian Economic Zone. But this need not be a threat to the West. In fact, it may help to support any turbulence the West might encounter for whatever reasons. The Russian Orthodox Church and the Russian Federation are simply interested in self-defense and the freedom to openly present its spiritual case to the rest of the world.

ChiRho9/30/2016 4:02 pm
Hmmmm let's see, who was running the USA at that time? Ah yes, the Clintons. Bill and Hillary certainly have a wonderful foreign policy legacy, don't they? Toppling stable governments to replace them with Muslim Brotherhood puppets, bombing Serbian Christians, turning a blind eye to terrorism, promoting scism in the Orthodox Church, all while enriching themselves personally.