Greek metropolitan: “How have we come down to this? Instead of rising against disgraceful sodomy, the court has summoned a bishop of the Most High God!” 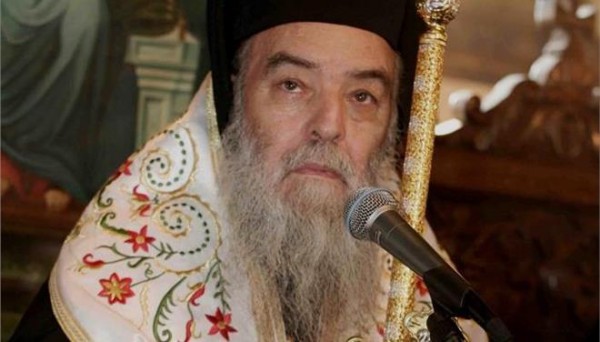 Metropolitan Jeremiah of Gortys has supported Metropolitan Alexander of Mantineia and Kynouria who was to appear before the court for his criticism of sodomy, reports AgionOros.ru.

Metropolitan Jeremiah has characterized the prosecution of Metropolitan Alexander as “disgraceful” saying: “How have we come down to this? Instead of rising against disgraceful sodomy which disparages human dignity and public morals, a bishop of the Most High God is being summoned before a judge for calling things by their proper names. The hierarch called homosexuality ‘a spiritual disease’ and as a good pastor expressed his regret and sorrow for those who are suffering from this illness. So what is he guilty of? He is guilty of calling sodomy ‘a spiritual disorder’? But it’s true! The Holy Scriptures describe any sin as ‘a sickness’ and sinners as ‘the sick.’”

In April 2016 the metropolitan of Mantineia spoke out sharply against the passage of the law on free cohabitation by the Greek Parliament: “The worst thing is that the Parliament is voting for the laws which call perversion and union of perverted individuals of the same sex ‘marriages.’”

Metropolitan Seraphim of Piraeus opposes revision of the Church tradition regarding sodomy
"It should be noted that the process of legalization of the crime against the human nature and physiology is going on: today the vile passion of homosexualism has been legally recognized; tomorrow pedophilia will be legalized; the next will be bestiality. This is the gravest crime against Eternal God and the human personality, repeating the blasphemy of Sodom and Gomorrah.”
Comments

Anthony10/17/2016 10:05 pm
''What have we come to?'' I really question whether Greece was ever actually a pious, God-fearing nation - since the country became independent from the Ottomans anyway. I recall reading about St Paisios' life - when they arrived in Greece as refugees from Asia Minor, they were shocked at the curses that were being hurled up to God from the mouths of the local Greeks in Greece. Geronda Ephraim in his book the Art of Salvation estimates that at least 8/10 Greeks hurl curses up to God and His Holy Mother on a daily basis. And myself having grown up in the Greek diaspora, can say I saw absolutely nothing in terms of piety amongst the Hellenes outside of Greece. It was in fact a certain American convert by the name of Fr Seraphim Rose who inspired me and brought about a change in my own way of life. Therefore I don't think that we can be all that much surprised at what is going on in Greece today. There is always a price to pay for sin.

Lila Jabbour10/17/2016 6:45 pm
"A time is coming when men will go mad and when they see someone who is not mad they will attack him saying: 'You are mad, you are not like us'." (St Anthony the Great) ... My fellow Orthodox Christians, it seems that time has come.
×