Icon of the Mother of God “Iveron” 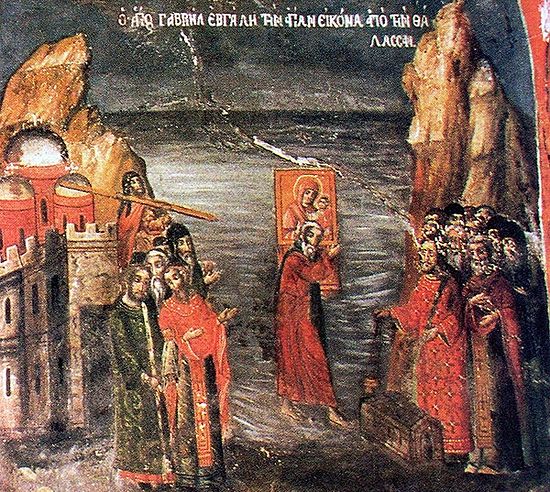 During the reign of Emperor Theophilus (829-842) the Byzantine Empire raged with the heresy of iconoclasm. In accordance with the emperor’s command, thousands of soldiers pillaged the empire, searching every corner, city, and village for hidden icons.

Near the city of Nicaea there lived a certain pious widow who had concealed an icon of the Most Holy Theotokos. Before long the soldiers discovered it, and one of them thrust his spear into the image.

But by God’s grace his terrible deed was overshadowed by a miracle: blood flowed forth from the wound on the face of the Mother of God.

The widow spent the whole night in vigil, praying before the icon of the Most Holy Theotokos. In the morning, according to God’s will, she took the icon to the sea and cast it upon the water. The holy icon stood upright on the waves and began to sail westward.

Time passed, and one evening the monks of the Iveron Monastery on Mt. Athos beheld a pillar of light, shining upon the sea like the sun (ca. 1004). The miraculous image lasted several days, while the fathers of the Holy Mountain gathered together, marveling. Finally they descended to the edge of the sea, where they beheld the pillar of light standing above the icon of the Theotokos. But when they approached it, the icon moved farther out to sea.

At that time a Georgian monk named Gabriel was laboring at the Iveron Monastery. The Theotokos appeared to the fathers of the Holy Mountain and told them that Gabriel alone was worthy to retrieve the holy icon from the sea. At the same time, she appeared to Gabriel and told him, “Enter the sea, and walk out upon the waves with faith, and all will witness my love and mercy for your monastery.”

The monks of Mt. Athos found Gabriel at the Georgian monastery and led him down to the sea, chanting hymns, and censing with holy incense. Gabriel walked out upon the water as though upon dry land, took the icon in his arms, and obediently carried it back to shore. 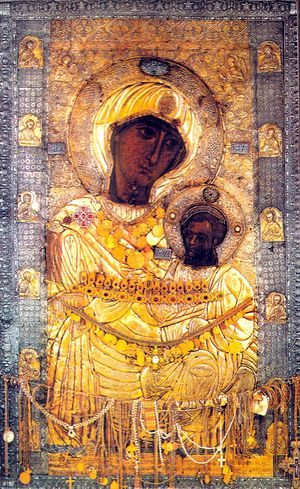 Our Lady of Iveron, Mount Athos, Greece
This miracle occurred on Bright Tuesday.

While the monks were celebrating a paraklesis of thanksgiving, a cold, sweet spring miraculously gushed forth from the ground where the icon stood. Afterwards they took the icon to a church and set it down in the sanctuary with great reverence.

But the next morning one of the monks came to light a lamp and discovered that the icon was no longer where they had left it; now it was hanging on a wall near the entrance gate. The disbelieving monks took it down and returned it to the sanctuary, but the next day the icon was again found at the monastery gate. This miracle recurred several times, until the Most Holy Virgin appeared to Gabriel, saying, “Announce to the brothers that from this day they should not carry me away. For what I desire is not to be protected by you; rather I will overshadow you, both in this life and in the age to come. As long as you see my icon in the monastery, the grace and mercy of my Son shall never be lacking!”

Filled with exceeding joy, the monks erected a small church near the monastery gate to glorify the Most Holy Theotokos and placed the wonder-working icon inside. The holy icon came to be known as the “Iveron Mother of God” and, in Greek, Portaitissa. By the grace of the miraculous Iveron Icon of the Theotokos, many miracles have taken place and continue to take place throughout the world. The Portaitissa of Moscow
Muscovites dearly loved their chapel, and always prayed before it when beginning any new work. It was called the “joyful crossroad for all the faithful.” The Feast of the Iveron Icon of the Mother of God, and the Veneration of Holy Icons
Hieromonk Irenei (Pikovsky)
The miraculous appearance of the icon of the Mother of God in the ninth century, during the era of iconoclastic dispute, was literally a confirmation “from above” of what had been pronounced at the Seventh Ecumenical Council on the veneration of icons.
Comments
×