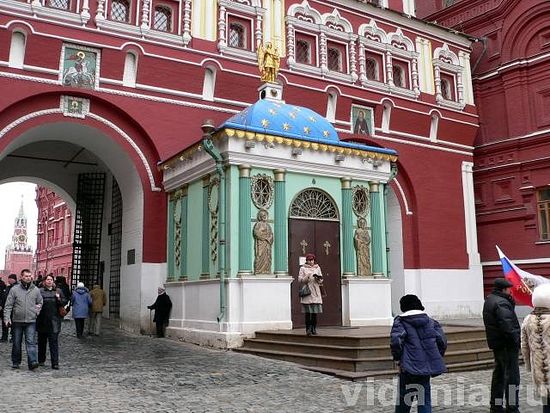 The fame of the miracle-working Portaitissa-Iveron icon of the Mother of God, which, as the Mother of God herself told the monk Gabriel in a vision, protected the monks of the Mt. Athos Iveron monastery from all harm, reached Russia through the lips of pious pilgrims in the seventeenth century. During the reign of the God-fearing Tsar Alexei Mikhailovich, Archimandrite Pachomius of the Iveron Monastery came to Moscow to collect alms for his monastery. Abbot Nikon of Novospassky Monastery, the future Patriarch Nikon, asked that an exact copy be painted of the icon and brought to Moscow.

This request was fulfilled by the Iveron iconographer Yamvlikh Romanov, and a copy was painted that resembled the original to the last detail, differing in nothing. 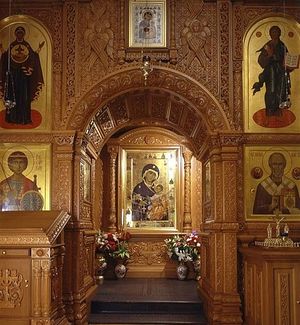 On October 13, 1648, the icon was solemnly met at the gates of the “Kitai City” of Moscow outside Red Square, and placed temporarily in the St. Nicholas monastery. After some time, the icon was sent to the Valdai Monastery, now known as the Iveron Valdai Monastery, and yet another copy was ordered from the Mt. Athos monastery to be sent to Moscow.

It arrived in Moscow on May 19, 1669, and was placed in the Neglineny tower at the same city gates, protected by an awning. This was the beginning of the Iveron chapel in Moscow. These were the gates through which the Russian Tsars would perform their solemn entry into Red Square, and thus they were also called the “Triumphal Gates”.

As time went on, more icons were added over the gates, beginning with an icon of the Resurrection. In the early eighteenth century, during the reign of Empress Elizabeth Petrovna, the old wooden structure was torn down and a stone structure was built to house the Iveron Icon. It was completed in 1791, when more adornments were added. The chapel was small—it could hold no more than fifty people. 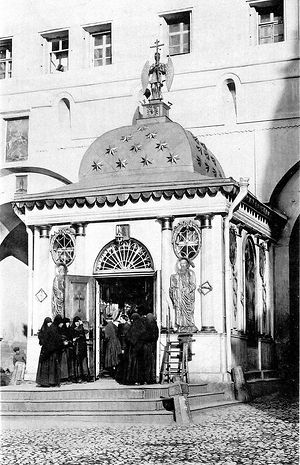 Muscovites dearly loved their chapel, and always prayed before it when beginning any new work. It was called the “joyful crossroad for all the faithful.” And the icon was revered not only by the faithful—Catholics, Lutherans, sectarians, and even people of no religious affiliation would come to the Gate-Keeper of Moscow and bow before the famous miracle-working icon with faith in the help that came through it from the Mother of God. People of all walks of life made the Iveron chapel the first place to visit before any important undertaking—merchants before business ventures, students before exams, and anyone who wanted a blessing to begin some work. Healings of the sick also occurred after prayer before the Iveron icon.

The icon would also be taken to homes where molebens were served for the sick, and for that reason another copy was made to replace it in the chapel during these travels. The fact that there was a copy made has given rise to confusion as to the whereabouts of the original after the Bolshevik revolution. There is a church in the Sokolniki region in the northern part of Moscow dedicated to the Resurrection of Christ, which was never closed under Communist rule. Its main shrine is the Iveron Icon that was taken there after the Communists destroyed the chapel. However it is not known for certain whether this Iveron icon is the original, or the copy.

Visitors to Moscow would first come to the Iveron chapel to receive a blessing from the Mother of God.

Only during the War of 1812 was the Iveron icon taken out of Moscow, to the city of Vladimir, to protect it from the impious French soldiers who were desecrating and robbing Moscow churches. It returned after two months, and played a central role in the annual solemnities commemorating Napoleon’s retreat from Moscow: A procession would begin from the Kremlin towards the chapel, where the Iveron icon would be recieved and carried reverently around the Kremlin walls. 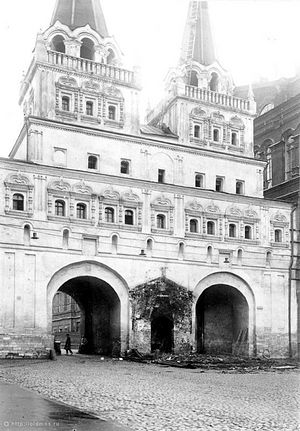 1929
The Iveron Chapel was considered the heart of Moscow, and so when the militant atheist regime took over it drew particular attention to its desecration. Showing its full satanic and antichristian face, the Komsomol (Young Communists) organized a special demonstration on Christmas Eve, 1923. The act was named, “Komsomol Christmas”, and took place in front of the Iveron Chapel. A huge crowd dressed up as highly unflattering caricatures of Orthodox priests and monks. They made a “procession” from another part of central Moscow, carrying in place of religious banners, signs with indecent proclamations, and effigies of various ancient gods and deities from other world religions—Osiris, Marduk, Allah, Buddha, and blasphemous images of the Lord of Sabaoth, Christ, and the Mother of God. Others in the crowd dressed up as Protestant pastors, rabbis, the Roman Catholic pope, and Chinese sages. The leader of this unholy legion sang at the top of his lungs an “akathist to Marx” with the refrain, “Rejoice O Marx, great wonder worker!” A huge bonfire was lit in front of the Iveron Chapel where they burned icons and other sacred objects while singing an infernal song:

We’ll tear down all the gods on earth
Squeal you devils with glee!
We’ll dance a carmagnole!
All the gods at the carnival!
Let the godless Komsomol rage!

The Iveron chapel was soon demolished and a statue of a worker installed in its place—the new, socialist “gate-keeper”. In 1931 the Resurrection Gates were also torn down to make way for automobiles.

After the fall of Communism in the early 1990’s, Moscow yearned to revive its religious heart. Once again, a copy of the Iveron icon was ordered from the original on Mt. Athos—the third copy to be ordered by Moscow. In November 1994, His Holiness Patriarch Alexei II consecrated the cornerstone of the new Iveron Chapel and Resurrection Gates. At the decision of the Moscow government the chapel was completed in less than a year; it was opened on October 25, 1995—the eve of the present feast—and stands there again, as if it had never left. 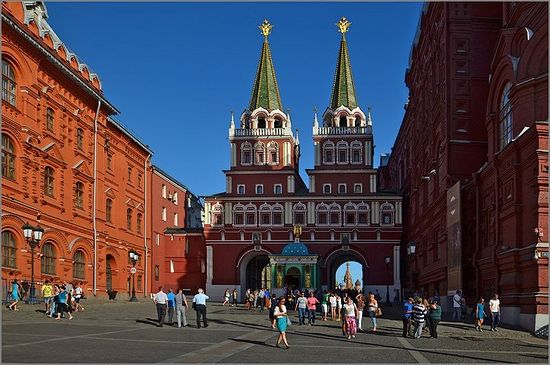 Now the Orthodox priests of Moscow take turns serving continual Akathists and molebens inside the chapel before the Iveron Icon of the Mother of God, and visitors to the famous Red Square all pass through the Resurrection Gates and past the grace-filled chapel. May the holy Portaitissa always protect the city, and all her faithful children everywhere!

Compiled from an article by Elena Lebedeva, Pravoslavie.ru The Feast of the Iveron Icon of the Mother of God, and the Veneration of Holy Icons
Hieromonk Irenei (Pikovsky)
The miraculous appearance of the icon of the Mother of God in the ninth century, during the era of iconoclastic dispute, was literally a confirmation “from above” of what had been pronounced at the Seventh Ecumenical Council on the veneration of icons.
Comments

Fanya Clifton10/27/2016 4:09 am
On 1993 travel toSergey Posed where I met an old lady in her nineties who in metanoia crying told me" I was one of those comsomols throwing in red square in the fire the icons. Oh how much we enjoy that!!! Oh my God what I ' be done!!!
She was truly suffering in her remembrance of her memories!!!! I told her people maybe won't forgive but I know God already Have Forgiven he.... She died after 7 months......
×