Venerable Nicholas Sviatosha Prince of Chernigov, and Wonderworker of the Kiev Near Caves 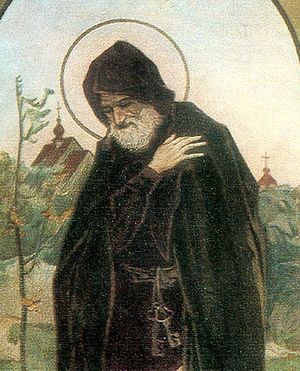 Saint Nicholas Sviatosha, Prince of Chernigov, and Wonderworker of the Kiev Caves, Near Caves, was a great-grandson of Great Prince Yaroslav the Wise and son of Prince David Svyatoslavich of Chernigov (+ 1123). Nicholas was the Prince of Lutsk, and he had a wife and children (his daughter was later married to the Novgorod prince St Vsevolod-Gabriel (February 11).

On February 17, 1106 the holy prince, left his family and was tonsured at the Kiev Caves monastery. Nicholas Sviatosha carried out his obediences with great humility. For three years he worked in the kitchen, for which he chopped wood and carried water. For the next three years, he was gatekeeper at the monastery. The saint had a garden around his cell. Out of his own means he built at the monastery the temple of the Holy Trinity and the infirmary church in the name of St Nicholas, his patron saint.

St Nicholas was the first of the Russian princes to accept monasticism, patiently enduring the reproaches of his brothers for his decision to lead a life of humble obedience. The saint’s doctor, Peter, pointed out to the royal ascetic, that such exploits of obedience had injured his health. But suddenly the doctor himself fell sick, and was healed only by the prayer of St Nicholas. Then Peter himself was tonsured.

After he had progressed through various obediences, St Nicholas took upon himself the vow of silence. When the saint received money, he used it to beautify the church, and to procure books (because he loved reading), or he distributed it to the poor. St Nicholas was a zealous peacemaker, in 1142 he reconciled the Prince of Chernigov with the Great Prince Vsevolod.

Soon after the death of the saint, his brother Prince Izyaslav fell grievously ill. The igumen of the monastery sent the sick man the saint’s hairshirt. Izyaslav put it on and was healed. St. Theodosius of the Kiev Caves
Commemorated May 3/16, September 2/15; Translation of His Relics August 14/27

St. Theodosius of the Kiev Caves
Commemorated May 3/16, September 2/15; Translation of His Relics August 14/27
Eighteen years after the Saint's blessed repose, the monastery brethren decided to transfer his relics to the new cathedral church. The abbot, together with monk Nestor the chronicler, went to the cave to dig up the relics and discovered them to be incorrupt. Accompanied by a large crowd of people, the relics were solemnly transferred to the Dormition Cathedral on August 14, 1092. And in 1106 Saint Theodosius was added to the list of canonized saints.