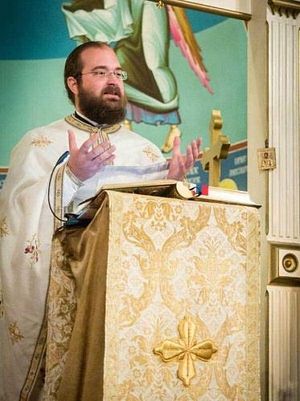 Growing up in Pennsylvania, Edwards avoided his family's Episcopalian beliefs and focused on academics.

Valedictorian of his 1996 high school graduating class, he served as student body president and editor of the yearbook.

He referred to himself as an atheist.

Then, as a student at Brown University, he began to question the meaning of life.

Edwards' spiritual inquiries led him to the Greek Orthodox Church, into which he was received in April 2003.

After graduating with a degree in religious studies from Brown in 2003, Edwards worked as a teaching assistant and master's candidate in the religion department at Florida State University. He volunteered with AmeriCorps, managing soup kitchens and building houses for people in need. In 2006, he enrolled as a doctoral student in the School of Theology at Aristotle University of Thessaloniki.

On Feb. 22, 2009, he was ordained in the holy priesthood of the Orthodox Church.

Edwards, 38, recently accepted a position at St. George Greek Orthodox Church in New Port Richey. The church, at 9426 Little Road, welcomed him as its father in October.

I asked Edwards about his path to faith, what it means to serve others and his new position in Pasco County.

What appealed to you about the Orthodox faith?

When I was in college, I was an atheist, studying Nietzsche, Sartre, etc. At a certain point, I came face to face with a real existential crisis. Why was I here? What was the purpose of my life? Was it really only to get good grades so that I can get a good job, so that I can buy a big house, fancy car? I came to realize that there was a God, but I didn't know who he was. I wanted a relationship with him because I understood that he was life. But how can you have a relationship with someone you don't know? So I changed my major in college and began studying the history of religions.

I went back to the Protestant church I grew up in. But the Christianity that was being presented to me in the U.S. didn't ring true. Disillusioned, I began exploring Buddhism, and I was attracted by its mystical prayer and contemplation. But something was missing there, too. I had never even heard of Orthodox Christianity until it was mentioned by a professor in a course about the history of Christianity. She said that the same worship service that Christians were using in the 5th century was still being used today in the Orthodox Church. I had to know where I could find this. The more I read about the history of Christianity, the more I was convinced that the Orthodox Church had preserved the Christian inheritance in a way that western Christianity had not. I was especially moved by its unchanging doctrine and its focus on mystical prayer.

Why did you decide to pursue a career within the church?

Once I discovered where the spring for the water of life was, I wanted nothing else but to be near it at all times. Everything else, my promising worldly career, suddenly paled in comparison. I felt I could do nothing else.

What is most rewarding to you about serving others?

We Christians believe that Christ came "not to be served, but to serve," Mark 10:45. He who is God assumed the form of a humble servant. For me then, serving others is an imitation of Christ. I try to do it, however, not out of some religious obligation, but out of the radical freedom that God has given me by making me in his image and likeness, just as God himself became man of his own free will.

I'm not Greek, but I learned many things in my 10 years in Greece, one of which was the concept of philotimo, which actually can't be translated into English. It means something like "freely responding with sincere goodness to the smallest good done by another." When I look at how much God has done for me, I am moved by this sense of philotimo to serve Him and others.

What do you hope to offer your new church home going forward? What do you like most about the church?

I was fortunate to spend 10 years in Greece, soaking up the world view of the country where Christianity first blossomed in Europe, the land of Thessalonica, Corinth, the land which has preserved and maintained Christianity at great cost for 2000 years. I hope to be able to bring some of this experience to the U.S. and offer a translation to contemporary American culture. My goal is simply to try to bring authentic Orthodox Christianity and most important to try to embody it in my own person and life.

The thing I like most about the parish of St. George is its warm sense of community, its friendliness and openness to outsiders, including me, a former Protestant raised in Pennsylvania. We welcome everyone to join us.

An Interview With Fr. John Musther of Cumbria
“Christ Won the Battle and Made my Heart Orthodox!”
Dmitry Lapa
Father John Musther, an Orthodox Englishman, serves in the Orthodox missionary parish of Sts. Bega, Mungo and Herbert in Keswick, Cumbria, North West England. His community, which is under the jurisdiction of the Ecumenical Patriarchate, is part of the ancient tradition of the Orthodox Church. The congregation is a living witness of the truth of Holy Orthodoxy to the people living nearby.
Comments

Anthony11/3/2016 10:17 pm
I'm quite surprised the Greek Orthodox Church never made Fr take on an ultra Greek name as they did Metr. 'Kallistos' Timothy Ware. Maybe they're a bit more open minded in the Motherland than they are in places like Englandland
×