“He spends all his time in the cathedral and even forgets to eat.”

Archimandrite John (Krestiankin) as the soviets saw him (1955)

Today is the tenth anniversary of the repose of Archimandrite John (Krestiankin). To commemorate him we present an unusual testimony to his zeal and Christian love—a sort of apophatic approach to the biography of a saintly man. It comes from reports written by the Pskov plenipotentiary for religious affairs A. I. Luzin, whose job it was during the atheist Communist period to watch Fr. John’s every move and report back on his “crimes”. Luzin involuntarily provided the future, resurrected Russian Orthodox Church with touching descriptions of Fr. John’s love of God and people—even of their graves.

Hieromonk of Sretensky Monastery Theophan (Bortnikov) found and compiled these vignettes. The bold type is his. 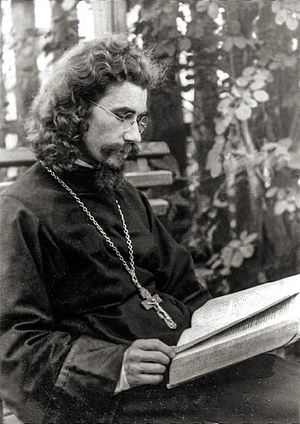 Archimandrite John (Krestiankin).
One of the main issues that the plenipotentiary for religious affairs was supposed to cover in his region was the clergy. The plenipotentiary for Pskov province A. I. Lunin gives brief descriptions of those clergymen who were of particular interest to him. Of course, he was especially interested in priests who had been recently released from prison where they had served terms for the “58th statute”.1

On June 14, 1954 an order was issued by the Presidium of the Supreme Soviet of the USSR concerning the early release of those prisoners who had served two thirds of their term, and of the aged. And then a year and a half later, on December 8, 1955, the Council for Religious Affairs of the Russian Orthodox Church circulated a letter in which the local plenipotentiaries were given the task of identifying the “loyal” clergymen in their localities, for unwritten information gathering among the clergy and parishioners.

It is in this portion of the informational report on Pskov province for the second half of 1955 that we find the name of Archimandrite John (Krestiankin), future resident of the Pskov Caves Monastery and famous elder. [Fr. John was serving in the city of Pskov at that time.—Trans.] We cite here several extremely interesting and unexpectedly instructive citations from that report:

Six priests are registered besides those who were recently consecrated, four of these priests arrived from the camps, who where released early (apparently according to the order of July 14, 1954). They had all served time, and were sentenced according to statute 58 p. 10; of these one deserves attention: KRESTIANKIN, Ivan Mikhailovich, born 1910. Before his arrest he studied in the Moscow theological academy and served in Moscow churches. From 1950 to 1955 he was in the camps. He arrived in Pskov by appointment of the Patriarchate.

First and foremost he stands out from all the other clergy for his fanaticism. He serves in the cathedral as the third priest. There are four priests in the cathedral and they serve once a week, but Krestiankin spends all his time in the cathedral. Not limiting himself to preaching only during services, he conducts talks with individual believers who come to him; he won’t let any of them go until they have understood what he said.

At the Christmas service he served the early Liturgy starting at 5:00 in the morning. After it ended, while he was giving the cross [for veneration.—Trans.], he congratulated each person with the great feast. After the early Liturgy ended, instead of going home, he remained to concelebrate the late Liturgy (two Liturgies cannot be served in one day).2 He left the cathedral last, at about 3:00 in the afternoon, and at 4:00 he again came to the cathedral to prepare for the evening service. He even forgets to eat.3

Across from the phrase, “he even forgets to eat”, in the margins of the report is an exclamation mark, and this sentence is underlined by a blue pen. The exclamation point and underline in the description that the plenipotentiary gave in his report was not accidental. Just one year later Fr. John would have to leave Pskov for several years; however there would be mention of him in subsequent reports.

Finally, in the present report there is one more interesting story. 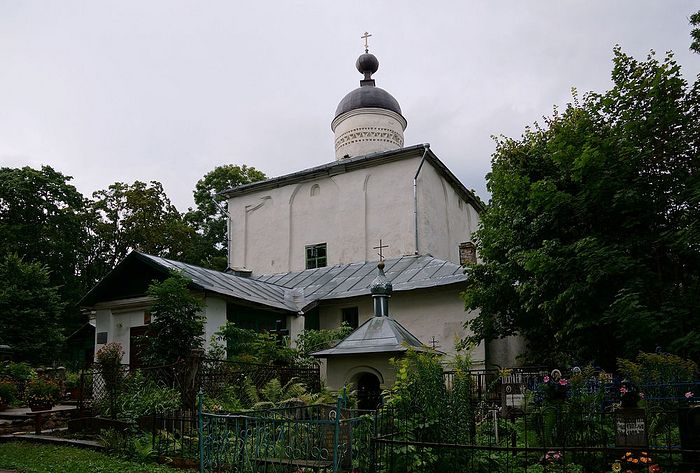 In Pskov, on the territory of the Myrrh Bearers cemetery there is a church that was assigned to the Cathedral church in 1955. The cathedral priests, among whom was Fr. John (Krestiankin), served only rarely in the cemetery church. There he came into conflict with the Pskov Architectural department. The essence of the conflict consisted in fact that in the Myrrh Bearers cemetery there were three priests buried, whose graves blocked the entrance to the chapel in which frescoes had been recently discovered. The restoration workers intended to move the priests’ graves, but Fr. John learned of it and forbade them to carry it out. Fr. John hired specialists to repair the fences around the graves and beautify the graves themselves, since they had been abandoned and were in poor condition. Meanwhile he went without delay to the local bishop and they both set out for the plenipotentiary. Here is what Lunin wrote about his visit from Vladyka John (Razumov) and Fr. John (Krestiankin):

They both—the bishop and priest Krestiankin—came to me, the latter in an anxious state, and started proving to me that architects were acting wrongly. I answered him calmly that he shouldn’t have bothered the bishop over such a trifle, that he should have come directly to me, and the matter would have been settled. The request was granted, but to make sure, he visited the cemetery every day and watched that the architects and restoration workers did not touch the graves of his brother priests. His fame as an instructor and preacher is is growing with each day among the faithful.4

And the author of these annotations, who personally remembers Archimandrite John from time the elder was over seventy years old, can only confirm that Batiushka remained just as sincere and full of burning zeal to the end of his days.

1 Statutes 58, 58.1.a, and 58.2-4 of the Criminal Code of the Russian USSR covered the so-called “counter-revolutionary activity”. These were the statutes most often used to imprison Christians. Prisoners sentenced according to these statutes were called “political prisoners” as opposed to common criminals.

2 This means that Fr. John remained in the altar to assist, not to actual serve the Liturgy. “I have seen a holy man.” On the Repose Day of Archimandrite John (Krestiankin)
Olga Rozhneva
The priest’s whole life turned around after meeting the elder. Fr. Savvatty came up to him and felt that he had no words, nothing to ask. He wanted just to stand next to him and feel the love radiating from this man. It was like a heavenly force coming from his soul. Fr. John poured out this heavenly love over everyone around him, and at first he couldn’t understand: How could Fr. John love everyone? Go, and Do Thou Likewise: On the Good Samaritan
Archimandrite John (Krestiankin)

Go, and Do Thou Likewise: On the Good Samaritan
Archimandrite John (Krestiankin)
The Lord gave us a commandment: do not unto others as you would not have them do unto you. This commandment is also always with us, always before us, like a vigilant and impartial watchman who exposes and unmasks both our knowledge and our cunning. May God Give You Wisdom! The Letters of Fr. John Krestiankin. Letters to Clergymen,To Those Desiring the Priestly Rank, and to Priests’ Wives. Part 2
Archimandrite John (Krestiankin)

May God Give You Wisdom! The Letters of Fr. John Krestiankin. Letters to Clergymen,To Those Desiring the Priestly Rank, and to Priests’ Wives. Part 2
God’s strength is made perfect in weakness; I have seen this in actuality all my life, and we are only strong in God’s strength. As Holy Hierarch Benjamim of Petrograd said on the threshold of death, we need to abandon learnedness and mind, and arm ourselves with faith. We need faith!
Comments
×