“The authorities are trying to destroy Orthodoxy in Greece”—Met. Ambrose of Kalavryta 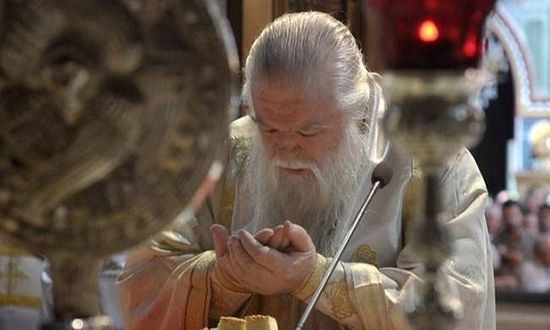 Metropolitan Ambrose of Kalavryta has published an open letter on his blog in which he decries the Greek ruling authorities’ animosity towards and attempts to destroy Orthodoxy.

“While we are silent as fish,” he begins, echoing the Akathist to the Theotokos, “everything is vanishing and dying. We are persecuting Christ! The Greeks are being de-Christianized!” the bishop exclaims.

According to the metropolitan, “the people from the ruling SYRIZA party are aiming to overthrow all that is sacred, Christian, and national. They are seeking to uproot the Orthodox and national self-consciousness of the Greeks.” He also stressed that “Day by day, Greece is gradually changing its face and character.”

The participation of the so-called “conservative forces” in the destruction of Greek foundations bears witness to this pursuit. The leader of the largest opposition party “New Democracy” Kyriakos Mitsotakis gave a reception for representatives of the LGBT community in his office, and the party itself was officially represented at the most recent gay pride parade in Thessaloniki.

“The voice of the Church is not heard today; the walls are falling one by one without resistance,” the metropolitan lamented. Under such conditions, hierarchs should not “be silent as fish,” but raise their voices in defense of the Orthodox identity of Greece, Met. Ambrose stressed.

The hierarch has continually spoken out about fidelity to the Orthodox faith and the fate of Greece under its secular government. Referring to the ongoing issue of religious education, in October 2016 he wrote, “It’s obvious that the government is sneering at the Church! They have cynically deceived us! We must understand that for the government the question of religious education is closed: It’s turning into a non-confessional subject where our Savior Christ is equated with Buddha and Mohammed.”

Emphasizing an active resistance, he exclaimed, “I call you to battle for our faith! We will remember the Minister of Education’s words, promising to ‘put an end’ to religious education in the course of the year. Can we really allow this crime to be committed? Now above all—a battle!”

In January of this year, he wrote an open letter to Greek prime minister Alexis Tsipras, in which he writes that he was disappointed to find that Tsipras had “set himself the goal of destroying the Greek Orthodox Church,” and accuses the government of deliberately leading Greece to catastrophe through destroying its economy, cultural heritage, history, traditions, and Orthodox faith.

The metropolitan has also been outspoken against the outcome of 2016’s Crete Council, and especially of the document “Relations of the Orthodox Church With the Rest of the Christian World,” which many have deemed to be ecumenistic. Belittling of family institution, abortion, and relativism place Greece on brink of demographic catastrophe—Metropolitan Ignatius of Demetrias
Demographic studies predict that the population of Greece will decrease by 500,000-1,000,000 over the next twenty years, according to the report of one Greek hierarch at a recent conference in Athens.

Greek hierarchs’ protest grows against anti-Christian sex education
Protest and unrest is growing in Greece against new directives coming down from the Ministry of Education to “eradicate sexual prejudice” and “homophobia and transphobia” through a new leftist education program.
Comments

Nicholas Pantelopoulos7/26/2017 10:43 pm
The Church of Greece (CoG) became the official state propaganda tool of the State of Greece. By 1924, the CoG became paid public servants. Thus there is this resemblance to so-called "Sergianism". The "State Church" and the "State Religion" is a modern concept. Between 1924 and the overthrow of the Junta, the Greek State used the Church as its mouthpiece. Following the political changeover, the populist State did not need the Church, and has been nudging for separation, which the CoG has been resisting. There are complications. These Church-State relations was highly criticized and proved to be scandalous for the people of Greece. First, the calendar reform, necessary to reinforce State propaganda of the existence of the Nation State of Greece (to keep Annunciation and Independence Day together on March 25), created the first significant rift with the devout of Greece. Second, was a dubious cooperation the State right-wing agenda to crush the left, and remaining silent during the years of outward persecution of communist and socialist sympathizers. The island of Macronissos became Greece's Gulag for communist sympathizers, who died there under extreme conditions, with the CoG and its hierarchy completely silent. The Church of Greece has never recovered. Secularist agenda and westernization has alienated the Greek people. Today, we face a gap of almost 4 generations who are no longer versed in the most common sayings of the Gospel.

Syed Silas Spear7/26/2017 3:12 pm
There has never been an Orthodox Christian Country but Christian Communities as little islands of Orthodoxy in all jurisdictions.
Will the Son of Man find faith when He comes in His Kingdom?

Anthony7/25/2017 8:43 pm
My dear most wonderful your eminence. As you will no doubt be aware, God only sends nations leaders in accordance with the disposition of a nation. If Greece were holy and Orthodox, then she would produce holy Orthodox leaders. Therefore it is no good blaming Tsipras etc. Blame lies with the nation who have apostatised against God. Have you not read the prophecies of Patro Kosmas Aitolos:

"Things will come out of schools which your mind cannot imagine."

"The clergy will be the worst and most impious of all."