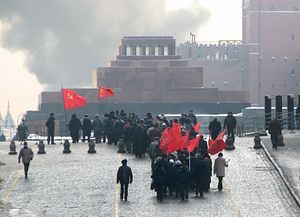 Communist Party supporters marching toward Lenin's mausoleum on Red Square
A senior Russian Orthodox priest has called Vladimir Lenin an "even bigger villain" than Adolf Hitler and backed an effort to check his works for extremism.

Archpriest Dmitry Smirnov, head of church relations with the armed forces and law enforcement, said in an interview that a closer study of Lenin's writings could drastically alter societal beliefs regarding the Bolshevik leader, who he described as an "unscrupulous and utter cynic and villain," Interfax reported.

Smirnov made his comments Friday in response to a question from Interview on whether he agreed with an effort by Russian Academy of Sciences researcher Vladimir Lavrov to have the Investigative Committee check Lenin's works for extremism.

Smirnov said he backed such an effort but that he doubted the works — which were a fixture on the bookshelves of many Soviet citizens and an obligatory subject of study in Soviet schools — would be banned.

He noted that Leninism, a communist ideology that promotes socialism and a "dictatorship of the proletariat," was also a kind of religion and that a check of Lenin's works would not affect how his staunch devotees viewed him.

Speaking about his belief that Russian cities needed to be rid of the ubiquitous images and place-names that include Lenin, Smirnov referred to efforts in post-World War II Germany to eliminate Hitler's name from public spaces.

For him, Smirnov said, Lenin was "an even bigger villain than Hitler" because "Hitler treated his people much better."