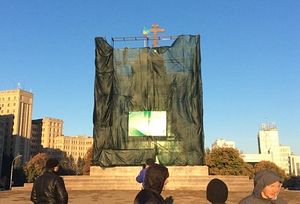 Activists of the Gromadska varta Kharkiv organization set up a four-meter wooden cross on the pedestal of the dismantled monument to Lenin at the Svoboda Square in Kharkov.

The cross stands together with the Ukrainian flag that was elevated above the pedestal right after the monument had been dismantled. The pedestal is surrounded with construction stages.

"We think that the cross is a symbol of freedom, symbol of unity. We want to stop discords in Ukraine with the power of the life-giving cross," activist Nelya Yarovenko said.

According to her, the cross was set up on Saturday at the dawn, and at 02:00 p.m. they planned to hold a prayer service there and consecrate the cross, but they had to put off the consecration as the priests whom activists addressed refused to do it, saying they were very busy.

As was reported, on September 28, radical activists dismantled the monument to Lenin in Kharkov. City mayor Gennady Kernes called these actions illegal and promised to restore the monument.

At night on October 2, the pedestal was surrounded with construction stages. Later, the press service of the Kharkov regional administration explained in was made to prevent possible clashes and provocations.