Miraculous appearance of icon of St. Nicholas in village of Velikoretskoye 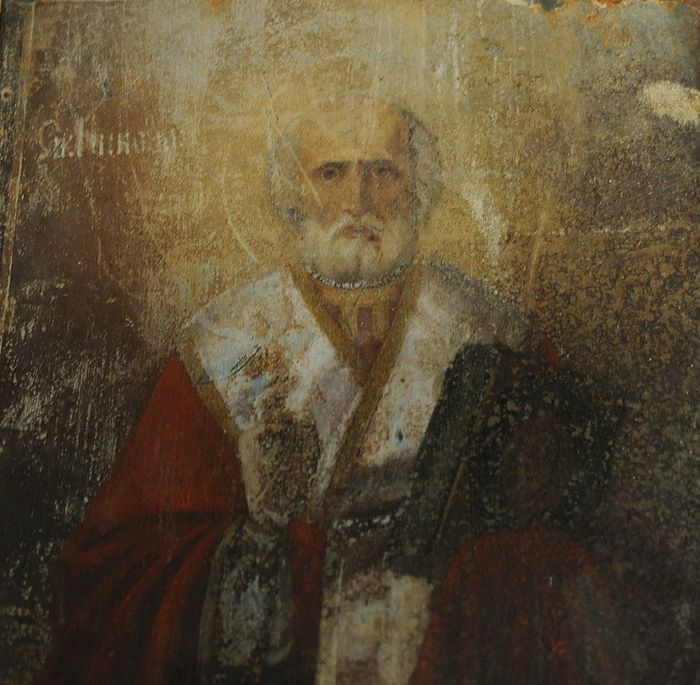 A miracle has occurred in the village of Velikoretskoye—an icon was found. An image of St. Nicholas has shone through on a piece of old roofing which was being used for household needs, reports GTRK-Vyatka.

It occurred at the Trifonov Monastery farmstead, where livestock are usually kept for the needs of the parish. Recently one of the novices, stopping by the barn, felt someone’s presence. Looking around, he found that on an old piece of metal covering up one of the outbuilding’s windows there was manifested an image of St. Nicholas the Wonderworker. 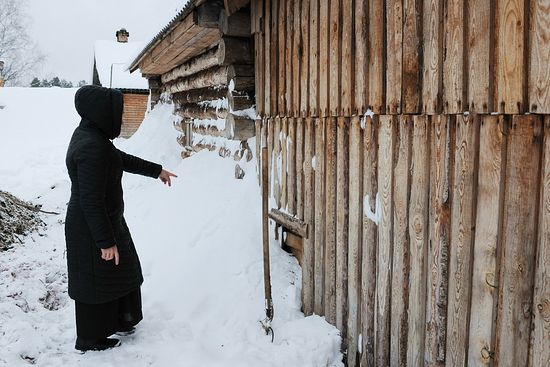 It is no accident, the clergy believe, that the icon appeared on the third day after the feast of St. Nicholas. On that day the first service in the renovated church in Velikoretskoye, named for the saint, took place. It is emblematic that this is the second such acquisition in the village’s long history.

Hieromonk Nikolai: “Of course, it is perhaps too early to search for any signs, but for some it is already a sign. But definitely one thing is clear, that such events come not from man… After all, nobody could propose such a thing… Imagine, in a barnyard, in a cowshed, suddenly… Such tokens, signs, reminds us that, as our Lord Jesus Christ said, above all we must seek the Kingdom of God, and the rest will be added unto you.”

The icon is now found in the Transfiguration church in the village of Velikoretskoye. It was placed in a wooden frame and now they are serving Molebens. The image, the clergy say, is on its own becoming clearer with every day. People from all over the region have come to see the miracle.

Ukhat resident Alexander Zhemirev found himself passing by Velikoretskoye coincidentally. Hearing about the miraculous finding of the holy image, he was glad to have wound up there at precisely that time.

“I was pleasantly surprised that this happened. I take this as God’s mercy which the Lord gives us sinners to strengthen our faith. Now we have New Year’s coming and people are beginning to think more about food and things like that, and here the Lord shows us that not everything is confined to the New Year’s meal—there is still fasting and prayer,” said Zhemirev. 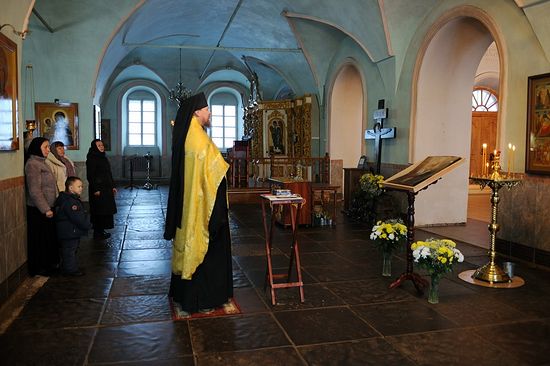 They have begun to serve Molebens before the icon of St. Nicholas the Wonderworker.

Note that in 1383, on the banks of the Great River, an image of St. Nicholas appeared to the peasant Agalakov. Soon healings and miracles were coming from the icon. Word of the icon’s miraculous appearance quickly spread around and people traveled to the place of the icon’s appearance, thanking God for granting them this holy image, and receiving spiritual consolation and healing. Together the peasants built a chapel on the place of the icon’s appearance and later began the construction of a church—a more suitable place for the miraculous image. In 1392 the icon was carried from the banks of the Great River to the city of Khlynov (as the center of the Vyatka region was known from that time until 1780). Residents of Khlynov vowed to bring the icon to the place of its appearance annually. So was born one of the longest-standing traditions of the Vyatka lands—the Velikoretsky (Great River) Cross procession. Icon of St. Nilus the Myrrhgusher Gushes Myrrh in his Native Village

Icon of St. Nilus the Myrrhgusher Gushes Myrrh in his Native Village
During the procession, both the clergy and laity became witnesses for yet another year of the great miracle of myrrh streaming from his holy icon, which is an event that usually takes place during the course of the procession every year. "Five Blessed Days with The Kursk Root Icon:" Protectress of Russian Diaspora visits U.S. Capital
Archpriest Victor Potapov
The miraculous Kursk Root Icon of the Mother of God visited several parishes and many of the faithful over the Thanksgiving weekend in Washington, D.C.
Comments

Adellesigmund1/26/2017 11:36 am
I have thoroughly enjoyed reading your article. This post provides more useful information to me.I really like the information you offer in your articles..I am thankful to you for sharing this useful article.
Visit: http://www.essayscouncil.com
×