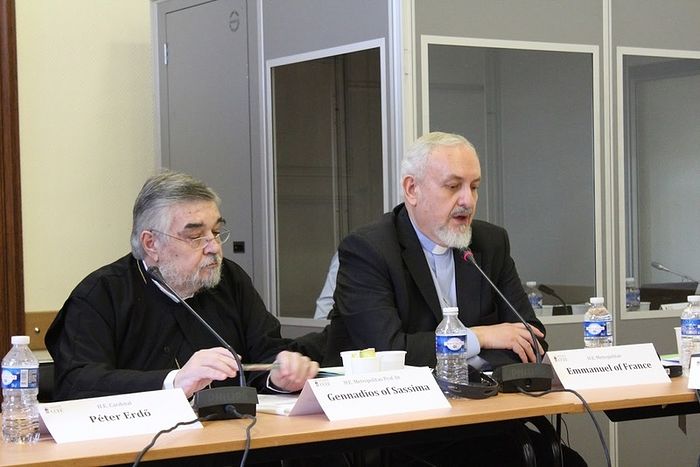 As previously reported, the press service of the nationalistic and schismatic “Kiev Patriarchate” reported on its website that it sent a delegation to the Phanar to meet with representatives of the Ecumenical Patriarchate, including Met. Emmanuel (Adamakis) of France, on January 12, supposedly discussing the recent Crete Council and the question of autocephaly for a Ukrainian Church. This claim, writes the Union of Orthodox Journalists, is now being called into question.

According to media reports, including the Greek source Amen.gr, Met. Emmanuel was in fact participating in the Fifth European Orthodox-Catholic Forum which was held in Paris from January 5 to 12, which is confirmed by photos of the event, where he is seen seated next to Met. Gennady of Sassima. Presumably he was in Paris through the end of the forum, and thus not in Constantinople on January 12. A schismatic from “the Kyiv Patriarchate” started serving in an Orthodox church of North Cyprus
Services, or, to be more exact, theatrical performances by this pseudo-priest are intended to attract the Russian-speaking tourists and to demonstrate the religious tolerance of the Turkish authorities in the northern part of Cyprus. But this “tolerance” is a lie.
Comments

Whats next, an "Isreali Orthodox Church", a "Kosovoan Orthodox Church"? For goodness sake why won't the Church stop acting as if occupations by a foreign power are legitimate nations in the eyes of God?!!
×