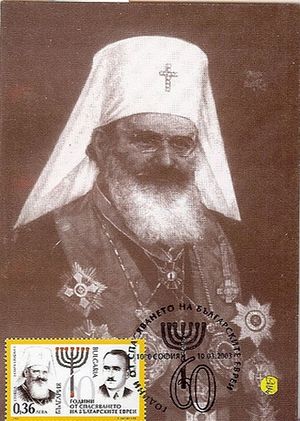 Bulgarian bishop Stefan, saver of Jews. Dimitar Peshev on right and Bishop Stefan on left. Photo: www.flickr.com
From 1943 to 1945 around 48,000 Jews living in Bulgaria were rescued from the grips of the Nazi terror, thanks in part to Bulgarian Parliament's Deputy Speaker Dimitar Peshev, Metropolitan Stefan, Exarch of the Bulgarian Church, Metropolitan Paisy of Vratsa, and Metropolitan Kirill of Plovdiv (later to become patriarch), who convinced then-tsar Boris III to defend his Jewish population. The Holocaust trains arrived on March 10, 1943, but the planned deportation never took place. Since 2003, March 10 is known in Bulgaria as the “Day of the Salvation of the Bulgarian Jews.”

Now the Bulgarian Orthodox Church has been nominated for a second time for the Nobel Peace Prize.

As the Bulgarian Patriarchate’s site reports, the nomination was officially submitted to the Nobel Committee in early January at the initiative of the former Israeli Minister of Health and Deputy General Dr. Ephraim Snekh, Haifa University law professor Moshe Keshet, and attorney Moshe Aloni, boasting the signatures of over 200 surviving Bulgarian Jews who had been rescued.

Many individuals risked their own lives to heroically save Jews from death and persecution during the Second World War, but the Bulgarian Orthodox Church was the only religious institution in territories under Nazi control to officially declare a position in support of the Jewish population. The Church’s consistent position, based on the perfect love which casts out all fear and lays down its life for another, inspired the Bulgarian public to resist the implementation of laws discriminatory against their Jewish neighbors.

The Bulgarian Orthodox Church had previously been nominated in 2013 on the seventieth anniversary of the rescue of the Bulgarian Jews, then submitted by Lachezar Toshev, Deputy Head of the Permanent Delegation of the National Assembly in Parliamentary Assembly of the Council of Europe, who said at the time: “This act of the Bulgarian Orthodox Church set a global precedent and is worthy of distinction, inasmuch as the Church thereby risked its own future to protect those of another faith.”

The winner of this year’s Nobel Peace Prize will be announced in October. Bulgarian Jews in Israel Seek Submission of Orthodox Church as Nobel Prize Candidate
The Bulgarian Orthodox Church had already been nominated to receive the Nobel Peace Prize in 2013 for its efforts during World War II to save Jews from deportation to Nazi concentration camps.
Comments

Shteryu3/14/2017 1:57 am
It was the spiritual Teacher Petar Danov, who convinced King Boris ІІІ to rescue the Bulgarian Jews (not the Bulgarian Orthodox leaders, nor Dimitar Peshev, although they had voiced support for the Jews)

Robert Sanfilippo1/25/2017 6:47 pm
"the Bulgarian Orthodox Church was the only religious institution in territories under Nazi control to officially declare a position in support of the Jewish population."

Didn't the Greek Church do the same?
×