In Memory of Archbishop Simon (Vinogradov) of Peking and China 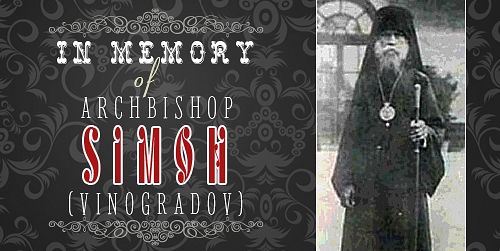 Next year will be the 85th anniversary1 of the repose of the great teacher of piety and chastity of the Far East, His Eminence Archbishop Simon of Peking and China, Chief of the Russian Ecclesiastical Mission in Peking.

The first bishop appointed to head the Peking Mission was St. Innokenty of Pereyaslavl, later of Irkutsk, revered in Siberia as a miracle-worker, who never actually arrived in Peking, for the decree addressed to the Chinese government the missionary was carelessly named “Grand Lord,” which was the title of the Chinese Emperor. For this reason, the bishop of Christ was not allowed within the borders of China. Before the Boxer Rebellion of 1900, when the Mission was destroyed by rebels, the Russian Ecclesiastical Mission was headed by archimandrites. In 1902, Archimandrite Innokenty (Figurovsky) was elevated to the rank of bishop to the diocese of Pereyaslavl, in honor of the first bishop selected to head the Peking Mission. In 1918, the mission was renamed the Diocese of Peking and China. Metropolitan Innokenty’s successor was Bishop Simon (Vinogradov).

Bishop Simon, born Sergei, came from a family of clerics. From his youth he harbored love for a life of solitude, asceticism, and service to the Holy Church. Graduating from Vladimir Seminary, he joined the Kazan Theological Academy. Its rector at the time was Bishop Anthony (Khrapovitsky), future founder of the Russian Orthodox Church Outside of Russia and its first Primate.

This is what Metropolitan Anthony wrote in his memoirs on the missionary hierarch: 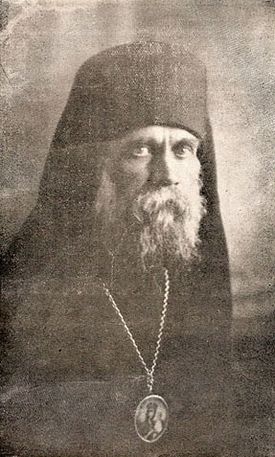 “His Eminence Archbishop Simon was known to me as a student in Kazan Academy, where he studied from 1898 to 1902. His friends all loved him for his humility and meekness, a character he preserved until his death. He was reared from childhood in the pious family of his father, the senior priest of the cathedral in Vladimir, Protopriest Vinogradov. Vladyka Simon, with his soft manner, served in the harsh foreign circumstances, and died at 58, his life cut short through hard labors in studying the Chinese language and in preaching the faith in Christ; he learned the tongue fairly quickly, but quicker to come were the respect and love he garnered from both Russians and local Chinese population. I feel it my duty to declare that I could never get used to the thought of His Grace Simon as an older man, for thanks to his crystal-pure soul I saw him until the very end as a young monk and student. When he was a hierodeacon, his Academy friends called him “mama”, to emphasize his caring, kind attitude towards them all” (from Polnoje sobranije sochinenii Blazhennejshego mitropolita Kievskogo I Galitskogo Antonija [The Complete Works of His Beatitude Metropolitan Anthony of Kiev and Galicia]).

As an academy student, Sergei was tonsured a monk with the name Simon, and that year, on the feast day of the Translation of the Relics of St Nicholas, he was ordained to the hierodeaconate. In 1901, he was ordained a hieromonk. Graduating from the Academy in 1902 with a degree in theology, Hieromonk Simon was appointed member of the Russian Ecclesiastical Mission in Peking. On the feast day of the Dormition of the Mother of God in 1907, Fr Simon was elevated to the rank of archimandrite. In 1922, by the laying of episcopal hands, he was consecrated Bishop of Shanghai, Vicar of the Peking Diocese. So donning the Gospel yoke, the new Bishop Simon embarks on his episcopal labors in the harvest-fields of God. His Grace possessed the qualities of kind condescension to his neighbors, zeal for asceticism; granted the gift of word, he was able to ignite the hearts of his flock with news of the light of Christ’s truth.

In the summer of 1931, Metropolitan Innokenty reposed in the Lord. The Synod of Bishops of the Russian Orthodox Church Outside of Russia appointed Bishop Simon to replace him and elevated him to the rank of archbishop. The missionary archpastor continued to attract people with his pious life, fulfilling the words of David: “I will reprove thee, and set them in order before thine eyes.”

In February, 1933, in Shanghai, Bishop Simon died of pneumonia. News of his death evoked profound sadness and tears among his fellow archpastors, flock and all his friends. The body of the hierarch was buried in a crypt of the Church of All Martyrs, next to Metropolitan Innokenty and the many martyrs of the Boxer Rebellion. In 1940, when his coffin was moved, it was noticed that his body had not suffered despoilment.

Eternal memory to this bright lantern, and may the Lord grant us to “behold him in the grace of God among the righteous, in the place of light and of verdure” (St Dimitry of Rostov).

1 In the original article, the 60th.
See also China sees first Orthodox priest in sixty years
"Because we are of the correct faith, Eastern Orthodoxy will take root in China and will develop," Fr. Shi predicted. The Astonishing Popularity of Christian Faith in Today's China
Martin Conway
For those of us privileged to have some firsthand awareness of the situation and struggles of Christians in today’s People’s Republic of China, the way Christian faith has won the hearts of millions of people in a land so often considered by earlier missionary strategists to be one of the most difficult in the world, is nothing less than a revelation of the power and truth of God’s Holy Spirit.
Comments
×