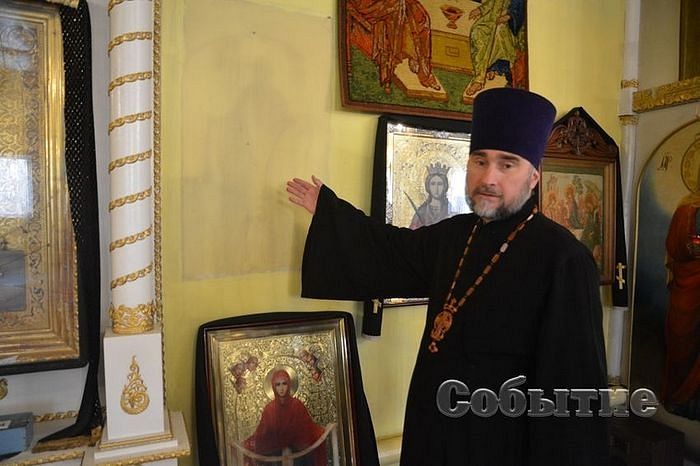 An image of the Mother of God has appeared on a wall inside the Ukrainian Orthodox church of the Right-Believing Grand Prince Igor of Chernigov and Kiev in Kamensk, Ukraine.

The image was discovered during the parish’ feast day and was nearly washed off by a woman helping with the annual cleaning and refreshing of the paint on the walls, reports sobitie.com.ua.

Local resident Vitaly Nikolaevich was also helping with the yearly work and it was he who removed the icon of the Theotokos, revealing the shadowy image on the wall behind it. For him, it is nothing short of a miracle: “I want as many people as possible to find out about what happened, because it’s a real miracle,” he said.

“We know of such cases taking placing in Ukraine. For example, in the Kiev Monastery an image imprinted itself on glass, and here it happened on the wall. It’s difficult to explain what happened. For the most part, we live worldly, vain lives. People have faith in miracles and signs for the strengthening of their faith,” parish rector Fr. Igor Didovets explained. “Therefore the Lord sends us such signs for us to see and be strengthened in our faith,” he continued.

“The image of the Most Holy Theotokos is very important for Ukrainians, as the patroness of the Cossacks and the Ukrainian army. We have her icon in many homes. By her appearance the Mother of God shows us that she prays for us and protects us with her veil. The Lord gives such signs for a man to contemplate his life,” Fr. Igor stated.

It’s noteworthy that the place where the image of the Mother of God is imprinted is not under direct sunlight, the icon over the spot is not opaque, and is backed by thick plywood, which itself has no tracing at all.

Parishioners are joyous but cautious, waiting for their bishop to assess the manifestation. Priest given $51,000 for church debt after praying before icon

Priest given $51,000 for church debt after praying before icon
His priest friend had told him of a difficult situation he had found himself in a few years prior, and that, after an hour of prayer before the icon, a stranger came and offered him precisely the amount of money he needed.

raia6/19/2017 6:15 pm
thank you God, we can see this miracle and know that Bogorodica will save us and we are be safe and we should pray, pray pray. Lets believe in God and pray.

kozak3/6/2017 4:42 pm
She is probably trying to stop the Ukrainian army which is unter the nazi governmentcontrol at the moment from killing the Donbass people...
×