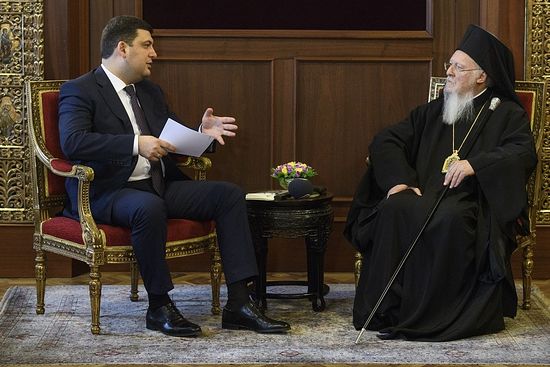 “We pray that the Ukrainian people would be united in one Church. The Mother Church of Constantinople will help you find such a united Church,” His All-Holiness Ecumenical Patriarch Bartholomew told Ukrainian Prime Minister Volodymyr Groysman during a meeting in the offices of the patriarchate in Constantinople on March 15.

The Prime Minister was accompanied by Metropolitan Emanuel of France, Metropolitan Bartholomew of Smyrna, and Archbishop Daniel of the Ukrainian Orthodox Church of the USA, reports the site of the Church in the USA.

Ukrainian politicians and non-canonical schismatic “Orthodox” clergy have appealed to the Ecumenical Patriarchate many times to involve himself in the canonical territory of the Moscow Patriarchate and declare the Ukrainian Church autocephalous, which he has thus far declined to do.

“We attribute great importance to our cooperation. Ukrainians aspire to a single Church, and your role is very important,” the prime minister said. “We have deep respect for Your Holiness and for your support in efforts leading to a unified Ukrainian Orthodoxy.”

His All-Holiness responded with thanks for the Ukrainians fidelity to the Church and expressed his willingness to help the Ukrainians achieve a united Church. “We can be optimistic about the future,” he added.

“I want to express our gratitude for the wisdom, blessings and love to Ukraine, for caring about Ukraine and for the prayers by which you support us in this difficult time.” Groysman said. In turn, Patriarch Bartholomew addressed himself to the Ukrainian people, whom he styled his spiritual children: “We greet the entire beloved Ukrainian nation from the headquarters of the Ecumenical Patriarchate not as foreigners but as beloved spiritual children of the Mother Church. Spiritual relations that unite the Mother church with Ukrainians never disappeared. We are close to you, especially when it is hard, we accompany you with our prayers and blessings… We send our blessing, love and concern for every Ukrainian without exceptions.”

Paok5/24/2018 8:06 pm
Roman, actually their is a civil war in Ukraine, and not all Ukrainians support your false narrative authored by the west and its cronies, who have their own reason for wanting to see a divided Ukraine. Today there are hundreds of thousands of people fighting against the Saudi's in Yemen, but their "blood shed in defense" of their country and their freedom means nothing to the hypocritical mind of those blinded by hate and love of power, I.E. your western leaders! If you can not see the hypocrisy and double standard then you too are blind. Ukraine has always been part of Russia, since the time of Prince Vladimir, but "divide and conquer" rules the spirt of the western world.Remember Kosovo?

Roman3/17/2017 8:21 pm
I thought this was a religious news page. Why do you publish such chauvinistic comments as the one made by T.D.? If 45,000,000 people state they are a nation and back this up with their own blood shed in defense of this statement, who is T.D. to claim otherwise? And who are you to support this absurd claim?

Anthony3/16/2017 11:15 pm
The Phanar is well and truly off his trolley. No wonder he's a CIA employee. There is one Church in the non-country otherwise known as ''Ukraine'' and that's the Ukrainian Orthodox Church - MP. The rest are all heresies. If they wish to repent and rejoin our Mother the Church, all fine and dandy, if not they will give an answer, well who made us their judge. They will give an answer.