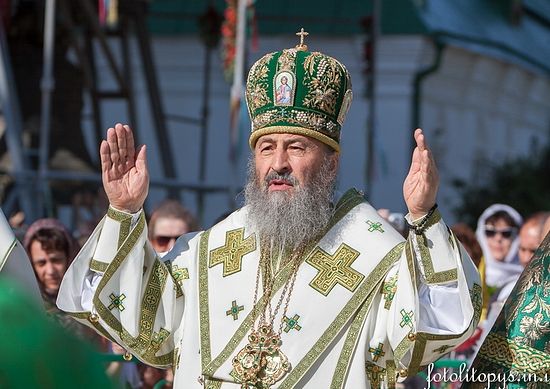 As previously reported, the schismatic “Patriarch” Philaret Denisenko of the so-called “Kievan Patriarchate” went before the Ukrainian parliament at a ceremonial meeting in honor of the centenary of the 1917-1921 Ukrainian revolution and called the clergy and faithful of the canonical Ukrainian Orthodox Church “fools” for remaining canonical within the Moscow Patriarchate.

Not only did he insult the Orthodox Church, but he slandered its primate His Beatitude Metropolitan Onuphry, considered by many a bulwark of Orthodox spirituality.

According to the phony patriarch, Metropolitan Onuphry refused to honor those whom President Poroshenko awarded as Heroes of Ukraine, declining to stand up for them and saying, “We cannot respect killers.” In his view, this means His Beatitude is unworthy to serve the Ukrainian state. “Patriarch” Philaret thus pandered to his base, built on nationalism and a disdain for Russia.

The Information-Education Department of the Ukrainian Orthodox Church has repudiated this accusation today, saying, “It is impossible to find the source that this was quoted from, because it never belonged to His Beatitude Metropolitan Onuphry.”

Furthermore, the topic of celebrating Ukrainian heroes was never broached between Philaret and His Beatitude Metropolitan Onuphry, so he certainly did not hear such a statement in person. Additionally, the metropolitan has often visited frontline regions to support Ukrainian soldiers and the civilian population and himself celebrated the funeral service over departed Ukrainian heroes, unlike “Patriarch” Philaret. Metropolitan Onuphry is a man of very strong prayer