Christ’s Conversation with the Sadducees

From the book of sermons and conversations with Serbian Patriarch Pavle Walk to Eternity: Selected Sermons and Interviews published by Sretensky Monastery.

The same day came to him the Sadducees, which say that there is no resurrection, and asked him, Saying, Master, Moses said, If a man die, having no children, his brother shall marry his wife, and raise up seed unto his brother. Now there were with us seven brethren: and the first, when he had married a wife, deceased, and, having no issue, left his wife unto his brother: Likewise the second also, and the third, unto the seventh. And last of all the woman died also. Therefore in the resurrection whose wife shall she be of the seven? for they all had her. Jesus answered and said unto them, Ye do err, not knowing the scriptures, nor the power of God. For in the resurrection they neither marry, nor are given in marriage, but are as the angels of God in heaven. But as touching the resurrection of the dead, have ye not read that which was spoken unto you by God, saying, I am the God of Abraham, and the God of Isaac, and the God of Jacob? God is not the God of the dead, but of the living. And when the multitude heard this, they were astonished at his doctrine (Mt. 22:23-33). 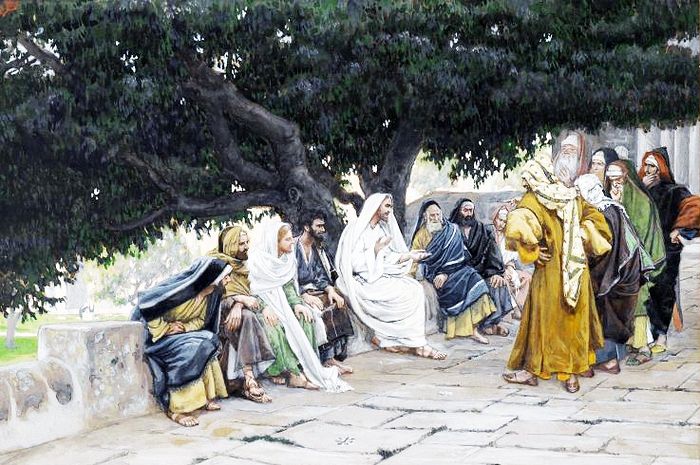 The Sadducees were rationalists; that is, they relied only on their minds, not understanding that in Holy Scripture God has opened to us as much as we can understand and as much as we need for salvation—that is, truth which exceeds the capacity of our limited minds. Desiring to humiliate Christ and to show the people His “error,” they invented this story, based on the Mosaic Law, where it says that if a man was married and died without children, then his brother was required to marry his widow, and the children from this marriage would be recorded in the name of the departed brother. They did this so that the family of the deceased would not come to an end and that his descendants would also participate in the Messiah’s glory when He would come. From the Sadducees’ story, it is clear after the first and second marriages that the woman could not have children—it was pointless to give her in marriage to each successive brother. But the Sadducees thought of it. The Mosaic Law said that one man was able to have several wives. In fact, it was that way then because many men died in war, but the women remained, and what would become of these women? But that’s another matter. Through Moses God revealed the judgment that a man could have several wives. But for one woman to have several husbands could not be. It is understandable, because if a woman had several husbands, then it would be impossible to know who was the father of her child—this or that husband. Christ says that they (the Sadducees) know neither the Holy Scriptures, nor the power of God, because in the resurrection they will neither marry nor be given in marriage.

Birth and marriage are connected with this world. In that world people will neither marry nor be given in marriage, but will be as the angels. That is, a husband will know his wife, and a wife her husband, and of course, children their parents, but a husband will not know his wife according to earthly appetites, but according to love, which united them in this world. The Sadducees didn’t believe in angels. But Christ, speaking with them, spoke about angels even though they hadn’t asked Him about them. Remember when Moses, having escaped from Egypt, was tending his father-in-law’s flock, he saw a bush which was burning but not consumed, and he drew near to see what it was. And the Lord spoke to him from the fire and said, Put off thy shoes from off thy feet, for the place whereon thou standest is holy ground. Moreover he said, I am the God of thy father, the God of Abraham, the God of Isaac, and the God of Jacob (Ex. 3:5-6). In this way, God comforted Moses: the Jewish people would not die in Egyptian slavery. They would burn, as in a fire, but not be consumed. And another wonder of the burning bush is that it was a symbol and sign of the Holy Theotokos, who received and gave birth to the Son of God. She is the bush that was not consumed by the fire of God. Trials and Crucifixion of Christ, Part 2b. The Traps.
Dr. Jeannie Constantinou

Trials and Crucifixion of Christ, Part 2b. The Traps
Dr. Jeannie Constantinou
Monday evening contains the questions asked by the Pharisees, Sadducees and Scribes to trick or to humiliate Christ. Заголовок: Getting to the Point
Fr. Stephen Freeman

Getting to the Point
Fr. Stephen Freeman
The English vocabulary exceeds 200,000 words. Thus, it is interesting when English doesn’t quite have a word for something. This is the case with the language of worship.