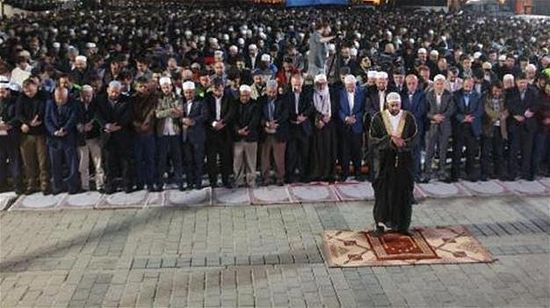 A large crowd gathered outside Agia Sophia in Constantinople in the morning hours of May 13 to demand its re-conversion into a mosque, reports Hurriyet Daily News. May 29 marks 564 years since the famous church was converted into a mosque in 1453 by the Ottomans who had recently overtaken the city.

The group, organized by the Anatolia Youth Association (AGD), gathered at around 4:00 AM on the street in front of the Agia Sophia to read their morning prayers, and to demand with the motto “Break the chains, open the Agia Sophia,” that the museum be turned once again into a mosque. The AGD takes as its mission the words of the late Islamist leader Necmettin Erbakan, “Life is faith and jihad.” They staunchly stand against anything non-Muslim in Turkish society.

The ruling Justice and Development Party has been talking of turning the museum into an active mosque again since 2013. Turkish president Recep Tayyip Erdoğan , who has referred to the time of the Christian Byzantine Empire as “a dark chapter” in history, publicly announced that he would read Muslims prayers in Agia Sophia on Holy Friday this year. He also claimed that Kemal Ataturk’s order to transform Agia Sophia from a mosque into a museum is a fake.

Although the president did not read the prayers in the end, the movement for making Agia Sophia a mosque once again continues to gain momentum, as seen with the group prayer used as a demonstration on May 13.

The crowd dispersed after finishing their prayers. Anthony5/16/2017 7:58 am
Well they have their intentions, and God has His. Based on the prophecies of St Kosmas, St Paisios and Geronda Efraim we'll see whose will prevails -That of the godless or God's. As St Paisios quipped: '' . !''

He who has ears to hear, let him hear!
×