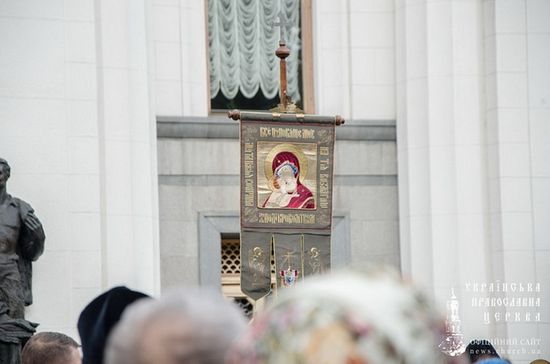 The bills, which will be considered on the parliamentary floor on the same day, have caused great concern throughout the country and beyond. Bill No. 4511 proposes that churches that have their administrative center in so-called “aggressor states” can appoint bishops only with the consent of governmental authorities, and that any confession cooperating with “aggressor states” can be forbidden. Bill No. 4128 legalizes the seizure of churches, which has already been happening against the Ukrainian Orthodox Church under the Moscow Patriarchate.

Petitions have been drafted in all regions of Ukraine, with thousands of signatures being collected, calling on the Verkhovna Rada to reject the bills which threaten the faith of the majority of Ukrainian citizens.

Ukrainian hierarchs have been raising their voices against the proposed measures as well. In an appeal posted on his diocesan website, Bishop Nathanael of Volhynia and Lutsk appealed to his flock to approach the situation with the Christian virtues of love and faith. “It is hard to believe, but today, in the democratic Ukrainian society, which declares its desire to embody European values and freedoms, a new persecution is unfolding, against the Ukrainian Orthodox Church—the rightful successor to the ancient Kievan metropolitanate,” the prelate writes.

“I appeal to all the faithful of Volynia, who value peace and do not desire new conflicts in the state, to stand against hatred with prayer, love, and faith… We, who are the ‘light of the world,’ must first of all convey to the public the truth that the Church is not a political institution, but the Body of Christ. Today, the future of Orthodoxy is in our hands,” the archbishop stressed.

“The clergy and laity are trying to get the people’s representatives to hear the opinion of the religious part of society and to prevent the legalization of discrimination on religious grounds in Ukraine. The believing citizens of Ukraine are convinced that the anti-Church decisions of the deputies, aimed at discriminating against the Ukrainian Orthodox Church and the escalation of religious conflicts, is not just a personal moral choice of the deputies, for which they will answer at the Dread Judgment, but it invokes the wrath of God on the country, which they have been entrusted to lead,” the Ukrainian Church’s site reads.

Ukrainians do not support creation of “one Local Church”
The attempts of the current Ukrainian authorities to create a single Local Ukrainian Orthodox Church do not find support from the overall population which believes that the “rhetoric of hatred” towards the Ukrainian Orthodox Church of the Moscow Patriarchate can become “a factor of destabilization in the social-political situation.”