First Russian church in honor of St. Paisios to be built in Crimea 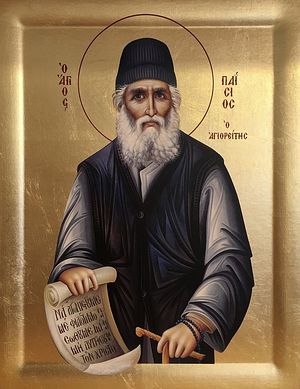 “With the blessing of Metropolitan Lazar of Simferopol and Crimea, the community of the future church in the village of Muromskoe in the Belogorsk region of Crimea has already been created,” Kirsanov reported.

The ceremony of consecrating the future church’s foundation stone will be celebrated on July 25, on St. Paisios’ birthday. Representatives of Russian and foreign clergy of the Russian Orthodox Church, Crimean authorities, Duma deputies, diplomats, and Russian, Greek and EU public figures are expected to participate in the event.

The site of the future church was not chosen randomly, Kirsanov said. The picturesque spot by the lake in Muromskoe was historically inhabited by Greeks. The new church of St. Paisios is also to become a podvoriye of a Greek monastery, and the church complex will include a baptismal church, a bell tower, and a pilgrimage center with a hotel.

While the Crimean temple will be the first built in honor of St. Paisios in Russia, an altar was consecrated to St. Paisios in March in the Church of the holy Equal-to-the-Apostles Vladimir in the northwestern Moscow district of Mitino.

The foundation stone of the first Belarusian church in honor of St. Paisios was blessed on October 2, 2016 in Slutsk in central Belarus, by Archpriest Nikolai Labynko, the secretary of the Slutsk Diocese. His Beatitude Patriarch John X of Antioch consecrated a parish dedicated to St. Paisios in Jaramana, Syria on February 3, 2017. Numerous churches throughout Greece and Cyprus have already been dedicated to the great twentieth-century ascetic.

St. Paisios was canonized on January 13, 2015 by the Holy Synod of the Ecumenical Patriarchate, and added to the calendar of the Russian Orthodox Church on May 5, 2015. Another Church in Greece Consecrated in Honor of St. Paisios of the Holy Mountain
In his homily Metropolitan Chrysostom spoke about Venerable Paisios’ life of righteous struggle, “having become a magnetic pole for thousands of people not only from Greece, but from all ends of the earth.” Greek servicemen are building a Church dedicated to St. Paisios the Athonite

Greek servicemen are building a Church dedicated to St. Paisios the Athonite
The foundation stone of the new church within a military unit was laid by His Eminence Metropolitan Ignatios of Larissa and commandant of the unit Konstantinos Kostopoulos.

Elder Paisios on Spiritual Study
An Excerpt from Spiritual Awakening
St. Paisios the Athonite
First, they should read the New Testament to learn the meaning of Christ, to be shaken up a little; later they can read the Old Testament. Do you know how hard it is when they have read nothing and yet they come to ask for help? It is like an elementary school child going to a university professor and saying, “Help me.”
Comments
×