Pod of dolphins brings icon of Theotokos to shore in Sochi 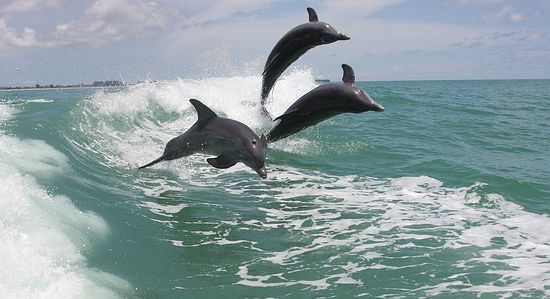 In a rather unusual occurrence, a pod of dolphins “returned” an icon of the Mother of God to people on the beach in Sochi, reports The Russian People’s Line, and Orthodox England.

A colonel and his wife, relaxing and enjoying the beach atmosphere on May 17, were witnesses to the event, their attention being drawn when a group of twelve dolphins swam all the way up to the beach itself. The bewildered couple wondered what the typically smart animals were doing on the beach, when suddenly they threw something out of the water, immediately swimming off. 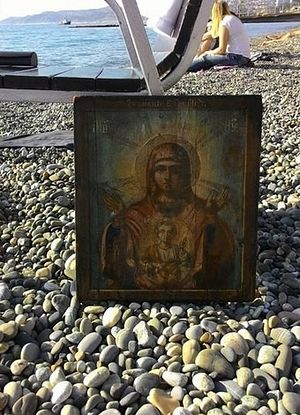 Photo: ruskline.ru
The object was covered in mud, and seemingly completely unimportant. Though other people were lounging on the beach as well, no one paid it much attention. Eventually the colonel’s wife asked her husband to go see what the object was, and, having cleared away the mud, the colonel was shocked to find that the dolphins had delivered an icon of the Theotokos, which they later realized was of the type “of the Sign.”

How the icon wound up on the ocean floor, and how the dolphins knew that it needed to be returned to shore, no one knows. Perhaps the dolphins recognized in the icon the grace of their Creator and of His Most Pure Mother.

The colonel then brought the icon to Moscow, with hopes of showing it to His Holiness Patriarch Kirill, and telling him the miraculous story of how it was “found.”

A similar event took place in 2013, when an 1896 icon of the Iveron Mother of God washed up on shore in Sochi, on the eve of its new calendar October 26 commemoration. An Icon of the Mother of God is streaming myrrh in a Turkish family in Paris
According to the Altindagoglus, the icon was given them in 2006 by a Greek monk from Libya. As soon as they received this icon they felt its great holiness and an unexplainable atmosphere of peace has reigned in their home since then.
Comments

nicholas sandy8/24/2017 1:26 am
Wonderful Miracles! 12 dolphins just like 12 Aposels. A wonderful GOD including people and Dolphins included in a miracle with two very old icons surviving at sea! Great to know God is still alive through all the Horrific things happening in our world and news today. I love to read such things because I have peace and see the light through all the darkness. Love is the answer and God, his son and his mother are the answer. People be loving to one another because the greatest of our commandments is loving thy neighbor.. and we all need Faith, love, and belief now of all times.. Beautiful Story..Blessed is he who has seen and believes... Blessed is he who hasn't seen and believes..

In 1648 Russian pilgrims who had visited Mt. Athos brought news of this wonder-working Icon to the then Patriarch Nikon of Moscow who commissioned an exact copy of it to be made and sent to Russia.

and almost immediately the icon was glorified with numerous miracles attributed to it by the faithful. It is still The newly restored Iveron Icon Chapel, outside of the Kremlin in Moscow's Red Squarecommemorated on that day as the feast of the Translation of the Iveron icon to Moscow. A Chapel was built in 1669 next to the Kremlin walls in Moscow to enshrine the icon. The Iveron chapel, as it was called, formed the main entrance to Red Square and, according to tradition, everyone, from the Tsar right down to the lowest peasant, before entering the square, used to stop at the icon to venerate it. Sadly, the chapel was destroyed by the Bolsheviks after the Revolution of 1917 and the fate of the icon is still unknown. Recently a new copy was made on Mt. Athos and placed in the newly restored Iveron Chapel by the gates of the Kremlin. Here on a daily basis Akathists to the Mother of God are served regularly throughout the day.

TIM MAHER6/17/2017 4:42 am
WHAT A SIGN, WHAT A GIFT AND MESSAGE FOROM OUR LADY TO SOCHI AND THEE RUSSIAN PEOPLE AND THE WHOLE WORLD.
AND THE MESSENGER THE 12 DOLPHINS.

Peter Kostoulakos6/15/2017 2:38 pm
This is an amazing story. I am wondering what condition the Icon is in considering it was in water. Egg Tempera is a very strong, durable paint, but where water and wood are enemies, I can't help wondering why it appears to be in such good condition.