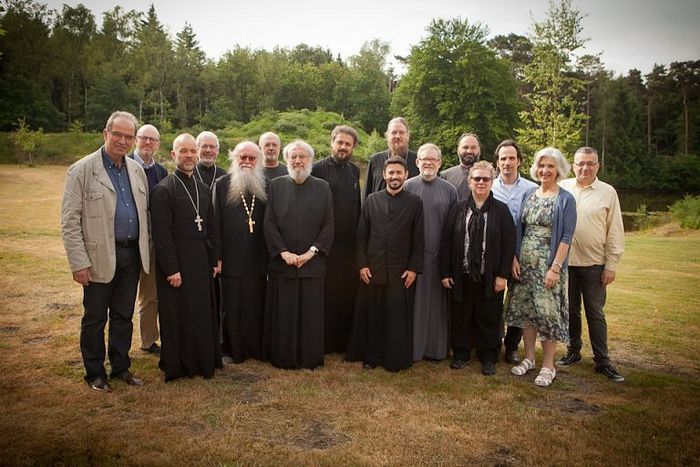 From June 7 to 9, an international group of Orthodox pastors and theologians gathered in Amsterdam to discuss matters of sexuality and pastoral care, reports the Amsterdam Centre for Orthodox Theology (ACOT) of the Vrije Universiteit Amsterdam, which hosted the event.

Participants reflected “on a wide range of matters concerning human sexuality as addressed by science and natural law, theological anthropology, legal issues, psychology, and pastoral care.” The event was reportedly conducted in a harmonious atmosphere, with those gathered discussing “how the Orthodox Churches might consider and respond to current pastoral questions while remaining faithful to Christ, the Gospel and Orthodox Christian Tradition.”

The event was unpublicized beforehand, although a statement will be forthcoming, according to participant Edith M. Humphrey, author of the A Lamp for Today blog.

Humphrey writes: “The group was not monolithic in views, and discussed many different aspects of pastoral care and sexual matters. It did not meet to strategize or to make plans for the Church, but simply was a group of academics and clergy whose writings or pastoral concerns have touched upon these topics.”

That the group would not be monolithic in views is evident from the list of participants (full list given below). One participant, Fr. Philip LeMasters, for instance, ably gave voice to an Orthodox conscience on troubling matters of modern “sexuality,” when he wrote in a homily, “It is not yet clear how far the agenda of deconstructing maleness and femaleness will go, but to make gender identity simply a matter of subjective self-definition should deeply trouble us all, and especially advocates of the rights and equality of women.”

However, concerns have been raised about several well-known participants who give voice to views outside the bounds of Holy Orthodoxy. The blog Monomakhos notes that attendee Aristotle Papanikolaou is the co-founder, along with George Demacopoulos, of Fordham University’s Orthodox Christian Studies Center, which publishes the blog Public Orthodoxy, which has proved to be quite controversial in its short existence. The blog recently hosted the article “Conjugal Friendship” by Giacomo Sanfilippo, a defrocked Orthodox priest and publicly-known practicing homosexual, in which the author attempts to justify homosexuality, stating that “Holy Tradition possesses in germinal form everything necessary to articulate, thoughtfully and cautiously, an Orthodox theology and spirituality of what we now call same-sex love, adequate to the pastoral needs of the 21st century and fully consistent with the ascetical ethos of Orthodox life for all.”

Public Orthodoxy has also recently published an article from Mark Arey, who gave up his Orthodox priesthood after 30 years and “married the love of his life,” as his biography states.

Another participant, Gayle Woloschak serves on the advisory board of the online journal The Wheel, which also includes Fr. Robert M. Arida, who argued in favor of homosexuality on the OCA’s Wonder blog, aimed especially at youth. The Brotherhood of the Orthodox Clergy Association of Houston and Southeast Texas released a statement responding to Arida, saying in part, “Fr. Robert Arida’s recent and past statements on the issue of homosexuality are a scandal to the faithful. They also present those who are sincerely struggling against homosexual temptations with additional temptations, and misdirection.”

The Wheel’s editorial board includes Gregory Tucker, a graduate of St. Vladimir’s Seminary and PhD student of Fordham University, who is involved in a homosexual “marriage” with a former hieromonk who gave up his priesthood and broke his monastic vows to live with Tucker. He has also contributed to Public Orthodoxy. Also on the board is Inga Leonova, an architect, writer, and educator, who is the founder of a pro-homosexuality group on Facebook, who has also contributed to Public Orthodoxy. Georgian Patriarchate asks to provide security to human rights activist from LGBT community
The statement says that, despite the fact that the Georgian Orthodox Church "condemns and considers this step (let alone the adoption of a law) to be unacceptable, violence and, naturally, manifestations of violence in its gravest form are also unacceptable."
Comments

Fr Joe8/23/2019 11:34 pm
I found most interesting that some of the greatest Orthodox theological minds weren't there. I found it quite telling that Davor Džalto for instance wasn't there, and he's by no means a conservative theologian. Actually, is on the "liberal" and even radical side when it comes to all sorts of issues. Even he couldn't take part in this business. That just shows to me how this whole thing is deviated and unorthodox. No theology or deep-thinking, just (aggressive) identity politics.

Constance Grace Burns6/30/2017 6:34 pm
So sad.I was baptized Greek Orthodox.I love the tradition, the iconography, the chant but I always wondered how a 2000 year old community will withstand the perversions in this or any culture,without getting hijacked by political parties and agendas.please dont force yet another schism by asking for a reformation.The last one didnt have the best of results.Or is that your agenda?To destroy the church as the American society has been and hand her to the devil?I believe the orthodox church,the left lung of Christ's church,needs to unify with Christ's and the church's right lung,the Catholic church as St pope John Paul II had said.Christ's body needs to unite in order to fight our common enemies

Editor6/15/2017 11:33 pm
Eleftherios: Just as we did not mention all of the writings of each conference participant cited, so we did not see any need to make a list of every work by Papanikolaou. If Public Orthodoxy's editorial policy is to mix an everything-goes, liberal philosophy together with Orthodoxy on one website, that is there prerogative. It is our prerogative to strive to present the Orthodox viewpoint, and not provide a platform for the LGBT lobby on the fringes of Orthodoxy. Forgive us if our viewpoint is distasteful to you.

Trigstar6/15/2017 7:19 pm
You might be interested to know that Archpriest Andrew Louth is giving a paper to a Conference in Oxford this coming Saturday, 17 June, entitled "Does the Orthodox Church need a Reformation"?

Eleftherios6/15/2017 5:19 pm
You forgot to mention Papanikolaou's other writings, such as on contemporary Orthodox theology, theological anthropology and especially those where he's critical of the Russian Orthodox Church, especially its recent document on human rights. And why don't you ever report on the unOrthodoxy of the Russian Orthodox Church, such as the Synod's decision to deny baptism to babies born of surrogate mothers, Patriarch's Kirill's use of "holy war" language, to name a few. If Orthodoxy is a living tradition of discernment, then all issues are open for discussion, except dogmatic issues. At least Public Orthodoxy strives for a balanced conversation, as it also published two essays on sexual purity by David and Mary Ford, as well as essays by Humphrey and LeMasters (you forgot to mention that). Your website would have more credibility if it strived for fairness rather than demonization.

J6/15/2017 7:29 am
Maybe the attendees aimed to gain their brothers back. Even if they are wrong and live sinful they are loved and every attempt should be made to help them repent. Don't you think?

Deacon Nicholas6/15/2017 4:10 am
Extremely troublesome that such discussion needs to happen. And the thin-edge-of-the-wedge issue for those who want homosexuality to be considered normal and normative is the issue of deaconesses.

Anthony6/14/2017 9:17 pm
And what better place to go and talk about sex than in Sodom and Gomorrah. Is the issue not already settled. What more do these people need to discuss. Not surprised Demacopoulos was there. He has spent a large amount time attacking Church Tradition, accusing Orthodox Christians who hold fast to Tradition and resolutely defend it as being fundamentalists. Ghastly man. Anyways, if these deviants want to talk to themselves. Let them. Don't oblige them.

Menas 6/14/2017 7:54 pm
As someone who converted to Orthodoxy from Roman Catholicism, this stinks to high heavens
×