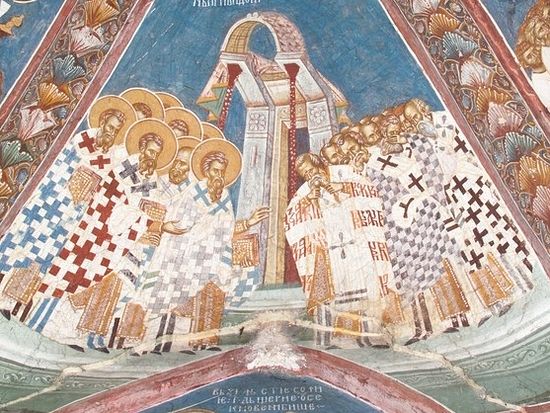 So what is it that motivates me to write on this subject again? It was near the end of Great Lent that there was the bombing of a Coptic church by terrorists in which around forty or so Coptic Christians died. The Orthodox Church did show sympathy, and in some parishes prayers were offered. This is praiseworthy, but it is regrettable that some Orthodox clergy have led their people to conclude that we believe the same thing, and that the Coptic Christians are already Orthodox. Therefore I will write again, and in a more simple way, both reconsider some topics in the former article, and approach some issues formerly unaddressed. In my weakness, through the prayers of St. John of Damascus whose icon I am presently looking at, I hope to accomplish my aim. 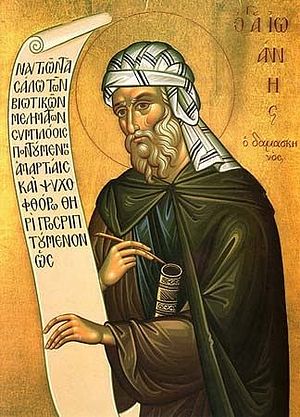 St. John of Damascus Where do I begin? At the place where this began. I will use as a foundation the few words I spoke to the small group at St. Arsenius Hermitage on St. Thomas Sunday and integrate it into an expanded article. Here is how I began that Sunday.

I feel a need to say something which is catechetical, since it is instructional. Recently there was a bombing in which Coptic Christians were killed in their church. Our Orthodox people have shown a lot of sympathy, and in some parishes, priests remembered these deceased during the services. All this is fine, but the problem that has occurred, is that the Coptic Christians were presented as though they are also Orthodox. We do have clergy in the Orthodox Church who believe this. And, I have been told, internet discussion concerning these killings, shows that a number of Orthodox are expressing this opinion. How can this be since the Coptic Christians have been separated from the Orthodox Church since the Fourth Ecumenical Council, in the fifth century?

Over the centuries they have been moving closer to us; in particular, with the dialogues between the Orthodox and Non-Chalcedonians, their Christology appears to be more refined. Indeed, an Orthodox priest who has had much communication with Coptic priests has recently shared with me the following concerning them:

The “One Nature” they confess is meant to emphasize the oneness of Christ’s person. It is St. Cyril’s “one Nature of the Logos Incarnate” which St.Cyril himself clarified, is actually speaking of two natures (“incarnate” implying an additional nature to the Divine). They now accept the Orthodoxy of the two natures ‘without division, without separation, without confusion, without commingling’ (indeed the Copts have inserted St. Leo’s formula into their liturgy in the confession of Christ before receiving communion—similar to ‘I believe, O Lord, and I confess…’). In one of our most recent dialogues, the Non-Chalcedonian bishops present upheld the Orthodoxy of Chalcedon and stated their understanding that it must be interpreted in the light of subsequent Ecumenical Councils which give it clarity.

Then he goes on to admit: “None of this is to say that this has always necessarily been the case. It is they who have moved theologically closer to us. We have not moved at all.”

It was, of course, at the Fourth Ecumenical Council, which dealt with Christology, that they separated from us, as they held a monophysite opinion in relation to the two natures of our Lord Jesus Christ. They recognized He was “from” two natures but no longer considered Him to be “of” two natures. They specially claim to be followers of St. Cyril of Alexandria, and they ardently cling to a phrase he used, that is, “the one nature of the incarnate Word (or Logos)” This was thought of as an expression of St. Cyril, but history has proved otherwise. It is well known that it was an expression of Apollinarian heretics who, in order to give credence to their beliefs, circulated a document under the name of St. Athanasius the Great. St. Cyril took this phrase which he thought belonged to St. Athanasius and sought to explain it in an acceptable manner. After his death it was discovered that this document was a product of the Appolinarians. In Orthodoxy we accept St. Cyril and understand his use of the above mentioned term; but we do not claim to be his followers. We follow the consensus of the whole of our Holy Fathers. This is what is implied when, in the Creed, we call the Church “catholic”. “Catholic” is a compound word, in Greek it is: “kata” which means according to, and “holos” which means wholeness. The idea is to be in accordance with the whole.

There are, however, many of both Chalcedonians and Non-Chalcedonians, who believe that all along through history, it was a language problem, a matter of semantics. However, St. John of Damascus knew their language, and he wrote against them. And if it was all along this language problem, then we would have to say that God made a mistake with the miracle He performed through the Great Martyr Euphemia at the Fourth Ecumenical council. In her coffin she held the Orthodox confession of faith in her hand. And the Non-Chalcedonian confession was at her feet.

Nevertheless, the Coptic Church has continued coming closer to us. Today they claim they are not monophysites and never were, but they are miaphysites. They do explain the two natures in Christ as the Orthodox do, but they say they are in a single united nature, thus they say they are miaphysites. But does two natures in a single united nature equal two natures in one Person? Of course not! Moreover a single united nature made up of two is a compound nature. St. John Damascus writes specifically against this (see the article of March) as did St. Agatho Pope of Rome in the document: “The Letter of Agatho and the Roman Synod of 125 Bishops” which is incorporated into the articles of the Sixth Ecumenical Council1. Now I will pose a question before I move on to one more issue. If we were to accept them as an equally valid church and unite, do we repudiate the article of the Creed: “ONE holy, catholic and apostolic church?”

1 Jesus Christ, the only-begotten Son of God, we acknowledge to subsist of and in two substances unconfusedly, unchangeably, indivisibly, inseparably, the difference of the natures being by no means taken away by the union, but rather the proprieties of each nature being preserved and concurring in one Person and one Subsistence, not scattered or divided into two Persons, nor confused into one composite nature.—emphasis mine (Nicene and Post-Nicene Fathers Second Series, The Seven Ecumenical Councils, p. 340
See also The Divinity of Christ
Metropolitan Ephrem (Kyriakos)
Knowledge of the true God causes us to enter into eternity from this moment, despite the weight of the present unhappiness and misery. We feel the presence of eternity, which comforts us and makes us shine.
Comments

George Arnold6/15/2022 3:17 am
I am certainly no theologian. I am also certainly aware that a substantial number of theologians would disagree with the author regarding the prepositions in question regarding the respective understanding(s) of The Logos. I do think we are remiss in not remembering the considerable persecution Coptic Orthodox Christians have in the past endured that were committed by Byzantine Orthodox, as part of a state sanctioned murderous campaign during the reigns of Leo and Marcion. However important we may feel the language we use to describe our understanding of Christ, to use this disagreement as a pretext for these atrocities is a disgrace more profound than any such alleged heterodox theological opinion.

Edward4/3/2018 10:58 pm
Theology and ecclesiastical history aside, if the massacre of 40+ innocent people on a Christian holiday is what compelled you to write this ignorant opinion piece then you're a deluded, sick and evil man.

Mina Soliman6/28/2017 6:15 am
Actually the four adverbs (without division, without separation, without confusion, without commingling) were first used by St. Dioscorus of Alexandria as evident in the minutes of Chalcedon, not Pope Leo.

Furthermore, agreements with Chalcedonian Orthodoxy is actually based on the theology of people like Dioscorus, Severus, etc. We have not really changed either.

The simplistic picture you paint is misleading unfortunately.

Maximus6/20/2017 7:10 am
Anyone wanting to see the traditional Miaphysite sources for the reasons WHY the Anti-Chalcedonians rejected Chalcedon should take the time to read: Fr. Shenouda M. Ishak. Christology and the Council of Chalcedon

Fr. McGuckin states: "This is no work that suggests that the refusal of Chalcedon was a result of political or geographical isolation (arguments that are often found in modern text from historians who have clearly never read the theologians carefully)."

Editor6/18/2017 3:17 pm
The question of whether the Malakara or Coptic churches are Orthodox is a matter of theology. The reunification of the Russian Church Abroad and the Moscow Patriarchate was not at all a matter of theology. The Church Abroad never changed their theology or dogmas, they simply stopped commemorating the Moscow Patriarchate and ceased concelebrating with members of the MP or serving them Communion. This was due to communism in Russia and the MP's lack of freedom under the atheist regime. But both Churches were absolutely Orthodox and so the reunion was possible.
The Orthodox have love and respect for the Oriental churches, and pray that any theological division be resolved.

Santosh Samuel6/18/2017 12:36 am
Are Coptic Christians (and the Armenian, Syrian, Malankara [Indian], Ethiopian and Eritrean) Orthodox? Yes, notwithstanding Gregory's academic presentation. As a laity of the Malankara Orthodox Church would i be bothered if someone from the Russian Orthodox Church insists my church is not Orthodox? Quizzical yes, bothered no. I suppose the Coptics would feel the same. In that sense i find the thrust of the article unwanted and aggressive. Maybe an article that lists out the commonalities would give us a better picture how close/far the non-Chalcedonians and the Chalcedonians are. Or better still a comparison of the liturgical practices? (I would not be surprised at all of we have some common liturgies!)

That's an interesting question. When the Moscow Patriarchate received ROCOR, which was in schism from the entire canonical church, back into communion, as an equally valid church, and made it an autonomous metropolia, in 2007, did the Moscow Patriarchate and the rest of Eastern Orthodoxy repudiate the doctrine of one holy Catholic and Apostolic Church?

Who is a saint, then? John Maximovitch or Elder Joseph the Hesychast?

Paul Yohannan6/17/2017 9:35 pm
Your claim that the mia physis formula used by St. Cyril is of Apollinarian origin is unproven, and makes no senss in the context of the Nestorian heresy he was fighting. Conversely, most scholars agree that Severus of Antioch composed the hymn Ho Monoges and that St. Justinian inserted this hymn into the Byzantine liturgy as part of his efforts to obtain a reconciliation and wuash the active pro-Nestorians (see the Three Chapters Controversy). The scholarly consensus is that Severus also wrote the original Presanctified Liturgy. Shall we delete these on the grounds of their supposed heretical origins? And what about the numerous EO monks and bishops who support reunion?

V. Barnabas6/16/2017 3:16 pm
So, let us pray that they grow even closer to the Orthodox Church, and be finally reunited.
Gospodi pomiluj. Kyrie eleison. Lord have mercy.
×