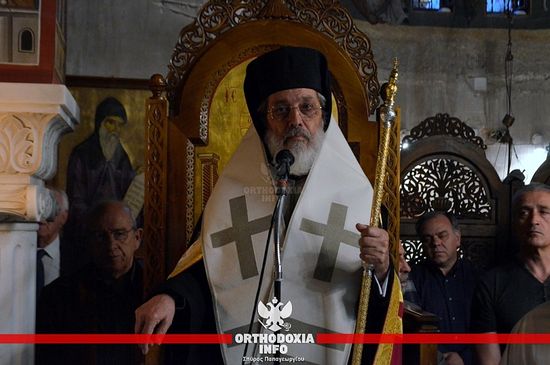 Fr. Photios Tzouras, a priest of Stavrodromi, Serres, Greece, has ceased commemoration of his ruling hierarch, Metropolitan Makarios of Sidirkastro, ortodoxia.info reports. The priest recently announced his decision to his parish community.

As he informed the congregation, Fr. Photios appreciates and respects Met. Makarios, but is forced to stop commemorating him at the Divine Liturgy as he does not take a stand against the ecumenistic practices and attitude of His All-Holiness Ecumenical Patriarch Bartholomew in regard to Roman Catholicism, which the priest considers to be heretical.

Emphasizing that by this act he was neither creating nor entering into a schism, Fr. Photios also told his congregation that he intended to consider serving them in the same parish, in the same diocese. Rather than an act of scorn or rebellion, Fr. Photios explained that he hopes this action will act as a catalytic medicine to bring Metropolitan Makarios back to a strong confession and defense of the holy Orthodox faith. However, he did add that he would step aside if ordered so by the diocese.

This is precisely what happened, as Met. Makarios responded quickly, forbidding Fr. Photios to serve the Divine Liturgy.

Regarding the style of the priest’s letter to the bishop, Met. Makarios said it reminded him of similar announcements that had been made in Thessaloniki. The prelate is likely referring to Fr. Theodore Zisis and Fr. Nicholas Manolis, who ceased commemoration of Metropolitan Anthimos of Thessaloniki for his acceptance of last year’s Crete council. For this action, Fr. Theodore was suspended, stripped of his honorary “archpriest” title, and forbidden from the chalice.

In addition to Frs. Theodore and Nicholas, Fr. Photios joins a number of other priests and monastics who have ceased commemoration, referring to Canon 15 of the First-Second Council, held in 861 in Constantinople under the chairmanship of St. Photios the Great, which states that if a bishop openly declares a heresy previously condemned, a priest may cease to commemorate him without ecclesiastical sanction. This “walling off” is not considered a schism, but rather, according to the canon, is to be praised. However, the same canon states that if a priest ceases to commemorate a bishop over a heresy not previously condemned, then his action is considered one of schism.

Note that among critics of the Crete Council there is disagreement over how to proceed. In January, Metropolitan Hierotheos (Vlachos), one of the most respected bishops and theologians in the Church today, who has offered several weighty critiques of the council, urged others not to cease commemoration of their hierarchs. Defense and Declaration of Cessation of Commemoration of Bishop on Account of the Teaching of Heresy
Letter of Protopresbyter Theodore Zisis to Metropolitan Anthimos of Thessaloniki (March 3, 2017)
Protopresbyter Theodore Zisis
"With sorrow, but also with much spiritual joy and happiness, I wish to inform you by means of the present letter that I am ceasing to commemorate your name during the holy services following the Apostolic and Patristic tradition as this pertains to communion with heretics on account of the fact that you, along with many of your fellow bishops, have abandoned the Holy Tradition and strayed from the path of the Holy Fathers." Anthony6/22/2017 9:42 pm
''Do not have any interactions whatever with the Arians, the heretics for you know how filthy they are in my sight because of their blasphemy of the Lord Jesus Christ" - St Anthony the Great

Professor Demetrios Tseleggides speaking with Elder Efraim of Katounakia: ''So I asked him on the matter in hand - if he could tell me what kind of thing Ecumenism is.
He replied outrightly and without any difficulty:
«This question, my child, had also been posed by someone else, some time before you. I myself have been up here on these rocks for forty years... I have even forgotten my Greek (note that he had completed Middle School) and as such, I haven’t preoccupied myself with that issue. But, because I had to reply – seeing that I had been asked about it, and since I had no knowledge of the matter - I went to my cell and prayed, asking Christ to inform me what Ecumenism is. I received His reply, which was that Ecumenism has a spirit of wickedness and is dominated by unclean spirits».

There we have it - St Anthony the Great tells us to have nothing to do with heretics because of their filth. The Lord Jesus Christ told Elder Efraim that ecumenism is dominated by unclean spirits. Therein lies the answer as to whether or not we should separate ourselves from heretical bishops.
×