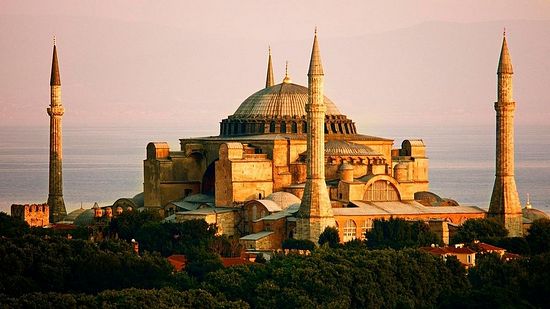 The US Department of State has called on Turkey to respect and preserve the special historical significance of the great Agia Sophia church in Constantinople. The call came in yesterday’s press briefing, with department spokesperson Heather Nauert responding to a question about the reading of the Koran that took place in Agia Sophia on Wednesday evening—an action which caused international consternation.

During the press briefing, a representative of Mega TV Greece noted that President Recep Tayyip Erdoğan of Turkey wants to turn Agia Sophia back into a mosque, and that Muslim prayers were held Wednesday evening in the church, with government officials attending, asking the State Department’s position on the matter.

In response, Nauert expressed the department’s call for Turkey to maintain a proper attitude towards the ancient cathedral, stating, “Agia Sophia is a site of extraordinary significance, and we understand that and we respect that. So we call on the Turkish Government to preserve the Agia Sophia in a way that respects its complex history.”

President Erdoğan stated in April that Kemal Ataturk’s order to transform Agia Sophia from a mosque into a museum is a fake. At the same time he announced that he intended to read Muslim prayers in Agia Sophia on Holy Friday, which was to be “a performance against the Crusades,” and a symbolic act of transforming the museum back into a mosque.

The head of the Turkish Presidency of Religious Affairs Mehmet Görmez held a prayer and read the Koran in the ancient Christian church on Wednesday evening, as a part of the Laylat al-Qadr night ceremony, when Muslims celebrate the supposed revelation of the first verses of the Koran to Mohammed.

The Greek Foreign Ministry called the meeting “an unacceptable challenge to the religious sensibilities of all Christians.” Greek President Prokopis Pavlopoulos also expressed his exasperation on Friday, reports ekathimerini.com, saying that Turkey cannot have European aspirations if it fails to respect monuments like the Agia Sofia. Other Greek leaders raised their concerns with UNESCO, which in turn told Turkey that the monument must remain a cultural monument. Turkey angrily responded on Friday, accusing Greece of violating the religious freedom of Muslims in Greece.

Following up, the Greek television correspondent pressed Ms. Nauert: “So does that mean you’re opposed to the idea of turning it into a mosque?” with the spokesperson giving a typically diplomatic answer: “I’m not saying that at all. It’s a complex history, and we recognize that it is of great significance to other faiths, many faiths. And so we would just encourage the Turkish Government to do that, to preserve it.” Anna6/27/2017 8:50 am
Have the Turks no self-respect? if I were a muslim I would rather eorship in tge open air than in a worshipping place of "kuffars"

Anthony6/26/2017 6:13 pm
@Gerry. No Jezza. They do not pray to God. We do not all believe in the same God. Allah is not our God. Neither is buddha or the hindu cows. The Orthodox Christian faithful confess God the Father, God the Son and God the Holy Spirit. One God in three persons. The Triune God. Capiche.

Gerry6/24/2017 4:08 pm
Whilst prayers in any religion shouldn't matter whether they are in Arabic, Jewish or Chinese, they pray to god. However deforming and converting such a historically important site into a mosque is not acceptable. I'm very sure converting mosques or synagogues to churches would be seen in a very different light.
×