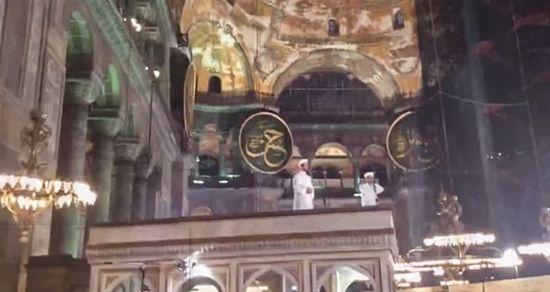 Turkey has again provoked the international community with a reading of the Koran in Agia Sophia that was broadcast on Turkish state television, reports Romfea.

The new provocation came on Wednesday evening, when the head of the Turkish Presidency of Religious Affairs Mehmet Görmez held a prayer and read the Koran in the ancient Christian church of Agia Sophia. According to Turkish law, the Presidency, or Diyanet, is “to execute the works concerning the beliefs, worship, and ethics of Islam, enlighten the public about their religion, and administer the sacred worshiping places.”

The reading, decried as “an unacceptable challenge to the religious sensibilities of all Christians” by the Greek Foreign Ministry, came as a part of the Laylat al-Qadr night ceremony, known as the Night of Decree, Night of Power, Night of Value, Night of Destiny, or Night of Measures, when Muslims celebrate the supposed revelation of the first verses of the Koran to Mohammed, believing that Allah’s blessings are especially abundant on this night that falls late in Ramadan.

The Presidency of Religious Affairs even added the video to Twitter, with the seal of the Turkish government overlaid onto the footage.

The Koran was also read out daily in Agia Sophia during the month of Ramadan in 2016. President Erdoğan of Turkey similarly angered the Greek and broader Orthodox and Christian world when he announced in April of this year that he would read Muslim prayers in the church on Holy Friday, one of the holiest days of the year for the Christian faith. He also claimed that Kemal Ataturk’s order to transform Agia Sophia from a mosque into a museum is a fake.

Although in the end the president did not read the prayers, a large crowd later gathered outside the church on May 13 to read their morning prayers, and to demand with the motto “Break the chains, open the Agia Sophia,” that the museum be turned once again into a mosque. The AGD takes as its mission the words of the late Islamist leader Necmettin Erbakan, “Life is faith and jihad.”

The Greek Foreign Ministry condemned this latest ceremony, reminding that Agia Sophia is a UNESCO-protected monument of world cultural heritage. Its message reads:

“We condemn the reading of the Koran and prayers in the presence of the head of the Turkish Prime Minister's Department of Religious Affairs within Agia Sophia, which was televised on Turkish state television.

Agia Sophia is a UNESCO monument of world cultural heritage. An attempt to transform it into a mosque, through reading the Koran, praying, and a series of other actions, is a challenge to the international community, which must be properly mobilized and react.

This is a manifestly unacceptable challenge to the religious sentiment of all Christians and those who honor the cultural heritage of mankind, which should be promoted at this time, instead of undermining interfaith dialogue.

We call upon Turkey to show the attitude of a modern and democratic country and to protect the universal character of Agia Sophia, respecting the centuries-long tradition of this universal monument.” Anthony6/22/2017 10:53 pm
Kyrie Eleison. The Greek state is trying to destroy the Orthodox Church in Greece, and at the same time they hypocritically howl and shriek and tear their hair out at the Moslems reading in Ayia Sofia. You seriously couldn't make this up.
×