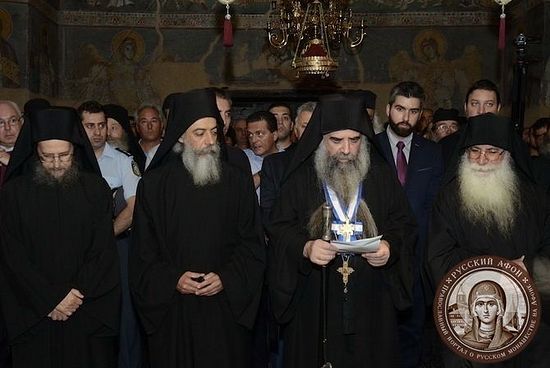 The Sacred Community of Mt. Athos has sent a letter to the Ministers of Education and Justice of the Greek Republic in connection with the scandalous new bill proposing to allow anyone 15 years or older to legally change his sex simply by letter, reports AgionOros.

With their letters, the representatives of the 20 Athonite monasteries have joined the society and Church-wide protests against the new draft law, which was ratified by Greek parliament in its first reading.

“In connection with the proposed bill, we are engulfed by unease as to what the future is preparing for us. Is it really permissible in our Orthodox fatherland to legally and blatantly defy Divine law? So God created man in his own image, in the image of God created he him; male and female created he them (Gen. 1:27).”

The Sacred Community also supported the parents who are protesting the Ministry of Education’s new and widespread materials for teaching religion. The Athonite monks expressed outrage over the fact that, unlike representatives of religious minorities, who receive confession-oriented education, those from Orthodox families are propagandized with the idea “that all religious are equal,” thereby “inducing them towards agnosticism and atheism.”

The Athonites finished their letters with the words of St. Paisios the Athonite: “In these difficult times, every one of us must do whatever is humanly possible, and what is humanly impossible, leave to the will of God. Thus our consciences will be calm, because we have done what we could. If we do not resist, then our ancestors will rise from their graves.”

In a recent homily, Metropolitan Nicholas of Phthiotis stated that the normalization of adoption by homosexual couples is precisely the underlying purpose for this new bill: “Today they tell us that God did not create man and woman, driving the idea from the minds of our children. Every man can easily become a woman, and every woman a man. Do you know why they are doing this?” His Eminence rhetorically asked. “They want to ensure, at any cost, that homosexuals will be able to adopt children,” he answered.

For his part, Metropolitan Kosmas of Aetolia strongly stated, “You are promoting a bill which denies the Triune God and Creator and casts blasphemy upon Him. This new law is unnatural, it encroaches upon the psychosomatic identity of the person, fosters depravity, and aims to thwart a person on his path to sanctification and deification.

The Holy Synod of the Greek Orthodox Church met on Thursday to respond to the bill, stating, in part, “The proposed bill arouses emotions in society, attacks the sacred institution of the family, contradicts good morals and common sense and destroys man. Instead of diminishing confusion and mental disorders, it will increase them and give rise to a dangerous social phenomenon, especially when it creates an explosive situation in schools as well.

In addition to a multitude of parliamentarians, the scandalous bill has also been supported by Prime Minister Alexis Tsipras, who also was recently the target of an Athonite protest. Black flags with the inscription “Keep the Antichrists off the Holy Mountain” have been posted in the Athonite monastery of Dochariou as a protest against the previously-planned visit of the prime minister to the Holy Mountain.

"Sex Change" Surgery: What Bruce Jenner, Diane Sawyer, and You Should Know
The dark and troubling history of the contemporary transgender movement, with its enthusiastic approval of gender-reassignment surgery, has left a trail of misery in its wake.
Comments
×