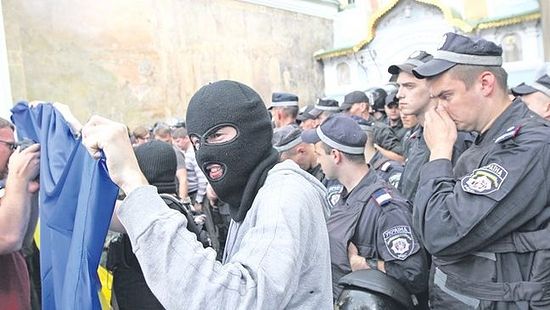 Deputy abbot of the Kiev Caves Lavra Metropolitan Paul of Vyshgorod and Chernobyl has raised the issue of a possible attack against the holy site by radical forces during the days of the feast of the Holy Protection of the Mother of God, October 14-17, reports Vesti.

The bishop has composed a letter, addressed to President Petro Poroshenko, Prime Minister Vladimir Groisman, the public prosecutor and Ukrainian Security Service, the head of the national police Sergei Knyazev, and the head of the Ministry of Interior Affairs Arseny Avakov, with a request to suppress all attempts at aggression against the lavra. “We really hope that people will not raise a hand against this sacred site and this will not happen. We are not occupied with politics, we pray. But I’m constantly receiving calls from various political powers warning about a possible attack against us,” Met. Paul writes.

Leader of the Organization of Ukrainian Nationalists Nikolai Kokhanivsky stated that their organizations, together with the groups the Right Sector, Freedom, and the National Corpus will hold the “March for the Glory of Our Heroes” in Kiev, passing through Maidan Square, where the bloody 2014 revolution took place, moving down St. Michael Street, along which sits the Kiev Caves Lavra. 10-20,000 are expected to participate in the march.

Advisor to the Minister of the Interior Ivan Varchenko has stated that he has not heard of the radicals’ plans, but has promised that in the case of emergency, all preserved objects will be protected.

Met. Paul also recalled that at the same time a year ago, 500 people in ski masks gathered near the monastery, insulting believers and throwing stones at the lavra. Last year on October 14, participants in the “March of the Nation” procession, which included members of the Right Sector, which routinely seizes canonical churches and physically assaults clergy and believers, set off pyrotechnics near the Caves Lavra.

In July of this year, nationalist Viktor Trigub spoke about discussions “to take control of the Ukrainian Lavra reserve,” and in July of last year, former advisor to the Minister of the Interior Ilia Kiva declared his desire to free “the Lavra from seizure and violence by the FSB ghouls in riassas.” Schismatic priests invade Kiev Caves church
During a recent visit to the Kiev Caves Lavra, Ukraine’s holiest site, Ukrainian nationalist-schismatics defiled the holy Dormition Cathedral with their illicit prayers. The group brought their own “Kiev Patriarchate” priests on an “exhibition” to the ancient monastery, and began serving a Moleben in the canonical church.

Petitions in defense of Kiev Caves Lavra gain necessary number of signatures
The collection of signatures for retaining the Kiev Caves Lavra within the canonical Ukrainian Orthodox Church is a response by Orthodox Christians to another petition, accepted for consideration by the Kiev Council on December 9. The authors of that application accused clergy of the Ukrainian Orthodox Church of the Moscow Patriarchate of “the anti-Ukrainian, mercantile position, at times hostile towards the Ukraine” and called upon the deputies to further the transfer of the Kiev Caves Lavra to the so-called “Kyiv Patriarchate”, unrecognized throughout the Orthodox world.
Comments
×