The Ternopil Region: Standing Firm in the Faith

Over thirty churches of the canonical Ukrainian Orthodox Church (the UOC-MP) have been seized in Ukraine since the Euromaidan Revolution. The most severe trials befell the western regions of Ukraine. With the connivance and even support of local authorities the schismatics and “the Right Sector” militants were particularly violent in the Dioceses of Ternopil and Rivne. In the Ternopil region the situation deteriorated to such an extent that on October 15, 2015, a schismatic of “the Kyiv Patriarchate” Anatoly Zinkevich, from the rostrum of the Ternopil Regional Council called for a takeover of the Pochaev (Pochayiv) Lavra which belongs to the canonical Church. In the Katerinovka village of the same region, eighteen believers who tried to protect their Church of the Greatmartyr George of the UOC-MP jurisdiction were attacked and beaten by militants. Despite several court rules that the church be returned to its legal owners—that is, the Orthodox community—it still remains in the hands of the schismatics. 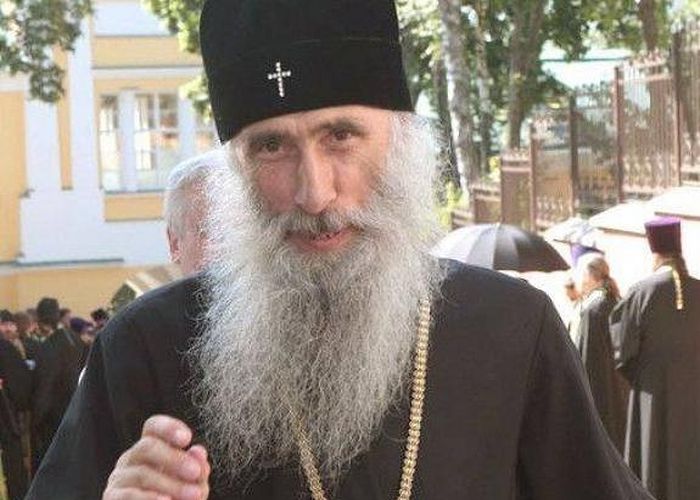 And over a short period of time the village believers built a new church for themselves. The Orthodox faithful raised over 120,000 hryvne for the laying of their church’s foundation alone. After the consecration of the church and the Divine Liturgy, Metropolitan Sergy, the ruling hierarch, noted that “podvig [spiritual labor] is neither in physical strength, nor in human power, nor in worldly glory. It is in a gentle, meek, obedient and true heart.” 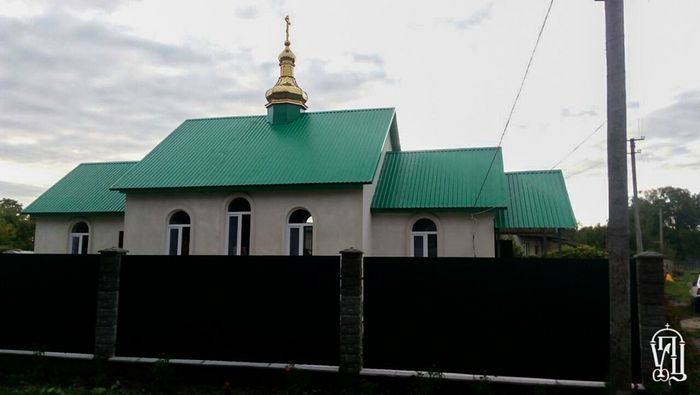 Two years ago the author of this article managed to visit Katerinovka soon after the infamous mass beating of September 21, 2015. As we drove up to the seized church we saw the following: locks with security stickers hung on the doors, barbed wire over the broken down fence and a police car standing in front of the church. Several days before, the blood of the church’s defenders had been shed there. Thugs from “the Right Sector” in balaclava helmets had beaten the faithful with clubs, twisted their arms and used tear gas. On that day it seemed to me as if the village was deserted: its very heart—the holy church (where from time immemorial many generations of people had prayed, been baptized, married, and had their funerals)—was wounded and bleeding. We were led into the house of Anna—the lady in charge of parish matters—where a group of women gathered. Seventy-year-old Elena Nikolaevna who lives near the church related how the violent bandits had burst into her house, demanded the church keys, threatened and taunted her.

The choir director Neonilla, a teacher by profession, suffered real persecutions: Her neighbors with whom she had lived in peace for decades called her “a moskalka” [in today’s Ukraine, a derogatory name for “a Russian woman”] and “an accomplice of the separatist killers”. The church rector Archpriest Sergy Gladun was taken to the hospital. His wife Valentina was at home with three small children during the takeover of the church—the raiders tried to force the door, knocked on the windows, and so the kids suffered real stress. A video of the mass battering in the village Katerinovka spread all over the internet. The Synodal Information and Education Department of the UOC-MP in Kiev held press-conferences with the participation of the victims from among the villagers. Ukrainian courts of different levels ruled that it was an illegal raider seizure of the church, yet the bodies of local self-government simply ignored these court decisions. It is not surprising as the operation of the takeover of the church was headed not only by “the Right Sector” members but also by the village council’s chairwoman Viktoria Drel. Churches in other of Ukraine’s western regions were taken over according to the same scheme. 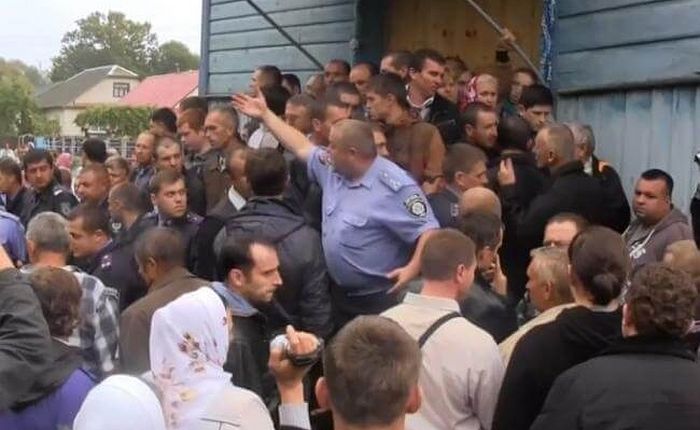 The seizure of the St. George’s Church in Katerinovka on September 21, 2015.

At that time, the elderly schismatic and pseudo-patriarch Philaret (Denisenko) again and again received “the Right Sector” leaders at his office and awarded them as “patriots” struggling for “the independent Church” in the country.

When all became quiet, the village residents in Katerinovka began “to come to their senses”: many of them refused their signatures in support of transferring the church to “the Kyiv Patriarchate”. Meanwhile, the ejected community worshipped in the house of one parishioner and obtained a plot for the building of a new church. And the most amazing thing is that people started donating funds. “They will certainly fail!” the malevolent schismatics ranted. However, the captured temple remained empty—only a handful of “svidomy” (that is, “conscientious” in Ukrainian) residents attended services. These were mostly former Communists and atheists who knew little about Orthodoxy, and are politically committed and very aggressive. But the confessors for their faith “didn’t fail”. The new church was finished and consecrated less than two years later. 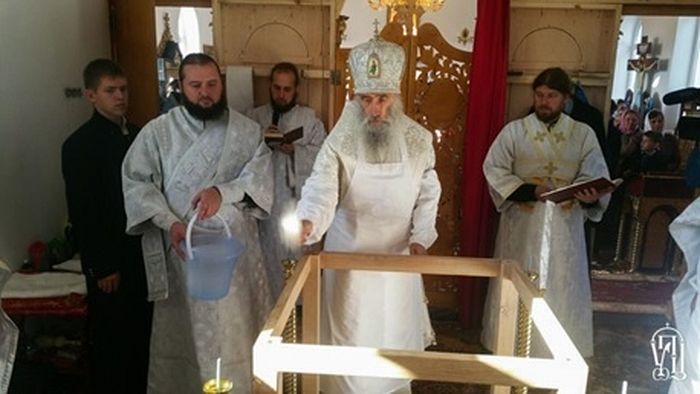 The consecration of the altar on September 8, 2017.

In his sermon, His Eminence Metropolitan Sergy recounted how the UOC-MP cathedral in Ternopil (located 22 Russkaya Street) had been taken away from the faithful [by the Uniates] in the early nineties, how the authorities had refused to give them a new plot for a long time, and how with the help of God the faithful had finally managed to build a beautiful cathedral in honor of the Holy Martyrs Faith, Hope, Love and Sophia in a short time.

During his stay in the Holy Land, Vladyka Sergy prayed hard, asking the Lord to tell him who he should dedicate his new cathedral and its main altar to. After the service a young nun came up to the metropolitan and made a donation for the building of the cathedral. “What is your name?” His Eminence asked. “Vera,” (Russian for Faith) she replied. Thus the metropolitan decided to consecrate the cathedral in honor of the holy martyrs Faith, Hope, and Loe and their mother Sophia! 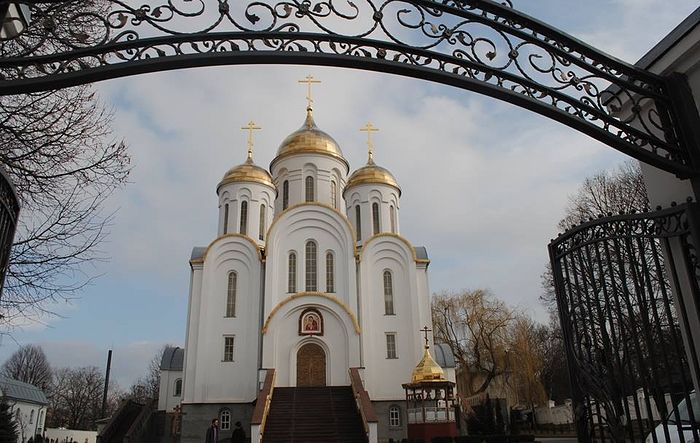 The present cathedral in Ternopil.

The new cathedral of Ternopil is the pride of the city and a gem of Orthodox architecture. Mosaicists from Ukraine, Russia and Belarus worked here with prayer with the blessing of Metropolitan Sergy; the church is adorned with a mosaic floor of white and coffee-colored malachite, there is a snow-white stone iconostasis, mosaics depicting the Last Supper and the Theotokos “Oranta” in the apse, and a mosaic of Christ the Pantocrator under the main dome.

The cathedral is filled to capacity during services despite the fact that Ternopil, like other cities of Western Ukraine, remains a center of radical nationalists and haters of the canonical Church. But, according to the apostle, Where sin abounded, grace did much more abound (Rom. 5:20). New Orthodox churches are being built and the number of parishioners is increasing. And for all these years and even decades Vladyka Sergy has repeated this phrase many times: “Persecution is the test of our faith.” For, according to Christ, Blessed are ye, when men shall revile you, and persecute you, and shall say all manner of evil against you falsely, for my sake. Rejoice, and be exceeding glad: for great is your reward in heaven (Mt. 5:11-12).

Metropolitan Sergius of Ternopil: “We will defend our holy places”
On the violent takeover of a church in Katerinovka
We simply cannot leave our church to its fate or hand it over to someone else. Now some people have lost the fear of God and do not want our communal prayer to continue in the church. And we will do our best to defend our holy places.
Comments

Anthony 9/30/2017 7:43 pm
The false construct that is the so-called ''Ukraine'' cannot and will not last. The devil's workers in western Babylon have simply hastened the end of this technocratic pseudo-state. As Father Andrew rightly points out it is likely to split between Russia, Poland, Hungary and Romania. The sooner the better. At least the war can end and all peoples in that sorry state can go back to living with those with whom they identify. God gave each nation their own boundaries. Let it be.
×