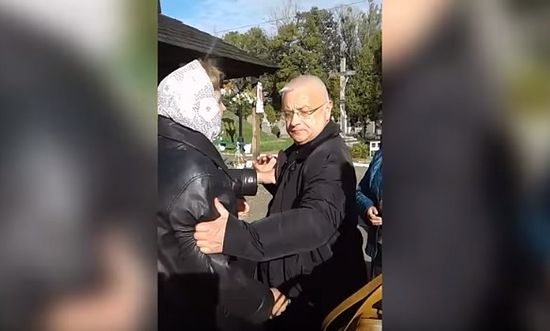 A group of young men in ski masks, headed by Uniate priests, used brute force to stop parishioners of the Annunciation Church from entering and holding Divine Liturgy yesterday. The video shows people being punched and kicked.

One of the active organizers of the provocation Uniate priest Nikolai Medinsky is seen punching Orthodox faithful, and harassing them, calling them “Moscow pigs.” The Uniates promised to “smash” those who were videotaping their abuse.

Parish rector Fr. Vasily Kobelsky noted that the riots had begun the previous Sunday, when a Uniate priest threatened the Orthodox faithful with a Kalashnikov gun.

The battle over the church has been dragging on for several months. On June 4, 2017, the feast of Pentecost, Uniate priests with the support of soldiers of “the Black Hundred” group made a raider siege of the church, fraudulently entering the church and celebrating their liturgy there. The Ukrainian Orthodox Church made a statement soon after, explaining the historical situation surrounding the parish.

On October 4, the Ivano-Frankivsk district administrative court recognized the legitimacy of the Ukrainian Orthodox Church’s claim to the building, which the Uniates have ignored. The Uniates again seized the church yesterday, while about 60 police officers passively watched, according to the Union of Orthodox Journalists.

“The state has an obligation to simply stop the ongoing infractions. The government should abide by the laws it itself has written. The governmental authorities need to fulfill their functions, not just watch the doers of lawlessness,” stated Archpriest Nikolai Danilevich, the deputy head of the Ukrainian Church’s Department for External Church Relations. Statement of UOC on attempted seizure of Annunciation parish by Uniates Schismatic priests invade Kiev Caves church
During a recent visit to the Kiev Caves Lavra, Ukraine’s holiest site, Ukrainian nationalist-schismatics defiled the holy Dormition Cathedral with their illicit prayers. The group brought their own “Kiev Patriarchate” priests on an “exhibition” to the ancient monastery, and began serving a Moleben in the canonical church.
Comments
×