Did The Early Church Believe in Icons? 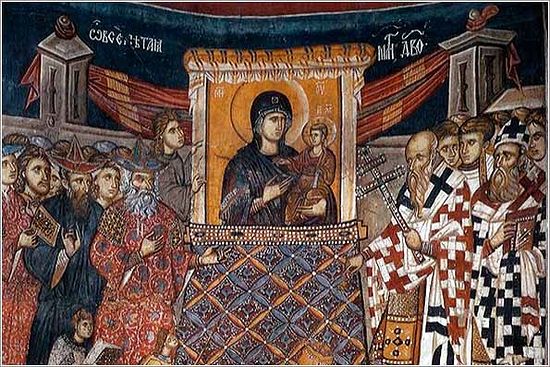 In today’s gospel we hear the familiar story or parable of the sower. Our Lord teaches us that the seed is the word of God. The parable is about what happens when in our hearts we either accept or reject the word of God. There is however one potential, what happens when two different groups of Christians each claim to be following the word of God and yet they come up with dramatically different interpretations and ideas based on the same texts? This issue has troubled many Christians throughout the centuries of Christian history. If I use the Bible, and you use the Bible and we both come to extremely different understandings of the Scriptures, how do we know whose interpretations is correct? How do we discern the truth from falsehood?

The Church has a similar structure that works to interpret the Scriptures and the New Testament properly. This structure is known as an ecumenical council. These are gatherings of great numbers of bishops from all over the world who would come to one place to pray together, to reason, to debate and ultimately to bring to light the genuine Christian teaching on whatever controversy or issue needed their attention. But unlike the Supreme Court, this was not simply based upon their human opinions but we believe it is guided by some other factors.

One factor is that there is a universal tradition or teaching that was passed on from place to place and person to person. There is a teaching that comes directly from the Apostles and has been preserved among those who rightly believe. The main guarantors of this teaching of the Apostles were the bishops who had been appointed in every place or region. This is one of the reasons why a bishop is never consecrated by simply one bishop, but by two or three. This demonstrates that there is unity among them and that multiple leaders of the Church have vouched for this man’s Orthodoxy and faith. When a gathering of bishops, who have the same faith and doctrine and have been themselves consecrated as bishops by others who held the same faith and doctrine and can trace this faith and doctrine throughout the history of the Church all the way to the Apostles, you know that this is a special and powerful gathering and it is one that can only happen in the Orthodox Church because it is only in the Orthodox Church that we have an unchanged and unbroken connection all the way back to the Apostles of Jesus Christ. That is a bold statement yet it is totally true and easily verifiable through a historical analysis with discernment.

The second factor in the guidance of the Holy Church is the presence of the Holy Spirit in the midst of the assembly. When our Lord the Holy Spirit is present in our midst, error vanishes and the truth is proclaimed. The Church has had many such gatherings over the past two thousand years. We commonly say that there were seven ecumenical councils but that is not necessarily the case. It is really an oversimplification but it is true that there were 7 major gatherings to discuss and discern major issues within the life of the Church. Our Church is always remembering important events and people within it’s life. It is our common remembrance that helps us pass on the truth and the life of our faith from generation to generation. We begin by remembering the Lord’s betrayal, death and resurrection every time we come here for the Divine Liturgy.

Today we remember the Seventh Ecumenical Council which took place in the city of Nicaea in 787 a.d. This gathering came together to discuss the removal and the forbidding of icons in all of the holy churches under the Emperor Leo III in 726. Please take note that the state or government has been trying to find ways to subvert and change the Christian faith in every single generation, not just ours. Sometimes, standing for what is right means going precisely against what we are taught by the government and those that speak and teach on behalf of the government. This issue of the icons really caused a deep divide within the life of the Church because Leo and those who followed him, used Scripture and equated the creation of icons and their use with the idolatry that was forbidden since the time of the prophet Moses. They were further convinced because they saw the rapid rise of Islam and Muslims also taught that images were forbidden.

The bishops of the One Holy Church gathered together not to decide anything of themselves or their own opinions, but to discern the original teaching, the truth of the faith as it had been handed to them. They quoted extensively from St. John of Damascus who had died some years before the council, and was the most well known defender of holy iconography. He taught that the veneration of holy images was always part of the unwritten tradition of the Church but he showed how it was demonstrated even during the time of Moses, for instance with the creation of the cherubim who were fashioned by men and overshadowed the ark of the covenant. This was in direct conflict with a straight reading of God’s commandment to make no graven images. However St. John rightly points out that they were not created to be worshipped as idols. God instructed them to be made so that we would have a more rich experience of worship that points past the symbol to a greater reality.

Icons are symbols that direct our minds to the living God who actually sanctified all of matter when He took flesh and became man. Icons are not something that we worship. We venerate them, knowing that our veneration is not really for the wood or the paint, but for the Word of God who made all of this possible when He appeared on the earth and was seen by men. Not only do we support the use of icons, we go further than that. The Orthodox Church says that you must have icons in your place of worship because icons, especially of Jesus Christ, remind us that Christ was not a mere spirit but was fully God and fully man. That He was seen and heard and known. That He truly existed, and truly redeemed all matter and all creation by His coming. May God help us to truly believe this and to live accordingly. Glory be to God forever AMEN. Be Good Soil! The Parable of the Sower
Fr. Seraphim Holland

Be Good Soil! The Parable of the Sower
Luke 8:5-15 Twenty First Sunday after Pentecost
Fr. Seraphim Holland
There are four kinds of men described in this parable, and, three of those kinds perished. All of humanity fits into one of these categories, and the majority will perish. This is true in our age, and has been true in every age.

Consequences of the One Church – Unecumenism
Fr. Stephen Freeman
Put yourself in the fourth century. There is only one Church, and that Church is One.
Comments
×