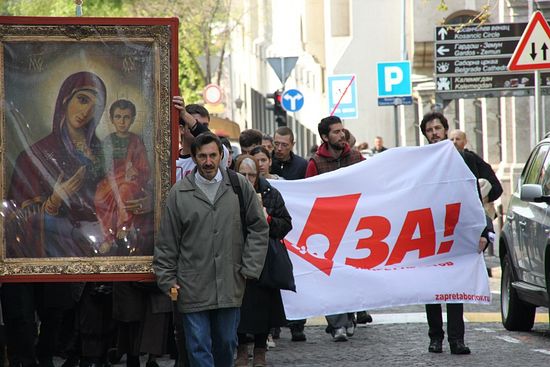 Believers process against abortion in Belgrade in 2014

Hierarchs of the Serbian Orthodox Church have sparked controversy with their recent remarks against the grave sin of abortion, reports the Qatar newspaper The Peninsula, which denigrates the hierarchs’ words as “attacks on the right to abortion in the patriarchal Balkan region.”

Preaching at a Divine Liturgy last month, Metropolitan Amfilohije Radović of Montenegro and Litoral spoke of abortion as the murder of children, which is the undoubted position of the Orthodox Church.

“Serbian women kill more children each year in their wombs than Mussolini, Hitler, Broz [the late Yugoslav leader Josip Broz Tito], and those in Kosovo,” he said during the service in Kosovo’s western city of Peć.

In response, Belgrade lawyer Jelena Drenca has called on the Serbian Orthodox Church to take “disciplinary measures” against His Eminence in order to “prevent the Church from facing legal action,” given that his statements came at his “place of work” and therefore amounted to “a violation of the law on discrimination.”

His Holiness Patriarch Irinej also made waves when he told a Serbian newspaper that it is a “woman’s duty to give birth in order to regenerate the nation.” The number of annual abortions is twice that of births in Serbia, according to InSerbia. The patriarch met with Serbian President Aleksandar Vucic on October 28, after which a statement from the presidency stated that both men were worried about the country’s very low birth rate.

“How can the woman decide alone, with complete impunity, on the life or the killing of a future newborn who is unprotected and innocent? Where is the morality, the conscience?” said a statement from the Church in response. “Abortion is not just a legal, demographic or political issue, it is primarily existential, ethical and axiological,” the statement said. By abortion we offend God Who allowed the child to be conceived—Abbot of Dochiariou Monastery on Mt. Athos

By abortion we offend God Who allowed the child to be conceived—Abbot of Dochiariou Monastery on Mt. Athos
Abortion is the sin of our age. And as Orthodox Christians we must organize a sort of a resistance on this front in order to bring the heavy burden of this sin to people’s notice. Abortion is dreadful murder says Archimandrite Ephraim
"A heavy responsibility lies on the shoulders of those who allow abortions. A crime is committed by physicians, parents and the woman who gets an abortion." Abortions, same-sex "marriages" and egoism will lead the world to catastrophe
Now mankind is facing the prospect of depopulation—something that earlier happened only once—in the 14th century during the "Black Death". In the end, the "demographic winter" is based on the loss of faith and hope. That is why, it is not a coincidence that Western Europe, which has largely deviated from Christianity, now has the lowest birth rate in the world. .
Comments

gheorghe11/1/2017 9:30 am
He is perfectly right.
The masonic state is denying the Truth and the legal matter is against the Lord.
Our Father to protect, help and strengthen him to spread the Word and give people the only way to the Heaven.
×