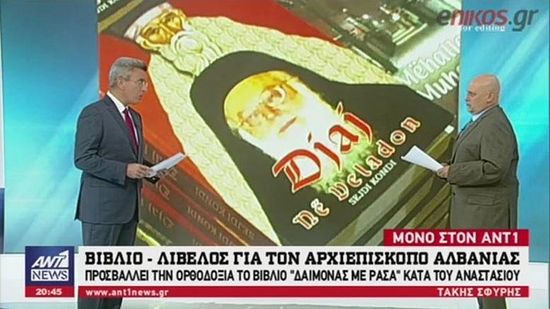 Orthodox Christians in Albania were shocked and insulted by a presentation that took place during a recent book fair in the capital city of Tirana. The book that was unveiled, Demons in Cassocks, depicts Albania’s most beloved saint Kosmas of Aetolia, as well as the current primate of the Albanian Orthodox Church Archbishop Anastasios of Tirana, Durrës and All Albania, reports AgionOros.

The Greek TV station ANT1 reports that the book is specifically aimed against the Orthodox Church and the Greeks living in Albania.

The author of Demons in Cassocks Sejdi Kondi is widely known for his nationalist views. He has repeatedly called for the expulsion of Orthodox Greeks from Albania.

Orthodox Christians and Greeks are no strangers to persecution in Albania. Two churches and four houses were attacked by night in the Greek mountain village of Xirovalto in the Pogoni municaplity, near the Greek-Albanian border, 195 miles southwest of Thessaloniki, and other villages, in February. Most recently, the Institute of Cultural Heritage of the Ministry of Culture announced that visitors to several Orthodox churches and monasteries must now pay for entrance. The new rule applies only to Orthodox churches.

In an interview with Greek journalists, Abp. Anatasios described the publication of the controversial book as an attempt “to destroy the harmonious existence of various religions,” and stressed that the attack on Orthodoxy “goes beyond the bounds of blasphemy against sacred ideals.”

The publication of the book has caused a wave of public outrage in both Greece and Albania.

St. Kosmas of Aetolia (1714-1779) is commemorated as an Equal-to-the-Apostles and a hieromartyr. Throughout his several missionary journeys, he founded more than 1,000 educational institutions and halted the Islamization of Albania and Northern Greece.

Albanian nationalists believe the activities of St. Kosmas prevent the creation of a “Greater Albania” and have often launched attacks against the Orthodox saint. Albania begins charging for entrance to Orthodox holy sites
Pilgrims and visitors must now purchase tickets for the privilege of entrance into several Orthodox monasteries and churches throughout Albania, according to a recent governmental decision. Another Orthodox church profaned in Albania
The desecration of Orthodox churches, monasteries, and holy sites has become common practice in modern-day Albania. The latest scandal was caused by a report of the TV station Top Channel. Destruction of Orthodox holy sites continues in Albania
The Orthodox heritage in Albania has suffered another blow with the decay of the Monastery of St. Athanasius in Kato Lenitsa, founded in 1797. Due to the idleness of authorities, who confiscated the monastic buildings but undertook no measures to restore the landmark, the monastery sustained irreparable damage in the winter of 2017. Request for the Return of Churches, Monasteries and Sacred Objects
Photos that show young girls advertising wedding dresses on the despotic throne, or in front of the Beautiful Gate and iconostasis icons, specifically inside the historic Orthodox churches of Berati and Elbasan are a great insult to the Orthodox Church.

Albanian Church of St. Athanasius Suffers Two Attacks of Vandalism
The Orthodox Church of Albania condemns all such actions and calls upon its faithful to remain calm but resolute in defending their church and to pray for the repentance of the perpetrators. The Church has also vowed to rebuild the church of St. Athansius.
Comments

brenda bicki11/27/2017 5:35 pm
We are so comfortable here in America. Right now, we are experiencing a more subtle type of persecution and so casually stray from our Orthodox Faith or any Christianity. We act as if we don't need God and will solve all problems with our science, technology, and higher education. These advancements can be used for the common good of all if based on Judaic-Christian principles. Instead we use it for the destruction and dominance of others. Lord help us.
×