The Lord will force all to accept the autocephaly of the Kiev Patriarchate, schismatic synod says 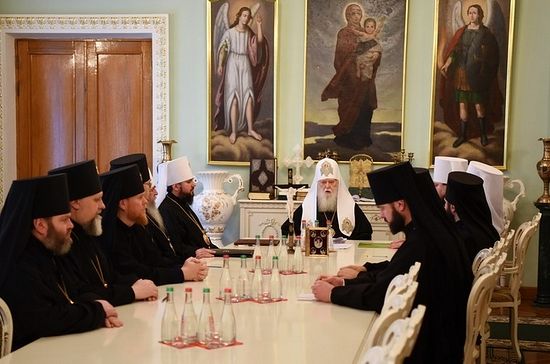 The synod of the self-styled “Kiev Patriarchate” (KP) have addressed their supporters and the Ukrainian people with an explanation of their position regarding the dialogue with the Russian Orthodox Church. The address from their session yesterday has been posted on the schismatic church’s site.

“We believe that the Lord will put all the others in such a situation that, whether by their own desire or not, they will sooner or later acknowledge the autocephaly of the Ukrainian Orthodox Church-Kiev Patriarchate, and will enter into Eucharistic communion with us,” the address reads.

“We, all the fullness of the Kiev Patriarchate, regardless of the success or failure of the current attempt at dialogue, should, as until now, preserve our internal unity, develop and confirm the Church, and serve God and the Ukrainian people,” the bishops continue.

The Synod of the KP asserts that they are “for dialogue, but only for the sake of affirming truth, and not to please the desires of men.”

“What are we ready and willing to dialogue about? About the cessation of hostility between the Orthodox, about the restoration of communion in prayer and in the Eucharist, about the Russian Church recognizing the autocephaly of the Kiev Patriarchate,” the KP leadership stresses.

Talk of dialogue between the Russian Orthodox Church, from which Denisenko schismed, and which therefore excommunicated and anathematized him, began when Denisenko sent a letter to His Holiness Patriarch Kirill and the Council of Bishops of the Russian Orthodox Church, expressing a desire to restore communion and asking forgiveness for all of his sins.

“Pat.” Philaret and the KP leadership immediately began backing off from the message of this letter, stating there is no repentance for their schism, and dialogue can only focus on granting autocephaly to the KP. It was recently reported that Philaret had sent a second letter to Metropolitan Hilarion (Kapral) of the Russian Orthodox Church Outside of Russia, expressing the conviction that unity in Ukraine can only be achieved through the granting of autocephaly to the Ukrainian Orthodox Church, though in context, he seems to be referring to the canonical Ukrainian Church, rather than the universally-unrecognized KP. Anthony12/14/2017 7:25 pm
Truly delusional nutjobs. Alongside all the others - Porky Poroshenko. His frienemy Saakashvili and others. All imposed upon the Ukraine by the usual suspects. Those lovers of freedom and human rights and democracy.
×