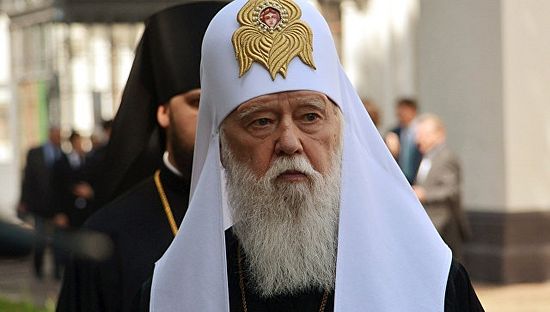 He also declared that he would not step down from his position as leader of the schismatic group, and that his church would insist upon the adoption of laws in Ukraine that would persecute the canonical Ukrainian Church.

“We are ready to create a commission. We are not refusing dialogue, but what dialogue?—the dialogue on the autocephaly of the Ukrainian Orthodox Church. If there will be such a dialogue, then we’ll go. If the dialogue is about a return to the Moscow Patriarchate, then we will not go to the dialogue. We don’t need that,” Philaret said today.

Press secretary of the Kiev Patriarchate Bishop Evstraty Zorya also earlier stated that Denisenko is prepared to dialogue about the granting of autocephaly, and nothing else. However, as Archbishop Clement of Irpin of the canonical Ukrainian Orthodox Church notes, Philaret’s letter actually says nothing about autocephaly, but speaks only of a restoration of Eucharistic communion.

In Philaret’s view, it was the Council of Bishops that decided the KP wanted to return to the Mother Church, saying, “It’s not us, but they, who want us to return.” According to the schismatic leader, he will never repent for “having chosen the path of autocephaly for the Ukrainian Orthodox Church.”

Chairman of the Moscow Patriarchate’s Department for External Church Relations Metropolitan Hilarion (Alfeyev) earlier explained that it was not the Council, but certain media outlets that misconstrued the intention of Philaret’s letter, as the bishops accepted his letter as a request for negotiations rather than for pardon.

“Pat.” Philaret also said today that the initiative for reconciliation between the ROC and KP came indirectly from the Moscow Patriarchate through Metropolitan Hilarion of the Russian Orthodox Church Outside of Russia.

However, the ROC denies this claim, insisting that it was the author himself who decided to address the letter to the Council of Bishops. The letter came by Philaret’s initiative, and “other versions of the story are, from our point of view, untenable, as we know how it happened—the letter came to us, and the appeal was from their side to Patriarch Kirill and the Council of Bishops,” Chairman of the Synodal Department for Church and Society and Media Vladimir Legoida stated.

Philaret added that he did not coordinate his letter with the Ukrainian authorities.

Further, the self-styled “patriarch” stated that he would not step down from his post, even if it helped the reconciliation and granting-of-autocephaly process.

“I will not step down from the Kiev cathedra until death,” Philaret declared. Rather, he has asked the ROC to declare null and void the excommunication and anathematization against him for having created and persisted in a schism.

While he speaks of reconciliation between the ROC and the KP, Philaret also stated at the press conference that the KP would insist upon the adoption of laws in Ukraine which would effectively persecute the canonical Ukrainian Church of the Moscow Patriarchate. Bill No. 4511, “On the special status of religious organizations with headquarters located in states recognized by the Verkhovna Rada of Ukraine as aggressor states,” proposes that such religious organizations be able to appoint metropolitans and bishops only in agreement with the governing authorities. The same bill also gives the government the right to forbid a confession if its representatives cooperate with religious centers in “aggressor states.”

The Russian Church’s Council of Bishops resolved yesterday to highlight the self-governance of the Ukrainian Orthodox Church in its Church statutes, creating a special section for the Church and noting that the center of its administration is in Kiev.

However, Philaret has called this decision a deception: “This is another deception of the public; there is no center of this Church in Kiev; the center of this Church is located in Moscow… Let them not deceive the people and parliament… They fear that a stain will be placed on this Church of the aggressor country, so they are now saying its center is not in Moscow but in Kiev. We will insist that the law be accepted.” Russian Church certain of authenticity of “Pat.” Philaret’s letter
The Russian Orthodox Church has stated that the letter received by it from former Metropolitan of Kiev and current leader of the schismatic “Kiev Patriarchate” (KP) Philaret (Denisenko) with a proposal to reconcile and to overcome the Church schism in Ukraine is real and written by Philaret himself.

Leader of Ukrainian schismatics Philaret reportedly asks forgiveness from Russian Orthodox Church
Philaret’s letter ends with “I ask forgiveness for every way in which I have sinned in word, deed, and in all my senses, and I sincerely forgive you all from my heart.”