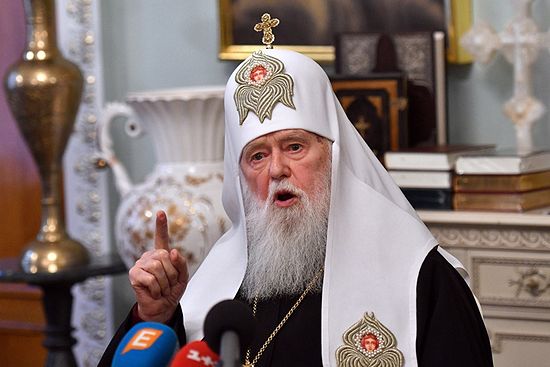 The full text of the letter of the self-styled “Patriarch” Philaret (Denisenko) of the so-called “Kiev Patriarchate” (KP) to His Holiness Patriarch Kirill and the Russian Council of Bishops was posted online by KP Press Secretary Archbishop Evstraty (Zorya) on his personal Facebook page.

The letter was accepted by the Russian Church as an important step to overcoming the Ukrainian Church schism, although Philaret later announced at a press conference that he is only interested in dialoguing with the Russian Church towards achieving autocephaly for his so-called “Kiev Patriarchate.” The letter, however, says nothing of autocephaly. 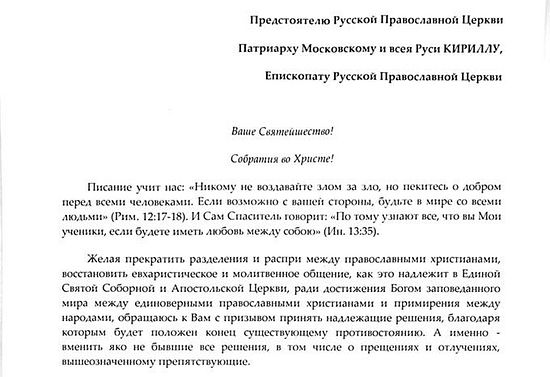 Your Holiness!
Brothers in Christ!

Scripture teaches us: Recompense to no man evil for evil. Provide things honest in the sight of all men. If it be possible, as much as lieth in you, live peaceably with all men (Rm. 12:17-18). And the Savior Himself says, By this shall all men know that ye are my disciples, if ye have love one to another (Jn. 13:35).

Desiring to end the division and strife between Orthodox Christians, and to restore Eucharistic and prayerful communion, as befits the One, Holy, Catholic, and Apostolic Church, and for the sake of achieving the peace between fellow Orthodox Christians and reconciliation between peoples commanded by God, I write to you with an appeal to make the appropriate decisions, thanks to which the presently-existing antagonism will be laid to rest, namely to nullify all previous decrees, including all punishments and excommunications which prevent the aforementioned.

I express the hope that from hereafter, God-willing, all other decisions ensuing from this, necessary for the good of Orthodoxy, will be made by you.

Many sorrows and strife have marred the relationship between the Orthodox in our countries over the years. May the day draw near when, according to the words of the Divine services of the Paschal feast, “[We] embrace one another, [we] call ‘brothers’ even those that hate us, and forgive all by the resurrection!” And I, as your brother and fellow servant, ask forgiveness for every way in which I have sinned in word, deed, and in all my senses, and I sincerely forgive you all from my heart.

With love in Christ,
Your brother,