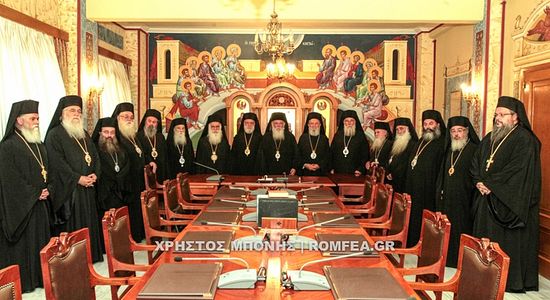 The Holy Synod of the Greek Orthodox Church held its December session yesterday and today, under the chairmanship of His Beatitude Archbishop Ieronymos of Athens and All Greece, at which it addressed the communiqué of the Bulgarian Orthodox Church on its decision to become the “Mother Church” of the schismatic Macedonian Orthodox Church, reports Romfea.

In addressing the Bulgarian Church’s November 29 decision to assume the role of “Mother Church” of the Macedonian Church, the Greek Holy Synod expressed its concern yesterday about the fact that the Bulgarian Church is thereby intervening in the jurisdiction of another Local Church, namely the Serbian Orthodox Church, from which the Macedonian Church schismed. In the Greek Church’s estimation, this constitutes an act contrary to the sacred canons and the Tradition of the Church.

Having examined the letter of Archbishop Stephan of the MOC, the Bulgarian Synod resolved that, inasmuch as the MOC has expressed its willingness and desire to accept the BOC as its Mother Church, the BOC is prepared to take on the sacred duty of interceding and advocating for the MOC with the other Local Orthodox Churches throughout the world, taking every necessary step to establish its canonicity.

The Holy Synod of the Serbian Orthodox Church also expressed its bewilderment and concern at the recent actions of the Bulgarian Church. Meeting on November 27, the Synod stated that it “was surprised by the decision of the Bulgarian Patriarchate” and that they “hope that the Synod in Sofia will adhere to the canonical order, given that the Archbishopric of Ohrid, headed by Archbishop Jovan (Vraniskovski) is the legitimate canonical Church in Macedonia, and this is acknowledged even by the European Court of Human Rights.”

Such intervention is, the Greek Synod argues, the right of the Ecumenical Patriarchate, and could be the beginning of difficult developments.

The Greek Holy Synod expressed its desire that prudence will prevail and that the decision of the Bulgarian Church will not be finalized. Serbian Church reportedly bewildered by decision of Bulgarian Church regarding Macedonian Church
The decision has caused anxiety among the Serbian hierarchy.

Walter1/29/2018 12:12 pm
Should the SOC, MOC and GOC each rigidly maintain their stance, nothing can resolve the stand-off and the unity of Holy Orthodoxy is once again hostage to politics and history. An "all or nothing" outcome is not feasible as progress cannot be made under such circumstances. Abuse and accusations achieve nothing except ill-will and even more intransigence by all. Politics and pride are at the core of this issue, not dogma or fidelity to the requirement that "we love one another even as I have loved you". It can and must be solved with wisdom, good-will and the understanding that all are our Orthodox brothers and sisters who manifest mutual respect. I pray for all who seek a resolution to this.