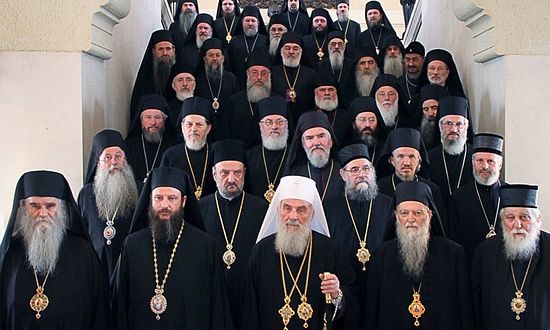 Having carefully considered the chronology of events in the relations between the BOC and MOC, and the recent decision of the Bulgarian Holy Synod, the Serbian Synod has expressed its concern about that decision.

The MOC asked the Bulgarian Church in November to establish “Eucharistic communion with the renewed Ohrid Archbishopric,” asking that that the Macedonian Church be recognized as autocephalous.

Having examined the letter of Archbishop Stephan of the MOC, the Bulgarian Synod resolved that, inasmuch as the MOC has expressed its willingness and desire to accept the BOC as its Mother Church, the BOC is prepared to take on the sacred duty of interceding and advocating for the MOC with the other Local Orthodox Churches throughout the world, taking every necessary step to establish its canonicity.

According to the Serbian newspaper, the Holy Synod of the Serbian Orthodox Church (SOC) held a regular session on November 27 in which it discussed the matter, stating that it “was surprised by the decision of the Bulgarian Patriarchate” and that they “hope that the Synod in Sofia will adhere to the canonical order, given that the Archbishopric of Ohrid, headed by Archbishop Jovan (Vraniskovski) is the legitimate canonical Church in Macedonia, and this is acknowledged even by the European Court of Human Rights.”

The Orthodox Ohrid Archbishopric under Abp. Jovan separated from the MOC in 2002 to seek reunification with the Serbian Church. His Eminence was then imprisoned for many years on trumped-up charges of “inciting national, racial and religious hatred, schism and intolerance.” At times he was placed in solitary confinement, and he was allowed few visitors from the Serbian Orthodox Church. He was released from prison on February 2, 2015, although new proceedings against him began soon afterwards.

Citing an unnamed source, Politika notes that the Ohrid Archbishopric was approved by the Serbian Patriarchate’s autonomy act which was signed by Serbian Patriarch Pavle on behalf of the entire Church, and which was confirmed by a decision of the Ecumenical Patriarchate. According to a 2002 agreement reached in the southern Serbian city of Niš, the bishops of the MOC agreed to return to canonical unity with the SOC, but after returning to Macedonia they reversed their decision.

Explaining the MOC’s appeal to the BOC, historian Alexander Rakovic of the Institute for Contemporary Serbian History argues that politics have influenced the matter. “The formation of the government of Zoran Zaev in Skopje has led to a revival of Bulgariophile currents in all structures of Macedonian society, including in the Macedonian Orthodox Church,” the historian explained.

Rankovic also added his opinion that the course of the BOC is contrary to the canons, immature, and incapable of healing the split with the MOC, as it has no right to represent the MOC, given that it actually schismed from the SOC. Thus, the BOC’s involvement is seen by some as a mere interference in the SOC’s affairs.

Emile12/22/2017 7:21 pm
As an orthodox without Balkan roots,I think those tiresome disputes,indeed,are originated in Ottoman times and the Turkish "millet"especially in the late 19th century with the attendance of religious-nationalism,called phyletism,always condemmed by local conciles.
It's a pitty.

Kosta 12/16/2017 2:51 pm
Actually Marc, everyone that has any sense of historical truths does care about what Skopje calls themselves, especially when they are annexing another nations history and cuiture. This article is factually incorrect, Macedonia is already under the auspice of the Greek Orthodox Church, Republic of Skopje is what this article is referring to. Bulgaria and Serbia can fight it out for which church these unbaptised Skopjian Slavs should affiliate with!

Marc Bolan12/14/2017 3:38 pm
Anthony, your comment has less than nothing to do with the actual content of this article.

The nation and church obviously have the right to name themselves anything they want. No one outside some Greek bubble cares about this tiresome dispute.

Anthony12/14/2017 3:23 pm
Hello. Good morning. Okay. Could we get something correct here. "Macedonia is Greek." Therefore the correct terminology to be used is "pseudo Church of Skopje". Thanks. Have a nice day.
×