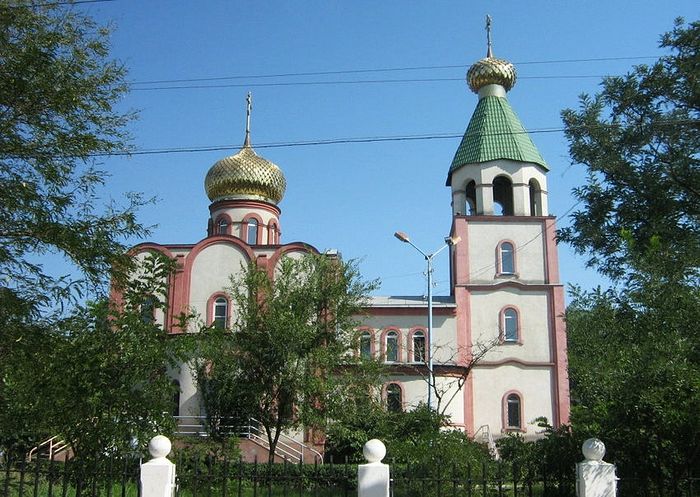 The Cathedral of St. George where the shooting took place. Photo: http://sobory.ru

ISIS has claimed responsibility for the deadly shooting that took place on Sunday at the Cathedral of St. George in Kizlyar, Dagestan, Russia.

A young man opened fire on parishioners exiting the church on Sunday, leaving five women dead, two more parishioners wounded, and two security guards wounded. Four of the women died instantly, while the fifth later died in the hospital. The parish had just served the Rite of Forgiveness in which everyone asks for and offers forgiveness for all their sins against one another, thus entering the Great Fast, and for these victims, eternity, with pure hearts.

The gunman, who was shot dead by police officers after he tried to escape, was later identified as Khalil Khalilov, a 22-year-old local resident, reports The Irish Times.

In a statement issued by its Amaq news agency on Sunday, ISIS claimed responsibility for the attack, saying the shooter was one of the “zealous soldiers of Islam.” The authenticity of the claim has not yet been established, although the site is often used by ISIS for militant statements, reports ABC News.

The Russian Investigative Committee has announced that it will consider all possibilities, including that the shooting was a terrorist attack, according to Interfax-Religion.

The two security guards who were injured are Muslims.

Videos have been circulating on Russian social media showing the man approaching the church with his gun. After the first shots rang out, parishioners closed the door to prevent the shooter from getting inside and harming more people. There were about 50 or 60 people inside, including children and pregnant women according to Fr. Pavel Kalikin.

ISIS established an affiliate in the volatile Dagestan Republic in 2015, and has since claimed responsibility for several violent attacks on local police officers. ISIS responsible for St. Petersburg attack, expert believes
According to the relevant investigative committee, the perpetrator of the terrorist act, Akbarzhon Dzhalilov, was born in Kyrgyzstan in 1995. Anthony 2/20/2018 8:49 pm
The devil's workers in the west must be rejoicing that the monster they have created has once again struck and caused yet more misery.
×